REVIEW: The Shepherd and The Solicitor by Bonnie Dee and Summer Devon 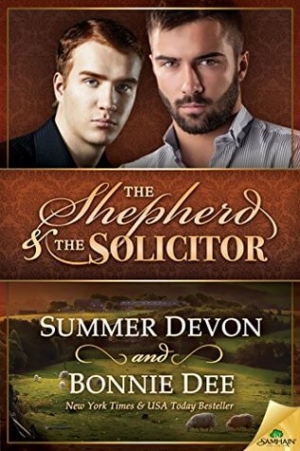 When a storm is brewing, taking shelter could be the most dangerous move of all. One careless, public sign of affection cost Daniel Pierce’s lover his life at the hands of a hate-filled mob. Grief-stricken, Daniel retreated from society to a sheep farm in the wilds of the north. Years later, Gregory Tobin erupts into his solitary life. Sent to confirm the existence-or the death-of the Pierce family’s lost heir, Tobin isn’t sure he’s found the right man. The gruff, shaggy hermit calling himself Jacob Bennet bears little resemblance to photographs of the younger Pierce. Tobin needs more time to study his quarry. With lambing season in full swing, Daniel grudgingly admits he could use an extra hand. Through a long, exhausting night, they parry back and forth as Tobin probes closer and closer to the truth. And something beyond casual attraction simmers between them. They come together in a crash of desire, but ultimately Daniel must overcome the terrors of the past to reconcile the man he was with the man he’s becoming-a man capable of loving again.

I have enjoyed a lot of your collaborative works in the past, and I miss reading m/m historical romances, so the moment your book was available to purchase on Amazon I one-clicked. The romantic in me was very happy after I finished reading this story. But the lawyer in me wanted to smack Gregory Tobin and smack him hard, which was unfortunate, really, because I liked so much about this book. Daniel Pierce left London society after his lover was killed by a mob and nobody but nobody had lifted a finger to help, including the policeman. Daniel was very rich, but he left without sorting out his affairs, which made sense to me because he literally was not in the right state of mind from grief to think much. He grabbed whatever money he had with him (from what I understood) and ended up becoming a farmer and loving it; he learned a lot about sheep and seemed to like the work a lot.

Now, four years later, the other shareholders of the company in which Daniel still holds primary stake in want him found or declared dead, and Gregory Tobin, a solicitor in one of the London firms, is dispatched to see if the person about whom somebody tipped them off is truly Daniel or not.

I thought the meeting between two men was written in a believable way. I was ready to roll my eyes because Tobin does not confront Daniel (who is now calling himself Jacob) right away and was thinking – oh, here we go, the conflict which is not really a conflict but will stretch for the whole story — but I felt better almost right away. Tobin does not confront “Jacob” immediately simply because he is not sure whether he has found the right person. He is a kind person, optimistic person who cares about his job, but he also understands that if the heir of one of the richest families in London vanished without taking care of his affairs, he must have had good reasons to do so. At first Tobin is not sure whether the gruff-sounding farmer who looks like he is very used to physical labor is a gentleman by birth. To the writers’ credit, he *is* sure pretty fast – after all, the guy looked very similar to the picture Tobin had seen, he notices books in the house which hint that Daniel/Jacob may not have been a farmer all his life, and the farmer’s accent does not stay the same (it goes back to being a Londoner’s when he is agitated). The confrontation is postponed (not for too long, do not worry), but as I said I believed in it – after all Daniel/Jacob was not exactly welcoming somebody violating his privacy. Tobin decides that he needs a few more days and pretty much insists on helping Daniel with his sheep. There are a lot of sheep in this book and surprisingly I enjoyed that quite a lot. I thought Tobin’s persistence in getting Daniel to talk was sweet – sometimes borderline annoying but sweet at the same time.

These writers are amongst the *very* few m/m writers who can make Insta!Love work for me. I am not sure how they did it here. I wish I could say that this is just Insta!Attraction, and I have nothing against that if the story is about the beginning of romance, where two guys decide that they want to give a new relationship the chance to develop into something more. This story started with Insta!Attraction, but I thought that few days later two men developed *very* strong feelings and in most other books I would have scowled at such rapid falling in love as not believable in fiction. Somehow in this one it worked for me.

If you recall, in the beginning of this review I said that I really wanted to smack Gregory Tobin and hard. This is because unless 19th-century British solicitors had widely different ethics of behavior from lawyers in the later centuries, I think a lawyer who is thinking about making sure his lover gets the best deal out of a business transaction with *his actual client* deserves to be smacked. And I don’t think the ethics were that different, because Gregory seems to recognize that he does not do the best job he can for that client.

To Tobin’s credit, he kind of comes to his senses and suggests that his lover hire his own lawyer to fight for his interests, but I still thought that he did not do the best job he could for his own clients. And I am getting angry all over again thinking about how he refused to deliver the buyout offer from the board of directors to Daniel, because it was not fair to Daniel. No, it was not fair. Guess what? You still do it, or get out of the case if you feel that you cannot do it. Thank goodness Tobin eventually came to his senses.

→ Sirius
Previous article: REVIEW: Toward the Sunrise by Elizabeth Camden
Next Post: REVIEW: Wicked for You by Shayla Black