Readers of The Understatement of the Year met Bella in that book. Bella is a senior at Harkness College and team manager for the school’s hockey team. Bella has also slept with several members of the hockey team. What I loved about Bella in The Understatement of the Year was how totally unabashed she was about sex. She was totally at home in her own skin and when the hockey player she’d been seriously crushing on (and occasionally hooking up with) turned out to be in love with one of his teammates, my heart broke for her. 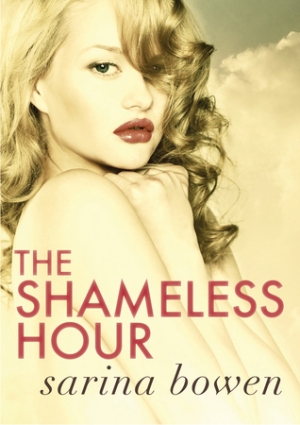 The Shameless Hour introduces us to Rafe, a sophomore at the college. Rafe comes from a religious Dominican family and hasn’t had opportunities for sex with either his high school girlfriends (brought up in similarly religious families) or with his longtime college girlfriend Alison, who thus far hasn’t seemed interested. However, they are finally planning to do the deed on their birthdays, which fall on the same day, when another guy beats Rafe to Alison’s door and says he was her summer fling.

A heartbroken Rafe comes back to his dorm room but both his roommates are getting it on, so he sits in the stairwell in his dorm with the bottle of champagne he had bought for celebrating with Alison. And that is how Bella finds him. They go to her room where one thing leads to another, and Bella takes Rafe’s virginity without ever realizing that he was a virgin. Afterward, Rafe feels ashamed of the way he’s treated her and of indulging in a casual hook up, so he hightails it out of there, which makes Bella feel rejected.

Rafe later tries to make it up to Bella by asking her out to dinner but by then she’s not interested in him anymore. She even hooks up with a frat boy, Whittaker, who turns out to be a real asshole, and who gives her an STD. After seeking treatment for the latter, Bella womans up and informs Whittaker, and he repays her good deed with a horrible one.

He has one of his frat brothers slip a drug into Bella’s drink, and Bella passes out. When she wakes up there are horrible slut shaming words written all over her arms and legs, and thanks to being drugged, she is barely able to make it out of the frat house on her own recognizance.

Rafe is there for Bella when she feels shamed. They are in a class study group together and he uses that as an excuse to check on her and make sure she’s eating enough and later, he gets her to leave her dorm room, where she’s been hiding from the world. The two become friends, and eventually, both want more. But Bella doesn’t do relationships — she’s been badly burned by them twice in the past — and Rafe doesn’t do casual hook ups. Can these two find a way to be together? And will what happened to Bella be avenged?

Earlier this month, Kaetrin reviewed The Shameless Hour and gave it a grade of A-. While I also enjoyed the book a great deal, I felt ambivalent about some aspects of it, so my grade for it won’t be as high.

I find your voice almost irresistible, and I don’t know if I could dislike anything you write. The Shameless Hour was incredibly readable. I love Bella – let me say it again: I love Bella – and therefore I was very invested in her fate.

I really liked Rafe, too. He was very mature for his age and had a sense of responsibility that I appreciated. I also appreciated his Dominican background, and though it might have been nice to have a bit more about soccer, his sport of choice, in the book, I liked that not much was made of his being a jock. Instead the focus was on his work at his mother’s family restaurant and his striving to succeed at school.

It was nice to have a gender role swap, with the heroine as the sexually experienced, one might even say rakish one, and the hero virginal and preferring a committed relationship to casual hook ups.

With all that said, I did have some issues with the book.

Bella’s utter unashamedness is what makes her such a great character. To see her feel ashamed was really heartbreaking and I wondered if we needed to go there. She was no less heroic before that happened to her, and I would have rather seen her stay unabashed about her sexuality even as she fell in love.

Second, the plot reminded me a lot of that of your novella, Blonde Date, because in both narratives we have a sexually adventurous heroine being made to feel scared and unsafe by a fraternity misdeed, but then the sweetness and support of the virginal hero helps her heal. Even though the characters differ, the storylines are similar, and that made me feel like I knew where this one was going.

Third, even though I liked Rafe, and felt he was a true friend to Bella, I just didn’t feel this couple as much as the couples in earlier books. I didn’t feel strong romantic chemistry there, or get a sense of what it was that Bella and Rafe had in common. Rafe was great for Bella during a tough time in her life, but I wondered if they would have gotten together if the horrible incident hadn’t happened.

Even in the epilogue Rafe was in a caretaker role; Bella was sick and Rafe brought her orange juice. I would have liked to get a sense of how the relationship would work when Bella was happy and well, or if Rafe had a bad day.

On another topic, I wished that Bella hadn’t been replaced as team manger of the hockey team. Bella loved the sport so I would have liked it to stay prominent in her life.

I agree with Kaetrin’s point that the justice Bella gets feels insufficient. There is another development later on in the book and I felt that did more to even the scales, but I wanted even more.

I am looking forward to a book about Bella’s reclusive neighbor, Lianne, because as a young movie star she has an interesting background.

I had a great time reading this book and when it comes to grading it, I have to reiterate that I love Bella’s character. It is so rare to see a heroine like her in any kind of romance that even though I have some qualms about where the plot took her, I’m giving this book a B-.