I admit I passed this book over when it first came across my desk. The cover, the story blurb all seemed a little twee to me. It’s largely about the fae and I’ve never really been interested in that fantasy world. Months later (the book was released at the end of October 2011), I’ve heard quite a bit of buzz about the book and two of my trusted recommenders, Elyssa Papa and Has Bookpushers, told me it was right up my alley. It is in first person present tense which I often profess to hate but frequently read with great enjoyment. You slide right into the view point of the heroine and the tense of the words disappears. 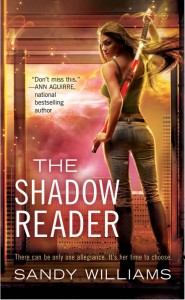 I enjoyed the concept, the plot and the world but the ending was disappointing. The story is told in the first person and the way in which the story resolved was unsatisfactory. I wasn’t ready for McKenzie to make a decision and I thought the decision she made wasn’t made with much thought.

McKenzie Lewis is a shadow reader which means she can read the location of fae when they “frissure” or trace from one location to another. This skill of hers was discovered when she was a late teenager. When she began to see and talk to people that no one else could see, this led her family and friends to believe she was having a mental breakdown. At one point, McKenzie was even institutionalized. Sadly, large swaths of McKenzie’s backstory is glossed over, particularly how she escaped the psychiatric hospital. The human roots of her life which played an important motivational factor in McKenzie’s story was the weakest drawn.

A series of events played out which made McKenzie amenable to an offer from the King’s sword master, Kyol, to help them hunt down a rebel faction of faes. For ten years, McKenzie has helped the Court fight its civil war. McKenzie never doubts for a minute that she is on the right side of things until she is captured by the rebels and made to rethink her position with the Court. The rebels present to McKenzie the most desirable fruit of all – acceptance of a fae/human relationship. McKenzie and Kyol have loved each other for 10 years, but romantic liaisons between humans and fae are forbidden by the court and Kyol, a man devoted to his king and his service to the Court. In fact, at one point, McKenzie voices her admiration for Kyol’s principles:

I protest, but he smoothes down my clothes with an apology and a light kiss on my cheek. His fingers slide from my skin, and the heat of his lightning fades away. It feels like a part of my soul fades, too. I’m still breathing hard, but the air I draw in is cold and empty. When he fissures out, I want to be angry. I want to hate him for his self-control, for leaving me when I’m craving more than his touch, and for not being a typical, human male. But I don’t hate him. If anything, his restraint makes me love him more.

Aren, Kyol’s shadow in the rebel court, apparently falls for McKenzie right away. I’m unsure why. Both Kyol and Aren are a mystery. This is a problem in first person books but it was heightened here when the interaction between all the characters are limited. Aren begins a campaign to place seeds of doubt in the rightness of McKenzie’s work for the Court. The Court had never taught her their language but Aren will. The Court forbids romantic relationships between humans and fae but Aren shows her that they support that relationship within the rebels. The Court is engaged in nasty inhumane acts against the rebels and the rebels are just fighting for survival, says Aren.

The love triangle between Aren, Kyol and McKenzie is used to highlight the opposing sides and to show that neither side is wholly good or wholly bad which I think was one of the better reasons to incorporate a love triangle. Yet, the insertion of the romance occurred at ill timed moments when I thought the various entities should be more interested in protecting themselves than kissing. I was also concerned that she was fae spelled. It seemed like the fae’s natural charisma could affect her, even against her will. Time and again, McKenzie mentions being affected by the edarratae

I break eye contact, willing my body to cool and berating myself for reacting to those soft silver eyes. I try to tug my hand free again. I need his edarratae gone so I can think clearly.

This close, I can become lost in them, especially with the heat of his edarratae traveling up my arm. He dips his head, staring down at me with mirth on his lips.

and one human’s reference to it:

“I highly recommend it,” he continues. “Sex with the edarratae . . .” He shakes his head and a small smile tugs at his lips. “Trust me, you’d love it. You’d never want to be with a human again.”

The largest problem I had with this book is that McKenzie makes a choice at the end of the story. On the one hand, perhaps it is good because while this is clearly the beginning of the series there is a definite end to this book. On the other hand, the conditions under which McKenzie makes her decision are full of emotion and heightened danger. I wanted her to step back and say to both men that she need time to herself to evaluate the role she wanted to play in the fae world, how she was going to reconcile what was happening to her with her desire for a “real” life.

So why the B-? Because the voice is great, the pace of the book is just right, and I enjoyed a book about a fae which means the storytelling was compelling enough to override my initial hesitations. I would recommend it to others with the caveat that the ending might be a let down. B-