REVIEW: The Secrets of Mia Danvers by Robyn Dehart

The Secrets of Mia Danvers is implausible. It features Jack the Ripper as the villain. The heroine is beautiful, blind, abandoned by her family, and a stellar sculptor. The high and mighty hero pursues another woman while seducing his true love.

These elements should have made your book a chore to read but, surprisingly, they didn’t. The Secrets of Mia Danvers won’t make it onto my list of ballin’ bodice rippers (my favorite historical romances), but I enjoyed it. Readers looking for an easy summer read probably will too. 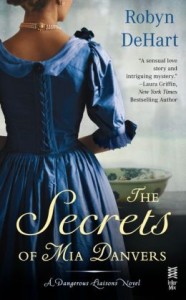 The book opens with a mother behaving badly. Mia Danvers is sixteen years old and was blinded in a recent accident. Her mother (and two sisters) essentially abandon her. They take her to a small cottage near Hyde Park on the edge of the Duke of Carrington’s land where they leave her to live out the rest of her life alone. Mia is saved from utter desertion by her governess Rachel who, after taking the mom to task for her egregious behavior, announces she will stay with Mia as an unpaid companion.  The evil mom and sisters drive away and Mia begins her new life.

Boom: six years have passed. Mia’s become not only able to navigate her life in the cottage, she’s a successful sculptress, and can make her way around the estate. It would have been intriguing to see how Mia learned to do all this, but that information isn’t shared with the reader. I rather wish it had been. It would have been interesting to see Mia adapt.

One night Mia is out taking one of her regular walks about the estate when she hears a murder taking place. She can tell by the sound the killer has slashed the woman’s throat. She also takes in the very distinctive smell of the tobacco he smokes. The killer walks away whistling, unaware there’s a witness to his crime. Mia goes straight to the current Duke of Carrington to inform him of the crime committed on his property.

The Duke, Alex Foster, is new to the job. His elder brother was killed in a duel over the wife of a Marquess. Now it is up to Alex to carry on the Carrington mantle. First thing on his now-I’m-a-Duke-to-do list is to marry a worthy Duchess. He’s already got one in mind, the lovely Juliet Beckinsale who was his brother’s intended.

Alex is contemplating his responsibilities when Mia is announced by his butler. He is at first displeased to see her. It’s late and she’s dripping on the carpet.

“Madam, what is it that you think I can assist you with? I do not like being disturbed this late in the evening. Nor do I appreciate you soaking everything in your wake.”

She blinked and took a few shuffling steps forward. “My Lord, my name is Mia Danvers, I live in the cottage at the edge of your estate.”

“My God.” He’d never met her before, at least he did not remember if he had, but she’d lived on their property for nearly eight years. An agreement between his late father and her parents, an agreement that had been written into his father’s will. Alex remembered his mother saying once that the poor girl was mad. But up until now they’d never had any trouble with her. In fact, she’d kept to her own and out of sight, so Alex had never questioned her living arrangement. He studied her now, taking in the frantic, almost crazed, expression on her face. It might be time to reexamine the situation, search for a way around his father’s odd demand.

“Miss Danvers, what are you doing away from your cottage?” he asked, voice firm and authoritative. She needed to know this sort of behavior would not be tolerated, regardless of what his father had agreed to.

She craned her neck awkwardly to the right, then moved in that direction, heading straight for the fire crackling in the hearth. But she ran right into a chair. With her hands she felt around the piece of furniture, moving around it as she did until she stood directly in front of the fire. She silently warmed herself for several moments before she spoke.

“I witnessed a murder tonight. On your property.”

Alex thinks she’s nuts. He tells her obviously she couldn’t have witnessed anything and dispatches her back to her cottage. However, when three hours later, the body of a young woman is discovered on the edge of his property, he begins to believe her. He summons her the next night and is taken aback when she, using her highly developed sense of smell, deduces he’s been out on the town.

“I can smell perfume on you, a couple of varieties as well as scented waters for hair rinses. Decidedly feminine smells so it seems logical that perhaps you’d danced tonight,” she said.

He stopped walking, just stood still. The fact that she could know that simply by the smell of him felt awkwardly intimate. As if he stood before her an open book ready for her to peruse and discover any of his secrets. Not that he had any. He lived a reputable life. He was a good man with very few vices.

This is one of those plot things you just have to buy into in order to enjoy this story. Mia has a Sherlockian ability to identify smells. The book is full of revelations like the one above. She can identify almost any smell, even when many are combined.

Mia thinks Alex is a bit of an ass. He seems, to her, arrogant, rude, and a bit of a prude. He’s just the sort of man she might have had to marry had she not had her accident which, somewhat unbelievably, makes her almost glad it happened. Mia is completely in charge of herself and she has no interest in anyone telling her what to do.

Alex thinks Mia’s hot. When he learns of her pedigreed background from his mother, he wonders what if she’d never been blinded.

She was a Danvers, a well-bred lady. That fit. She was lovely and graceful. And had she not been denied a Season of her own, she no doubt would have had her selection of suitors. Perhaps he would have thrown his hat in her ring. She was different enough to be interesting, but of good breeding to ensure she could have made a good duchess. He shook his head. It was a futile thought. Blind girls weren’t the stuff of duchesses.

Alex and Mia spend time together trying to track down the killer whom the reader realizes is Jack the Ripper. I enjoyed the mystery aspect of The Secrets of Mia Danvers although if Ms. Dehart’s new series (this is book one in Dangerous Liaisons) continues to revolve around the famed killer, I’m not sure I’ll keep reading. I have a limited tolerance for entertainment based on the Ripper.

That said, in this book, the plotting is sound. The Ripper continues to kill even when he learns there’s a witness to one of his murders. The suspense ratchets up as Alex and Mia hunt the Ripper who, in turn, stalks Mia. The killings are vividly described but not gory and each time the Ripper kills, he leaves behind more clues for Mia and Alex to track.

I was less enthused about the relationship between Alex and Mia. Alex is all lust lust lust for Mia even as he tells himself he’s better than that. He courts his putative fiancée even though he’s rounding the bases with Mia. For her part, Mia is seriously sexually assertive. She figures since she hasn’t a future with any regular guy, she might as well go for broke with Alex. Their interactions are steamy and well-written but lack the emotional underpinning needed to ground their relationship. And while it’s cool that Alex, for most of the book, treats Mia as his intellectual equal, I found the disparities in their power structure disconcerting.

The better romance which is given far few pages is that of Rachel and Edward, the Earl of Fairbanks. Rachel rejected Edward years ago for reasons she’s always regretted and has never loved another. Edward is a close friend of Alex’s and thus again encounters Rachel. In the few pages Ms. Dehart devotes to their love story, she shines. I’ve rarely read a romance so sparely etched that has such lovely resonance.

The Secrets of Mia Danvers is a pleasant way to while away a few hours. Even with its stubborn blind heroine, the novel plays out along expected lines. However, it does what it does well. It gets a B-.