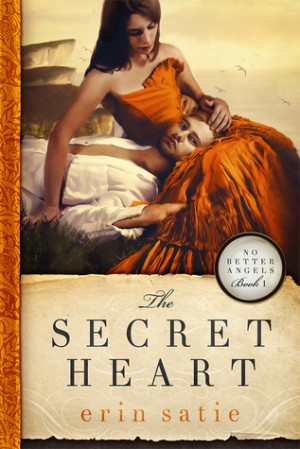 Disclaimer: The author and I were GoodReads friends and now follow each other on Twitter. This no doubt influenced my decision to buy the book, but I don’t think it influenced my review.

Set in the early Victorian era, this is a story about two people with disreputable passions. (Three, if you count the heroine’s friend, an artist.) Caroline Small is desperately clinging to a threadbare respectability. Her Viscount father and older brothers are notorious reprobates, but her dowry and good looks might land her a decent husband and a home for her sensitive younger brother — if her love of ballet is kept secret.

But it’s a love that requires daily commitment — “Remain not, therefore, twenty-four hours without practicing,” wrote the great instructor Carlo Blasis — and so Caro is forced to seek out a practice space when visiting her friend Daphne at the estate of the Duke of Hastings. Which leads to an unfortunate late night meeting with the duke’s heir, Adam Spark, who’s been out practicing his own secret passion for public boxing — unfortunate because Adam already looks askance at this visitor, who had warned Daphne that a proposed husband was suffering from a venereal disease. Adam isn’t particularly starchy, but he is a product of his time.

The Secret Heart is the start of a loosely linked series called “No Better Angels,” and “challenging heroines” might be its theme. Caro’s first response to the situation is to try to blackmail Adam. It’s a short step to attempting to force him to marry her.

This is the sort of historical that’s very much to my tastes. The language is fresh, the tone is serious, the stakes are high in an historically appropriate way, and there’s some heartbreak and redemption. Care has obviously been taken to establish the setting, but it also serves the characterization:

As she picked her way through the tufts of pricey grass toward the drop, the horizon rose to greet her. Bone-white limestone cliffs edged the coast, as though the island of Britain were part of an enormous white cake and some gigantic hand had sliced through the firmament with a serrated knife, separating off a piece.

Air thick with salt and the green tang of the sea scrubbed her throat and filled her lungs. Spreading her arms, she leaned into the wind and thought she might have come as close as she ever would to flying.

I love depiction of people with serious passions, so I was drawn to both of these characters. The descriptions of their highly physical arts combine realistic sweat and grittiness with the emotional satisfaction they derive from it:

“…Harris’s little henpecking touched matured into snappy bolts. He’d step in with a lightning-fast punch, retreat and leave behind a thunderclap of pain, booming out from the point of contact. Adam heard shouts of, “You got ’em!” directed at Harris, and friendly, half-despairing yells from the navies, “‘it ‘im back, Mumbles! Give ‘im ‘ell!”

The yelling jumbled together. Men shouted from every direction, so many voices it got hard to pick out individual words, and his memory supplied the rest.

His father, when he finally returned from Cairo: “You should be ashamed to stand before me alive, after killing my only daughter.” Alfie, on Hampstead Heather, when Adam couldn’t shoot: “The simplest things are beyond you.” Paul, at tea: “I know who I’d trust with my funds.” And Caroline Small, flushed and wistful and beautiful as a night-blooming orchid: “You do it because it hurts you.”
[…]
Adam took his place opposite, focused in on Harris’s battered face and thought: I can fight every single battle I’ve lost all over again, right now. I can make them all end differently.

Their passions for each other were a little less clear to me: I particularly would have liked to see (or understand) more of Caro’s thought processes and emotions. There’s an intriguing touch of Scarlet O’Hara to her:

Adam buried his head in his hands. “I can’t even look at you.”

Caro reach out to stroke his head. “You don’t have to,” she whispered, threading her fingers through the short, silky locks, the tips tickling her palm.

The muscles in his next and back tensed. Bracing himself. He’d ask her to leave soon, but until then she kept stroking his hair. That extra second or two, it was all she needed. It was everything.

She’d won him over once. She could do it again. She’d start from scratch.

It’s not a majorly sex-focused story, but sex is used to clarify the feelings between them in a way that I didn’t always find sufficient. However, if you’re not a fan of the current style of frequent narrative explanations, this might be the book for you.  And I was impressed with how the happy ending comes about — through the characters making the repressive mores of the time work in their favor.

Although The Secret Heart is a self-published debut, there are no errors that I noticed, and the quality of the writing is very good overall. There are times when the prose felt both too deliberate and a little obscure, particularly in descriptions of people’s movements: my mind stuttered on these, and several times I had to reread sentences to figure out what was happening. There are mystery elements that feel awkwardly inserted. And the awfulness of the many bad guys is thorough and without nuance: this didn’t feel implausible so much as exhausting.

I think this is a very promising first book, and I’m looking forward to the next one. Because of the writing style, I’d recommend this to fans of Jo Goodman, although the angst level is somewhat lower. B-