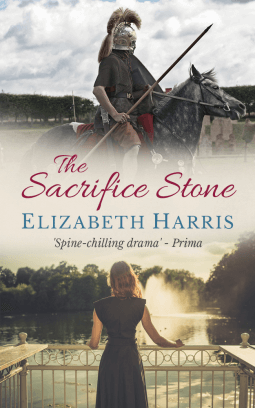 The present day: Beth Leighton arrives in the ancient Roman town of Arles with her brother, Joe, to investigate the story of a Christian child martyr, St Theodore. Legend tells that a young boy was killed by a Roman officer on a moonlit night at the pagan temple of Mithras, a victim of sacrifice.

Arles, AD 175: Walking the same streets is Sergius Cornelius Aurelius, an ex-legionary and the officer accused. Haunted by his past and by a perilous enemy which skulks in the shadows and will not show its face, he has his own story to tell.

At first Beth dismisses the tale and is irritated by Joe who consistently reminds her that she is only there to help him with his notes. So why, then, does she feel a tangible, mysterious presence wherever she goes? Joe doesn’t think she should get too involved and firmly believes that women are nothing more than cooks and secretaries. Beth, determined to prove him wrong and full of confidence from a recent promotion back home, becomes increasingly involved.

Then she meets Adam, a film researcher, who is driven, inexplicably, to find the truth behind the legend. As they explore the beautiful Provence countryside together, they are both moved and disturbed by the story of St Theodore.

A mystifying tale of love, honour and religion begins to unravel…

Soon their interest intensifies into obsession and dangerous emotions are unleashed as the ancient world, both magnificent and barbaric, becomes terrifyingly real … A miscarriage of justice has become legend and a force from the past is desperately trying to communicate the truth.

The Sacrifice Stone is a compelling roman mystery.

The blurb for “The Sacrifice Stone” intrigued me because of the combination of the mystery + historical Provençal Rome. I also wanted to see if and how Beth was going to overcome her PITA sounding brother. There are a lot of characters but the book is told only from the POV of contemporary Beth and ancient Sergius. Beth triumphs, the mystery is solved and justice seen to, I enjoyed Sergius in Arles but there were a few things that niggled my grade down a bit.

I wasn’t sure about Beth and the men in her family but from the very beginning I was reassured that she’s stronger than they think. While she might have given up on her father as a lost cause, she certainly stands up to Joe. Go, girl. She is not going to lie down and put up with family masculine oppression anymore. Adam saw Joe’s attitude and seemed like he was appalled at it. Even while she was falling for him, Beth ended up getting rather stroppy with Adam once after he’d driven her to her last wit’s end and I say good on her for it. She might have taken a lifetime to get to the point of giving the men in her life who cause her grief “what for” but now that she’s started, watch out. She’s glorious. And what she’s done educationally, she’s done for herself, on her own. I liked Beth – and her silent sarcastic, “British understatement” comments.

The present day stuff was good but I really liked the historical sections. Sergius (really, is this a Roman name??) was an alright guy with a low key sense of humor and a no nonsense style of action. He had a sort of M. Didius Falco tone and viewpoint on life and work. His recitation of a day at the Games in Arles was matter of fact, funny and then smoothly slid into a chilling description of the blood and horror of it all. The Christian victims were lucky that the lions were in a swift, killing mood that day.

The mood and tone of the book moved back and forth between humor, exasperation on Beth’s part about her brother, and menace. Woo-woo things quickly began piling up. Beth had noticed feelings, images, atmosphere, thoughts that are like people speaking to her. Bizarro things are moving right along but gaining a more sinister edge. When Beth learns that someone else has been having similar visions to hers, well, the “whoa and damn” factor went up, quite a bit up.

The mystery behind who was after Sergius, why Theo was targeted and how events, as historically known, will come to pass are slowly unveiled, hint by hint, detail by detail getting more dangerous as it went. It’s all sort of like the quicksand Sergius remembers as being so horrible which slowly sucks victims into death.

Sergius is an old soldier with a soldier’s respect for a fair chance for his opponents. It might have worked against him once or twice but I respected him for it. He also adores his beloved, firmly falling under her spell from the moment he meets her. Good man. There’s also a “we can all live together peaceably” message at the end that I didn’t mind a bit given the current state of world religious affairs.

I’ve got to admit though that sometimes Sergius isn’t the brightest bulb in the display, and he does tend to charge into things, even after he’s waited patiently before, thus allowing others to get the drop on him in critical moments. It’s obviously needed for the plot but makes him come off badly.

Beth and Adam are determined to get to the bottom of what actually happened in Arles and to Theodore. Sergius wants the truth known as well, hence the visions and paranormal experiences he channeled to them both. How did he happen to pick both Beth and Adam? Dunno, perhaps a Roman ghost is matchmaking.

The relationship between the two has been simmering along the whole time. Due to Beth’s experiences with her cranky Victorian attitude father and Edwardian attitude brother, Beth notices things about the way men act or don’t act and Adam is firing on all “up to date with modern times and women’s independence” cylinders. He also notices what is important to her and remembers to ask about it.

But wow, the twist at the end certainly had me sitting up and reading more quickly. The Roman ending is quite dramatic with further dangerous issues to be overcome and navigated. Yet there’s still a bit of deus ex machina to how everything shakes out. Okay maybe not totally but I felt a little bit of a letdown that Sergius, yet again, finds himself knocked out during the good stuff and has to be told afterwards by others who saw everything. But as Sergius has said many times, Roman public life is advanced by who you know and he knows a few important people.

The final resolution of the modern exploration of the truth behind the story of St. Theodore is almost mellow. Instead of drama, it’s more a quiet revealing of … not quite the truth but more a modern, slightly secular acceptance that what was being religiously trumpeted just isn’t so and a that no one’s too interested in probing any further. Sort of a shrug, so to speak. While that might not be a sturm und drang OTT drama, it’s actually more believable, when I think about it.

Upon reflection, there are a few little details that either got left out or I missed as I was reading. Nothing that truly throws a monkey wrench into enjoying the story but more like a little niggle, now how did that aspect occur? sort of thing. Still, the spirits are at peace now, Beth has firmly shown Joe she’s not taking any nonsense anymore, and two couples find love. B-