REVIEW: Redemption of the Duke by Gayle Callen 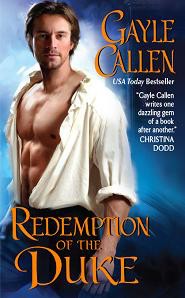 Redemption of the Duke was a good, solid read for me. While I’ve gone through a handful of your books, I had not read the other two in this series. I’ll probably pick them up soon, having enjoyed this one.

It was a shaky start, with a couple pages of blatant exposition, but it improved soon enough. Regarding the plot itself, you used none of my favorite tropes, but it still grabbed my attention continually. I don’t drift towards lady’s companion plots, mostly because I’m not huge on down-on-your-luck heroines. However, yours had a solid perspective on her experiences and wasn’t a blushing maiden afraid of her body. Thank you for sparing me that headache.

It’s also hard for me to build enthusiasm about one more duke in a sea of dukes. And don’t get me started on all the rakes; the romance genre could open a gardening store. It would be a very good-looking one with a number of interesting products for perusal, and an enormous section at the front called ‘Dukes’. Walking through the store, one would be like, “Seen it. Seen it. Got twelve at home. Ugh, they’re still producing that one? But it’s so cheap and it never lasts. They’re charging money for it?” It’d be a fun store to visit but very hard to find the right rake to bring home with you to…help maintain your…garden.

Although at first glance, it didn’t seem my type of romance, what caught my eye about your rake and made me want to read this novel was that he was trying not to be one anymore. Very soon into the book, I recognized his true effort to maintain the image of a mature adult in the face of his wild youth. He wanted others to realize he wasn’t the same person. Usually, you enter a novel with the hero at the height of dissipation. He meets the heroine, who changes him for the better, because god forbid the hero be able to change without the aid of a good woman guiding his morality. It was refreshing to see a man who was genuinely past his excessive days from the start of the novel. Adam longed for a more substantial life and wished others believed his sincerity.

Then with a sigh, Sophia rested her head against his shoulder. “I hear others talking about you.”
“Still eavesdropping?” he teased.
“How can it be eavesdropping when they’re speaking in normal tones? But I am not the only one who noticed the change in my big brother when he returned home from India. They keep asking when the real Adam will return.”
“Never,” he said simply.
“I don’t know about that. I’m not sure you’ve quite found the real Adam.”

The duke made a legitimate mistake in war and Faith’s brother died. Nothing was hidden. There were no misunderstandings. He was honest about it and no hidden truths gave the situation a more noble light afterward. No, it happened. He screwed up and it was ugly and Faith suffered, and he knew it. He kept wishing he could reconcile things with Faith because of his guilt, but he didn’t go overboard.

I didn’t like Faith as much as Adam because I saw her as sort of a doormat. She let others take liberties with her all the time and just passively withstood it: her former employers, her childhood friend, and even people who didn’t want to take advantage of her. She nearly encouraged it. I can’t stand a heroine who lets everyone walk all over her, as though it’s her due. I’m unable to respect it. Of course, she finally snaps with the duke, and I did value that change in her. I just thought it took too long to manifest and would have appreciated her realizing that he brings this out in her: the will to stand up for herself. That is powerful and I think it could have been delved into more deeply.

I saw the care you took in all your characters, neatly packing each one with flaws and virtues. It’s a subtle crafting, and I couldn’t help but be interested by every single character. The antagonists had curious, redeemable traits, and I enjoyed the mystery of the main antagonist’s hidden identity more than I thought I would, considering I usually don’t care for these evil mastermind schemes. It just made sense this time and the red herrings were well-played.

I loved the tension inherent in the situation you wove for Adam. He wants to be seen as mature and responsible. He tries so hard to honor Faith’s brother’s memory and respect Faith herself, as well as her position as his aunt’s companion. He is drawn to her. Not artificially drawn to her, like in some novels, where you’re supposed to nod and go along the supposed claims of foolish, besotted foolishness. No, he’s genuinely infatuated with her, and dislikes it. These are real, significant stakes at play. It’s a true man vs. self struggle, because if he takes advantage of the lady’s companion in his household, it means he hasn’t changed nearly as much as he hoped he had, and everyone is right in their assumption of his decadent reputation—except it won’t be based merely on past actions if he gives in now. His claims of change would be invalidated. And all the same, he must see her again, because she lifts that darkness inside him and makes him feel almost normal. I can understand exactly why he falls for her.

It’s a no-brainer why she falls for him as well. I honestly couldn’t find one thing I disliked about Adam as a character. He was kind and struggling and fiercely protective. He held a nightmare inside of him and wanted to shelter everyone else from it. He was good and fair with people who were not good and fair with him, as though he hoped, deep down, that someday they would like him. He was vulnerable but acted in strength. I wanted to hug him and tell him it’s okay, that he’s a good man and he’s worthy of Faith and of his station, and he can have both and still be good.

Thank you for giving me this experience with your hero. He was the highlight of a carefully-written novel. I was never blown away, but I was continually engaged. It’s a respectable entry in your repertoire and I’m glad to have read it.