REVIEW: The Rebellion of Jane Clarke by Sally Gunning

You are getting quite the reputation for writing detailed, women-centric books about Colonial life in America. “The Rebellion of Jane Clarke” is the third book which centers on the people of the village of Satucket on the island of Cape Cod and it takes us ever closer to the point where Britain and her restless and unsettled colonies will come into conflict over their fate. 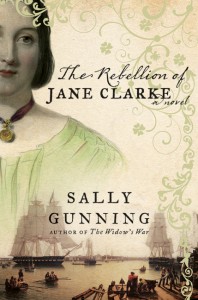 Jane Clarke has always been her father’s favorite which is why he’s probably so angry with her when she suddenly decides to closely question the man her father has all but picked for her husband. It’s not that Jane doesn’t like Phinnie Paine and she’s certainly aware that he’s probably the best catch she could hope for in this small community. But something makes her need to know where he stands on certain issues before she comes under his control after their marriage.

But Phinnie decides not to answer and instead quickly leaves the Clarke household. Refusing to write the apology to Phinnie her father demands of her, Jane is bundled off to look after an older, ailing aunt in Boston and discovers a town seething with thoughts of rebellion. Some colonists advocate a break with England – and will go to any lengths to instigate it – while others are horrified at the idea. When Jane witnesses a pivotal event which the would-be rebels attempt to use for their own purposes, she must decide how much she’s willing to do to see that her truth is known.

As with your other books, this one follows women of the time and how they dealt with and were dealt with by their men. A few had it good, such as Jane’s grandmother, but even she had only achieved a degree of power in her marriage the second time around. And Jane is a strong, thinking woman who would have frightened most men. She thinks for herself, reasons for herself, keeps up with what’s going on in Boston, asks uncomfortable questions and refuses to simply accept what men tell her. Not that she doesn’t make mistakes in her judgment but then she’s off the island for the first time in her life and suddenly surrounded by momentous events and people actively trying to sway her.

Jane is breaking free of restraints and control just as Boston is kicking over the traces. But she’s not some gung-ho rebel – she thinks about what’s going on and looks at all angles. She sees honor and injustice coming from both sides. Since we see things only from Jane’s POV and she’s still coming into her own, still firming her viewpoints, there are several issues and characters you keep us in the dark about. Jane’s run-ins with the various factions in Boston help her to begin to critically judge people and give her a perspective on Phinnie that she didn’t have while on Satucket.

Propaganda is a useful tool and has been for time immemorial. Jane learns first hand how it can be used, abused and manipulated to serve particular interests when she herself is involved in events which the rebels wish turn to their own advantage. This serves as yet another way to mature her in her judgment and actions. She begins as a very naive young woman who trusts that the truth can come out and be known then learns how hard it is to keep from becoming a pawn.

The time in Boston had to be such a freeing experience for Jane, even with the obligation she feels for her aunt. She’s out from under the control of her domineering father, hardly sees her brother and with her Aunt’s permission – for reasons of Aunt Gill’s own – Jane can move more freely than most young women of the time. Her choice to question her almost-fiance and halt the easy slip into the settlement of marriage took courage. Here it’s almost a done deal, arranged by the men in her life, when she decides she wants to know more about this man with whom everyone expects her to spend her life and who would assume control over her at that point. It would probably be a very unsettling thing for a man to come face to face with. Jane is not some biddable, compliant young woman, willing to accept what she’s told.

After she witnesses the “Boston Massacre,” Jane’s faced with the choice of speaking out or keeping silent. The tide is heavily against the British by then but Jane’s sense of honor won’t let her stand idly by. Her conscience demands she tell what she saw as truthfully as she can and by doing so, she remains true to the character you’ve given her. But as much as I enjoyed the ring side seat to events which I honestly have to admit that I haven’t studied much, I do wish there might have been a little more fire. Seeing both sides of a conflict is wonderful for getting a more unbiased view of it but does leave the passion that must have pervaded the times somewhat damped and lacking.

Jane’s time in Boston also shows her that maybe her father doesn’t know everything, that his judgment isn’t perfect, that what she once thought of as true might not be and that she can’t trust what anyone tells her as they all have their own agendas to push. She has to open her eyes, do even more thinking for herself and reach her own conclusions. She’s like Robinson Crusoe, cast ashore in Boston, and when she returns home, she isn’t and will never again be the same woman who left.

After just looking at a historical mystery wherein the lives of historical personages seemed to be totally reworked into deeds they never did, I appreciate the fact that when you insert actual people into your story, you take great care to use them correctly. Correct dress, correct actions, and correct language. And the truth is in this case as fascinating as any fiction could be.

Since it’s historical fiction and not historical romance, the book is mainly Jane’s path to knowledge of herself, her family and the political events of the times. There is some romance but it’s a long time in being realized and even at book’s end, it’s more open ended and a possibility than a fact.

It’s nice to see the historical detail just flow, almost effortlessly into the story. I never got the feeling that it’s being deliberately worked into the narrative or any awkward information dropping. No, “look what I found out and just have to include” moments. But what is with the cover of the hardback book? A dark haired woman in what is obviously Victorian dress and hairstyle instead of a blonde Colonial? I’ll just keep my eyes focused on the image of the harbor.

You write historical fiction from a woman’s POV which seems like it would limit how much you can get them into the action and still remain historically accurate. Yet I like to think that our foremothers were letting their thoughts be known to our forefathers even if the women weren’t front and center on the historical stage. The book is more about Jane and how the events and people around her shaped her instead of being focused on the events themselves. I would be curious to glance ahead into the future and see which side Jane supports once war breaks out. B-

→ Jayne
Previous article: Will We Ever Bring Democracy to Book Reviewing?
Next Post: REVIEW: The Secret Child & The Cowboy CEO by Janice Maynard