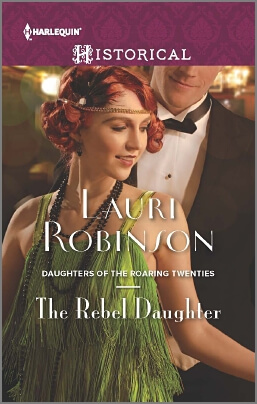 For every wild child…

No more watching from the sidelines for Twyla Nightingale: her feet are firmly on the dance floor! She won’t let anyone sour the delicious taste of freedom—especially not Forrest Reynolds, back in town after all this time.

…there’s a guy who thinks she’s the bee’s knees.

Forrest didn’t expect a warm welcome from the Nightingale sisters, not after their lives had been so dramatically upturned. But seeing the challenge in Twyla’s eyes, Forrest takes this rebel for a wild dance she won’t forget!

This third book in the Daughters of the Roaring Twenties series starts off with a bang as the sisters are finally pulling off the amazing party for gangster Palooka George at their family resort and posh speakeasy in Minnesota. Twyla, who is unapologetic about enjoying money and being in love with what it will let her buy, finally faces her nemesis and secret love, neighboring owner of the Plantation, Forrest Reynolds. Sparks fly and soon the two are back to their old habits of needling and verbally sparing with each other. But Twyla’s got depth too and part of her determination to live it up is due to having been corralled by her older sister for so long and also the death she saw during the flu epidemic that killed so many in her family and friends.

I thought, “Yay, interesting characters with issues and the 1920s.” Only soon after that the first fourth of story got bogged down in an seemingly endless round of telling instead of showing with lots of reiteration especially on Twyla’s part. I know she doesn’t trust men and that she thinks everything’s going to change. I didn’t need the repeat each chapter. She also won’t let go of her insistent determination that Forrest loves her older sister and he’s going to break up Norma Rose’s romance with Ty that we saw in “The Bootlegger’s Daughter.” Every time she returned to that like a squirrel to a nut stash, I wanted to scream.

Honestly, I was just about to give up on this book when the flying sequence took off – pardon the pun. That was charming and really showed Twyla and Forrest at their best and why they – unknown to each other – loved each other. Then the vague hints about Forrest’s past and his stepfather’s evil are explained and Forrest’s precarious position plus his efforts to warn Twyla’s father and protect her get some heft.

I also liked the way you integrated some of the things going on back then – bootlegging, opium running, even the Federal Reserve Act – as drivers for the plot. At this point, things moved from interesting to engrossing. By the time Twyla and Forrest were fighting with the thugs and driving for their lives while shooting a tommy gun out the back window, I was getting visuals worthy of a movie. I was even okay with the lengthy villain exposition since at least action was occurring at the same time.

Once the major plot issue was resolved, I wondered what the rest of the book would be about. Yay, it concentrates on resolving the romance. Everyone’s been telling Twyla that Forrest loves her but their skinny dipping talk was sweet to read and I believe that they’re both on the same page now and ready for their wedding. A plane ride to watch the fireworks is quite a way to wind up that day. I am intrigued by the hints about what the last sister, Josie, is up to and happy to see her book is already available from Harlequin. B-