I’ll confess that I had become disenchanted with your work. The grown up hookers with a heart of gold series followed by two dark and somewhat unromantic stories made me gun shy. But a free book of an author I’ve liked in the past? I can’t resist at least giving it a try and I am glad that I did. 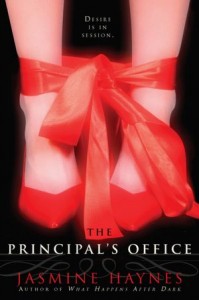 Rachel Delaney is a newly divorced single mom sharing custody of two teen boys with her ex husband. Before her divorce, she was a homemaker. Now she is working at a receptionist for a local company but her small salary doesn’t allow her for many extras even with her ex picking up the tab for the mortgage. Her eldest, Nathan, is playing Rachel against his father like a pro, starting to hang out with a bad crowd, and acting perpetually angry. Rachel would like something just for herself and while a lover would be nice, she’d settled for a vibrator.

In some ways, Rand and Rachel’s sexual interaction is much like a courtship. Even in this erotic book, their first encounter is relatively chaste, at least between the two. Rand’s neighbors are exhibitionists and Rand essentially sets up a first date atmosphere with wine on his upper balcony and a cinematic view of the neighbor’s hot tub antics. Every encounter that Rand and Rachel experience explore a few more fantasies from video taping themselves to participating in some exhibitionism themselves. Inevitably their physical connection brings them emotionally close. Rachel and Rand’s relationship is put on hold when she discovers that Rand is her son’s new principal, a man that her son hates.

As Rachel becomes more sexually adventurous with the encouragement of Rand, she gains confidence at work with the encouragement of a co worker. I felt that Rachel was blossoming into the person she could have been, not because she had a job and a lover, but because she began to identify herself as an individual and it was through those two vehicles that this came about. I enjoyed her recognizing that her skills as a mother translated into managing fractious co workers.

The one weakness in the story was Rand. The story could have been written in the first person because despite scenes from Rand’s point of view, he remained much of a mystery. He had little character movement and everything he did was exactly right. He knew exactly how to nudge Rachel into loosening her inhibitions, guessing exactly what would turn her on. He was able to turn her son around with exactly the right methods. I found him too good to be true and in many ways a flat character. I was also puzzled by his mantra that the laws of attraction bound his actions. The way he conducted his life didn’t seem as metaphysical as his philosophies would indicate.

The ex husband storyline was fairly predictable and while it was used to propel Rachel’s storyline and exhibit her newfound personal strength, I didn’t find the ex husband’s actions particularly believable which worked to lessen the tension that I believe it was supposed to present.

→ Jane
Previous article: REVIEW: Heat by R. Lee Smith
Next Post: How do I recover my ebooks if my harddrive crashes?