REVIEW: The Princess and the Hound by Mette Ivie Harrison 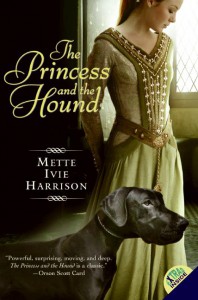 About one year ago, I had the pleasure of first discovering your novel, The Princess and the Hound, through my amazing school library. Now, a year later, the ARC of The Princess and the Snowbird is happily coming to me through the mail, and in preparation, I have decided to reread this old favorite.

The cover and back blurbs for your book fit together quite well, especially the main description:

"Beauty and the Beast retold – but the Beast is a woman"

It all fit together so perfectly, I had to pick up your novel.

While the premise is assumed to star Princess Beatrice, we actually find ourselves in the eyes of Prince George, her betrothed. For the first one hundred pages or so, we are treated to a fable about King Richon and the Wild Man, as well as George's boyhood. You set the stage well, by introducing him as someone   special, which is one of the many things that I have come to love about your tale. While he is a prince, you don't focus on his royalty as something major to his character, which is admirable. Instead, you focus on his ability to use the "animal magic', which allows him to learn the language of wild animals. We trod through his past leisurely, learning of characters such as his mother, who has the magic also. She teaches him to hide it from the cruel people of the kingdom, as they believe it to be evil. When she dies, you treat us to his other relationships, which are all fleshed out.

About a quarter of the way through, we get to the meat of the story, the real reason for reading. This is where you caught me as a reader. Prince George travels to Sarrey, the neighboring kingdom, to meet the woman he is going to marry in honor of his kingdom. And it's all because his father is getting ill, and George feels the need to do his duty. Not so romantic.

The traveling isn't much different. It's all standard medieval world travel fair, including meeting up with a man near-wild from the animal magic, until we get to the meeting scene. I'm a stickler for a good hero/heroine's first meeting with their one true love. And it's written beautifully.

He stopped short at the sight of a woman with streaming red hair coming toward the castle with a wild hound at her side. If George was not mistaken, it was the same wild hound he had dreamed of the night before.

But who was this woman? Her face wore a strangely distant expression. There was some old hurt in her, but from the way she held her head, she seemed used to pride. Her clothing was as rumpled as George's. The dress was cut with feminine frills that seemed entirely out of place on her. Yet she was beautiful, in a sharp and startling way.

He stared at her as she came closer.

She stopped when she came to him, then stared back unabashedly. "Prince George,' she said. There was no warmth in her voice.

How had she guessed who he was?

Then it came to him, and he flushed with embarrassment.

"Princess Beatrice,' he said with a nod. How could it have taken him so long to recognize her? The hound should have been a giveaway from the first moment. But the dream had confused him. The wolfish hound in his dream had been no pet.

The woman looked down at her hound, as if to see herself in those deep brown eyes. Then she nodded and said, "Yes. I am Princess Beatrice.'

There are so many wonderful characterizations up to this point – but Beatrice and her hound, Merit, take the cake.   Beatrice is unusually difficult, even by the new trend of spunky female leads seen today in young adult fiction, but she has moments of genuine softness that reflect a well-developed personae, and prevent the reader from finding her annoying.      Merit is much the same, but more soft than difficult.

The budding relationship between George and Beatrice is developed in much the same way; an odd balance that works.   It leaves much to be deciphered, but it’s plain to the reader that there is definite affection between the two.   With a submissive hero and aloof heroine, the relationship becomes a good motivator for reading through the story, even though the plot begins to become sporadic.

George then meets his future father-in-law, who is boorish and wanted a son and never got one, going through three wives and only being left with Beatrice. Not exactly the most original, but Beatrice's interesting character is worth the rather cliché situation. After spending time at the castle, George has constant dreams that are more like memories of Beatrice. It confuses him, as does his growing relationship with the girl and her hound, which is really where the novel shines. The confusing relationship baffles the reader in many ways too, but it's positively addicting. Even after learning secrets and things that seem to explain George's feelings, his love for Beatrice and Merit is confusing, which makes the story all the more realistic.

The plot is interesting enough, with figuring out who inflicted the illness on George's father, to trying to discover the purpose behind the bizarre attachment between Beatrice and Merit, but the small things, such as Beatrice's humiliation of a childhood tormentor of George, are what really make it worth reading. In a sense, the novel creates a romance that manages to reverse some of the gender roles we see so much in faux-medieval settings. Beatrice and Merit are strong and callous, though emotionally raw, and George is the one who is gentle and kind and protected.

While the novel has many good things about it, such as beautiful prose and wonderful characters, the plot is half-hearted and slow in some areas. Not to mention, the way it's written will turn off some readers. It's a literary fairy-tale, which is an interesting genre mix, but it doesn't appeal to everyone. Side-characters can come off as cliché, and some of the mysteries are easily solved chapters before the characters ever work them out, but for the most part, you manage to create a vivid character novel. Its attempts at being driven by plot, however, just don't stack up with the type of writing that's incorporated.

If the review were purely on self-enjoyment, this book would be an easy A. However, the fact that it's hard for some to get into or comprehend, along with some of its more clichéd romantic fantasy tropes, lowers it to a wavering B/B-. Despite these new-found flaws in your first novel, I still eagerly await the coming of The Princess and the Snowbird, and hopefully I will be in for another pleasant surprise among the pile of teen paranormals that crowd the market. Your first novel was original and innovative, and was well worth a look despite some flaws.