REVIEW: The Pig Did It by Joseph Caldwell

“The world, young man, you’ll find, is the strangest place in which we’re ever going to live. And strangest of all is the people in it.”

The title alone, “The Pig Did It,” was sufficient to make me want to at least try this novel of love, death or maybe murder, the sea reclaiming its own and a pig. The lovely cover, complete with the pig insert at the bottom, sealed the deal. I had to read it and there unto I used the last of a gift certificate given to me this Christmas past which had only been waiting for the right book to be spent on. Alas, that the book didn’t quite live up to my expectations of it. 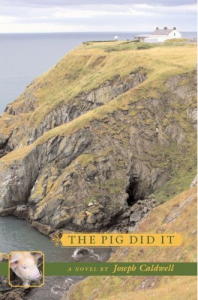 Aaron McCloud has returned to the land of his ancestors, his quite recent ancestors as his young Aunt Kitty, older than he by only two years, still lives there, in order to feel sorry for himself. He has decided that “the domesticated hills would be his comfort, the implacable sea his witness” as he obsesses over a young woman in his writing workshop who didn’t fall in love with him. But his plans for his self pity party keep getting put on hold as he runs into first an escaped group of swine, followed by the discovery of a shallow grave under his aunt’s cabbage patch. It is after this that his aunt Kitty, Lolly McKeever – who denies that an escaped pig who followed Aaron to his aunt’s house is hers – and Kieran Sweeney – a local man who obviously has strong feelings for Kitty – each accuse the other of murdering the man in the grave, one Declan Tovey, refuse to call in the police, then throw a riotous Irish wake which ends in a grand burial for Declan that literally brings the house down.

Poor Aaron has come to Ireland to wallow nobly and manfully in his disappointment over his non love affair with the indifferent Phila but never quite seems to get around to it. There’s always something to distract him whether it’s the pig which decides to claim Aaron as its own, the sea which Kieran declares has decided to claim Aaron for itself, a darts contest in the local pub or the skeleton which the pig uproots during its destruction of Kitty’s entire garden. Aaron wants to brood, he plans to brood but even with the best intentions, he is slowly cured of what he ultimately realizes is merely thwarted obsession rather than true love.

As I kept reading the book, it finally dawned on me midway that the book isn’t really about who killed Declan or whether the sea has decided to snatch Aaron, or if Kitty and Kieran, who love to hate each other and hate to love each other, will finally get together. Or even if Lolly and Aaron decide to start their own romance. It’s a slow, gentle, stately send up of Irish mist and mysticism at a pace which never hurries or rushes along.

There is humor throughout the story. The magical use of words transports me to the West coast of Ireland to a house about to fall into the sea or a pub filled with good hearted people. The pig amuses me and the soliloquies to which most of the characters seem prone delight me. And yet….the ending of the story is too quick and the declaration of love between one set of lovers comes from almost nowhere which in the end causes enough disappointment that I doubt I’ll continue on with the published second book in the trilogy much less the upcoming third one.