REVIEW: The Perils of Paulie by Katie MacAlister 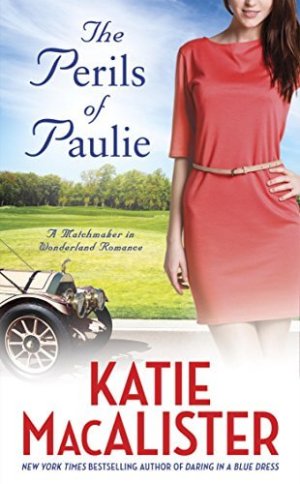 Sheltered by a strict father, Paulina Rostakova spends her time working for the family business and yearning for some grand adventure. So when contestants are needed for a reality show reenacting an historic 1908 car race across the US, Asia, Russia, and Europe, Paulie jumps at the chance to get behind the wheel of a vintage car.

Dixon Ainslie has nothing to lose by entering the race, except the rut he’s been in since the death of his girlfriend years ago. But as other racers begin to drop out, the producers want Dixon to join forces with Paulie—on one condition: they have to pretend to fall in love and get married.

And as their scripted courtship takes off, Dixon and Paulie will have to take a detour into reality to turn the sparks flying between them into a passion with staying power…

The third book in this series is the first I read but unfortunately, it looks like it’s going to be the high water mark for me. As with “The Importance of Being Alice,” there are things I liked about this book but a lot that just didn’t click for me.

Right off the bat I have to issue an Eyeroll Warning about Paulie’s Russian dad’s speech pattern. Was this supposed to be deliberate comic relief? I couldn’t get the cartoon character Boris Badenov out of my mind while reading his dialog. And yes, I know I just dated myself. How did Paulie’s Russian dad make the transition from possible mafia connections to becoming the flooring King of NorCal? Dunno but it gives Paulie lots of “dad has so much money and mafia connections that he smothers me out of concern” angst which propels her into taking part in this Reality TV recreation of a New York to Paris car race. Dixon Ainslie takes a little more persuasion but his love of antique cars eventually reels him in.

Okay Dixon’s dislike of being touched reminds me of someone I know. If she gets hugged, I can see her stiffen up and grimace through it. Dixon’s reactions send the initial mixed signals the plot needs to make Paulie worried about if Dixon likes her and to increase the time before the hawt sex starts. Seven cars start the race then across the US, they get whittled down. But then for three of them, we never really got to know those participants well at all.

Paulie and Dixon might initially have some touch issues but once they get past those, it’s no holds barred. Sheets are smoking for these “friends with sexy benefits.” They’ve agreed that this is just a fling with fun times to be had during the race. Until somewhere in Russia, when suddenly Paulie decides she’s in love. Points to Dixon for questioning this – is it love or just healthy lust? To me it seemed like lust.

The actual car racing is definitely secondary here and the racers – due to the modern engines and other assorted upgrades of the cars – don’t have as much trouble as I was anticipating. The main issues were the villains and their are-they-aren’t-they sabotage. Poor Dixon gets to spend a lot of time sleeping on what must be an uncomfortable back bench seat in an effort to prevent foul play. Fortunately this doesn’t impede the sexy times that much.

Paulie and Dixon take turns having bizarre behavior. Paulie when she insists on driving a strange man and his dog two days out of the way and Dixon about an incident harking back to Paulie’s father’s Russian gangsters connection. I wasn’t sure about the reason for the inclusion of either scenario as Paulie and Dixon had already proved their bona fides and “all around good people” cred.

The shift from sex to love was too fast for me to believe for either person. Growing interest – I could believe. The possibility of something more than just hawt times – absolutely but a marriage proposal seemed too fast.

Parts of this one were really fun and funny. I was tense with anticipation down the wire to see who would actually win the race after arriving in Paris first. But the relationship aspects – beyond the non-stop sexing – didn’t work for me. B-/C+