Your book first came to my attention when you posted the cover on your blog.   I am not a huge fan of the man titty but even I, a scoffer, could not help but be impressed with the rendering on this cover.   This guy exudes hotness like a furnace at a coal refinery. I looked forward to this book with some trepidation.   I haven’t loved everything you wrote in the past and I’ve read some really bad sports books.   The cover and my past experiences were creating warring expectations.   Fortunately, I enjoyed the book immensely.   The three things I liked were the portrayal of Mick as an athlete, the likeability of Tara, and the believability of their romantic conflict. 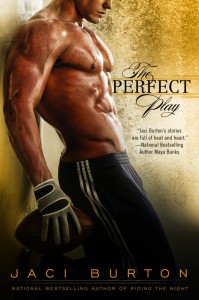 I know that this is a trade book (and Agency priced no less) and thus pricey for a lot of readers. I’m going to try to spell out why I liked this book so the reader can take measure for herself.   I think what will be the deciding factor in whether this book works for the reader is the reader’s response to the prose.   The prose in the book is fairly ordinary.   Lyrical metaphors won’t be found here. The writing is pretty plain.   I suggest reading an excerpt to decide whether the writing works.    For me, however, the writing worked just fine because Mick, as a superstar athlete, and Tara, the party planner raising a teen boy, and their romantic conflict read as authentic and believable and, yes, as hot as the cover suggests.

Tara is a party planner with a 14 (soon to be 15) year old son.   She made a lot of mistakes as a kid and had crappy parents but is trying to give her son the best possible life.   She doesn’t date.   It’s not that she isn’t interested in men but rather building a business and taking care of her son takes all of her time.   She meets pro quarterback Mick Riley at a party she planned.   Mick propositions her and Tara decides to let her hair down.   This very hot, famous, successful guy is offering her a night of pure pleasure?   She’ll take it and be home before the sun is up.

When Mick, however, is intrigued by Tara who clearly isn’t dazzled by his superstar status.   Plus, their night together was as good as he has ever had so he tries to engage Tara in a more steady relationship but   Tara keeps turning him down.   She isn’t really interested in his lifestyle and she is sure he doesn’t want to date a woman with a kid.   Tara’s dedication to her son and her business and refusal to be swept away by Mick’s platitudes were admirable and believable.   She really wasn’t interested but, realistically, she felt that whatever Mick had in mind for her wasn’t of any permanence and she wasn’t going to expose herself and her son to that kind of trouble.

The portrayal of Mick as this handsome and successful athlete who had the world by the tail was very believable.   Mick wasn’t an asshole, but he was in a position where everything in life came easy to him.   He didn’t need to pursue women. He had a ton of money.   His life was very, very good even if he had stumbled a few times on his way to the top.   In pursuing his on the field success with single minded intensity, he let others, particularly, his agent take control of his off the field life.

In order to justify why Mick was interested in Tara over the past supermodels and actresses he had dated, we were treated to a number of comparisons by Mick between Tara and his past flings.   He was always referencing how real she was versus how fake the other women were. I appreciated that Mick made passing acknowledgments that maybe he had been looking in the wrong places but even in bed, his references to how much more awesome she was than others in the sex department became tiring.

Another thing is that I wished that some of the later sex scenes would have reflected a deeper emotional connection between the two. I noticed it most in the language that the two of them used with each other.   In the beginning, Tara and Mick both use the phrase “fuck” to reference having sex , but later in the book, after the two were in a relationship and there were some heavy secrets being unloaded, I would have thought their language toward each other in the love scenes would have been a bit more tender as well as the sex itself be expressed differently.   While the sex scenes were hot, I didn’t feel that the emotional tenor changed enough to reflect the changing emotions in the couple.

Mick’s pursuit of Tara reflected his proactive and physical method of dealing with things. Faced with an obstacle, Mick moved forward until said obstacle was overcome. Tara’s resistance was simply an obstacle, or so Mick believes.   But Tara isn’t an obstacle. She’s a human with real emotions whose devotion to her son and desire for a certain kind of life for the two of them didn’t fit into Mick’s more obvious lifestyle.

Mick’s interaction with Tara’s kid was well done and I loved Mick’s family.   There is one scene toward the end where Mick has it out with someone who is trying to mess with Tara and Mick’s relationship and it was one of the strongest emotional scenes in the book for me.   I re-read that scene again. Mick’s anger, his fear of losing Tara, and his strong desire to be Tara and Nick’s family really sang.   For fans of sports books, I think that this book delivers. B-