REVIEW: The Other Guy’s Bride by Connie Brockway

When I found out the news that this story is about Harry and Dizzy’s daughter, I was initially excited. Until I sat and thought for a minute and realized that it’s been so long since I read “As You Desire” that I have absolutely no recollection of it and its two principals at all. With that in mind, when I sat down to read “The Other Guy’s Bride,” I did it as if it’s a stand alone book about a bunch of people I’ve never encountered before which turned out to work just fine. 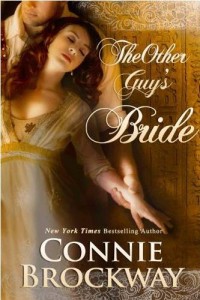 Ginesse Braxton is the eldest child and – so far – only daughter of famed Egyptologists. She’s been raised around the subject and in Egypt for most of her life and feels the burden of “proving herself” in a famous family. She also seems to attract trouble where ever she goes and whatever she does to the point that her exasperated parents finally sent her back to England where she’s finished a degree in ancient history at Cambridge. It’s while studying some ancient texts there that she came across clues that might lead her to the ancient lost city of Zerzura. This! she feels might be her redemption and chance to establish herself in the field of Egyptology – if only she can work out how to get there.

Taking her fate in her own hands, she sets off for Egypt where she meets a fellow passenger with a spectacular case of mal de mer who is traveling to Egypt to marry a British Army officer stationed at an outpost not far from where Ginesse feels her lost city might be found. The officer, Colonel Lord Pomfrey, is to send a troupe of soldiers, lead by a man he describes as a scoundrel, to escort his betrothed after she arrives in Cairo. But poor Mildred can’t take another minute of sea travel and in this, Ginesse sees her chance. Talking the young woman into disembarking and taking the long scenic route to Egypt by train – and I’m thinking it’s going to be a long trip from Italy around the Mediterranean to Egypt – Ginesse travels on under Mildred’s name where she meets Jim Owens who has been charged to bring Mildred to her fiance.

Jim is the scoundrel Pomfrey describes him as but he’s got quite a backstory which includes being indebted to Pomfrey which is something Jim is desperate to escape from. Doing travel duty across barren desert seems like a relatively easy way to pay it off until Jim starts to get to know his charge. She’s intelligent, willful, resourceful, can get into a scrape in the blink of an eye and seems to know a hell of a lot about a country she’s never set foot in. She’s also the most – to him – attractive woman he’s ever met and as the journey proceeds through various and assorted issues and problems, he’s finding that delivering another man’s bride might end up being the hardest thing he’s ever tried to do.

Before I really get started talking about the book, I have to get some name issues off my chest. Ginesse. At first glance I debated, “Hard G? Soft G? Hard G or soft G? How the hell do I mentally pronounce this? Finally I resolved on soft G because I didn’t want to think of drinking in an Irish pub the whole time I was reading the book. Then there are two secondary characters Magi and her nephew Haji. Sorry but the two names together sound like a comedy team. But I digress.

The first part of the book is interesting. I like the character set ups and watching Ginesse manage things to her own satisfaction. She’s supposed to be intelligent and she acts that way. She’s supposed to be inquisitive and imaginative and, again, that’s how she acts and what she does. Watching her overcome the obstacles in her path is fun. Jim isn’t really so much of a scoundrel as he is a man who’s had a tough road in life but who has fought to maintain his sense of self, to live life on his own terms and not be trapped by the circumstances of it. He has a deep sense of honor about this debt he owes Pomfrey and as Ginesse gets into various predicaments, I can almost see him grinding his teeth as he’ keeps on keeping on’ to get her where she’s supposed to go and off his hands.

But then comes the lusting. Lots of lusting. On into the desert and more lusting which then changes to standard “No, no we can’t do this. Wait, let me tilt my head so you can kiss my neck better. ” During this section I lost the feel for the Edwardian Egypt setting and felt I was trapped in any number of historical romance books I’ve read before.

Just as I was wondering if we’d ever get back to some interesting action, Ginesse and Jim are stupid with lust and let danger sneak up on them. Idiots. Now comes some good stuff with the Tuaregs and then! the rescue – which is sort of anticlimactic but okay if you want to downplay that I’ll go along. That is until the supremely stupid consummation scene. Yeah, he’s been worried and she’s been worried, for days, about what’s happening and going to happen but even with the slavers momentarily – momentarily! mind you – out of the picture that is NOT the time to give into their lust. And what happens then is more silly standard romance nonsense on Ginesse’s part – he didn’t say he loves me so I will deny my own love, turn him down and potentially face all the ruination that Jim has so thoughtfully laid out. WTF? I am so tired of this ” I won’t settle for 70 % if I think there’s 100% out there” romance heroine logic. He’s sure as hell not going to ever fall for you if you push him away and out of your life, is he? Sigh…

These push/pull interactions continue as everyone who needs to be there ends up at the army outpost then the mystery of the lost city of sorta solved, and along the way Ginesse discovers what is and really isn’t important to her about Egyptology. Now that is one part I feel is well done since the end of the book requires Ginesse to switch gears about what she wants from life. Often a romance heroine will – seemingly – toss out her life’s ambition once twue lurve hits her but here clues as to how she’s really feeling versus what she’s always felt she wants are laid out well enough that I can buy her ultimate decision regarding continuing the search for Zerzura. I also really like the humor and bantering dialogue from all – well most – of the characters throughout the book. And the fact that two characters – Mildred and Professor Tynesborough – don’t turn out anything like I initially thought they would.

My dislike of the fact that Ginesse won’t accept Jim’s many proposals until he says the magic three words is countered by the wonderful proposal he tenders to her once he realizes what the issue is. That whole scene in the cave as the sandstorm rages around them is wonderful – though I did wonder how the horse was handling the shirt over his eyes for the extended period of time. The slightly overdone romantic gestures back in Cairo and the Happy Family epilogue don’t light my fire but at least Jim now knows what his lady wants and he does deliver them.

So there are elements of the book I really do like while others leave me flat or with feelings of romance ennui. I think the book stands on its own merits and if readers either haven’t read “As You Desire” or if, like me, that book is a hazy, happy memory, I feel they’ll do just fine jumping into this one. Yeah for the Edwardian/Egyptian setting and thank you for the explanations of the liberties you took with things in the story and the fact that the facts you include in it don’t come off like a history lecture. B-