REVIEW: The Nonesuch by Georgette Heyer

When an author has published over fifty books, where do you start? I want to make the case for one of Georgette Heyer’s less frequently discussed novels. It features an on-the-shelf but still attractive spinster, a paragon of a hero, a brilliantly drawn cast of supporting characters, a country setting, and sparkling dialogue. There is a satisfying romance at its core, but that romance sometimes takes a back seat to her richly depicted social world. 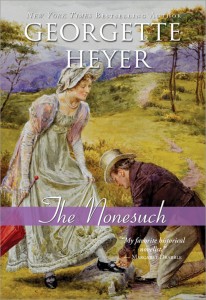 Our heroine, Miss Ancilla Trent, is a 28-year-old spinster from a good family fallen on hard times. Rather than become a burden to her male relatives, she makes a living as a governess to The Beautiful Miss Wield, an heiress from a bourgeois background who is living with her somewhat vulgar but loving aunt and cousin, who in turn are part of rural gentry society in Yorkshire. Into this pastoral landscape ride Sir Waldo Hawkridge and his young relative, Lord Linden. The arrival of these London sophisticates throws almost everyone into paroxysms of excitement: the young ladies want to marry them, the young men want to be them, and the matrons compete to wine and dine them at social events. Miss Trent initially views Sir Waldo with skepticism, because she is all too aware of the unappealing aspects of the Corinthian lifestyle, but he breaches her defenses with charm and kindness. Sir Waldo, in turn, is intrigued by this quiet, well-bred lady who is the only unmarried woman not throwing herself at him.

Why could this book have never been written today (even apart from the barely-there level of sensuality)? Let me count the ways:

(2) Not a Duke to be found. Not only that, but Lord Linden is less of a catch than Sir Waldo. This clearly violates every tenet of today’s Regency canon.

(3) No spies. Not a one. And even though it’s a country setting, there are no house parties.

(4) A large cast of characters but no sequel bait. The multiple storylines are all resolved, explicitly or implicitly, by the end of the novel.

Heyer’s biographer, Jane Aiken Hodge, is somewhat disparaging of The Nonesuch, noting that it “showed signs of strains” and quotes Heyer as telling her friend and publisher, “I think it stinks.” But while the external conflict that keeps our hero and heroine apart toward the end is frankly unbelievable, there is much to enjoy here.

The characters are sharply drawn, but they are not mere caricatures. Although Tiffany Wield is ambitious, vulgar, and self-absorbed, Heyer lets us see her charm as well:

She stared up at him incredulously. “But—don’t you think I’m beautiful?”

“Well, I know I am,” she said candidly. “Ancilla thinks I shouldn’t say so—and I meant not to, on account of losing some of my beauty when I do. At least, that’s what Ancilla said, but I don’t see how it could be so, do you?”

“No, indeed: quite absurd! You do very right to mention the matter.”

She thought this over, darkly suspicious, and finally demanded: “Why?”

“People are so unobservant!” he answered in dulcet accents.

She broke into a trill of delicious laughter. “Oh, abominable! You are the horridest creature! I’ll have no more to do with you!”

He waved a careless farewell as she flitted away, but he thought privately that when she forgot her affectations, and laughed out suddenly, acknowledging a hit, she was disastrously engaging.

For readers who enjoy context and setting, this novel has a lot to offer. There isn’t much in the way of plot: Ancilla and Sir Waldo slowly fall in love; Linden’s initial adoration of Tiffany dissipates and he moves on to a deep, long-lasting love for a more appropriate object of his affection; and Tiffany eventually gets her comeuppance, in a way that engenders some sympathy from the reader. The vignettes of country life, and the trivial but genuine pleasures of gentry life are fun to read as they advance the characterizations and plot. For readers accustomed to bed-hopping, house parties, and Almack’s, the pursuits of Yorkshire society may seem quaint, but they feel authentic, and they ring the changes as the novel progresses. For example, the excursion to the Dripping Well first reveals Tiffany’s unattractive qualities to the besotted Lord Linden:

“Miss Colebatch, don’t come out into the sun!” interposed Miss Trent, taking her hand. “I am going to ask the landlady to make some tea for us, so come and sit down again!”

“Yes, some tea will refresh you,” agreed Tiffany. “You’ll be as right as a trivet then!”

“But you’re not going to ride, Miss Colebatch,” said Julian. “Underhill is to fetch a carriage for you, and we are none of us going to Knaresborough. It’s far too hot!”

“Yes, that’s right, Lizzie,” corroborated Courtenay. “I’m just off—and I’ll tell you what! I’ll get an umbrella to shield you from the sun, even if I have to steal one! So just you stay quietly in the taproom with Miss Trent until I return! I shan’t be gone much above an hour, I hope.”

“An hour?” exclaimed Tiffany. “And what am I to do, pray? Do you imagine I’m going to sit in that odious, stuffy taproom for a whole hour? I won’t!”

“Oh, so it’s odious and stuffy now, is it?” said Courtenay. “I thought you said you wouldn’t care a rush if you were obliged to spend the rest of the day in it? Yes, you can look daggers at me if you choose, but I know what you are, and that’s a selfish little cat! You never did care a button for anyone but yourself, and it’s my belief you never will!”

Tiffany burst into tears; and Miss Colebatch, sympathetic tears starting to her own eyes, cried: “Oh, Courtenay, no! You mustn’t—It is all my fault for being so stupid! Oh, Tiffany, I beg your pardon!”

“You beg her pardon?” ejaculated Courtenay.

Tiffany almost takes over the novel, but Ancilla and Sir Waldo hold their own, and their humorous and witty repartee is a pleasure to read. We see them fall in love and we can understand why Ancilla would appeal to Sir Waldo when he has been impervious to more beautiful and eligible prospects. And while it’s even easier to perceive why Ancilla would let her guard down for Sir Waldo, watching it happen is rewarding.

In the end, all ends happily. Tiffany is poised to go to London to catch her Marquis, Sir Waldo’s feckless young relative Laurie looks set to embark upon a career as a horse-dealer, and the older and younger couples are well on their way to their HEAs. The Nonesuch is not one of Heyer’s most memorable novels, but it still illustrates what made her such a compulsively readable author, and it showcases her skill with context and minor characters.