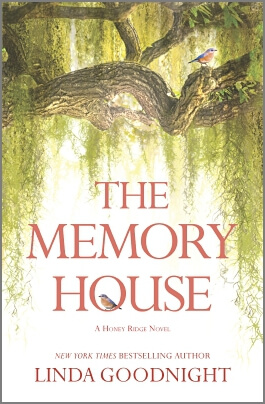 Memories of motherhood and marriage are fresh for Julia Presley—though tragedy took away both years ago. Finding comfort in the routine of running the Peach Orchard Inn, she lets the historic, mysterious place fill the voids of love and family. No more pleasure of a man’s gentle kiss. No more joy in hearing a child call her Mommy. Life is calm, unchanging…until a stranger with a young boy and soul-deep secrets shows up in her Tennessee town and disrupts the loneliness of her world.

Julia suspects there’s more to Eli Donovan’s past than his motherless son, Alex. There’s a reason he’s chasing redemption and bent on earning it with a new beginning in Honey Ridge. Offering the guarded man work renovating the inn, she glimpses someone who—like her—has a heart in need of restoration. But with the chance discovery of a dusty stack of love letters buried within the lining of an old trunk, the long-dead ghosts of a Civil War romance envelop Julia and Eli, connecting them to the inn’s violent history and challenging them both to risk facing yesterday’s darkness for a future bright with hope and healing.

From the opening pages, I knew this was going to be a book with powerful emotions and dark past issues. Everything is definitely not peachy keen and easy in this book. Readers should be aware that there are several possible trigger events including prison, child abduction, the death of a child and race relations in the American Civil War. 19th century heroine Charlotte feels uncomfortable with her husband’s slaves – she speaks of them as servants but nice as this may sound, it’s still whitewashing the actual situation. And with few exceptions, this is a book more about the whites than the slaves though one is made to pay a terrible price. The British heroine does make it a bit more possible to sympathize with her trying to keep the farm running whereas an American heroine would make this problematic.

Julia was living in limbo, determined to keep believing that her son is alive years after she last saw him. The stress his abduction caused in her marriage made it fracture then break. Buying and renovating the old Tennessee farm house into a B&B with her sister is what finally dragged Julia back into day to day life. Money issues are what makes her decide to give mystery man Eli a chance while the need to mother another hurting son is why she allows Eli to bring his motherless child there. Her reactions to Alex playing like a normal boy mystify Eli until he learns her horrible heartbreak.

I can understand Julia’s need to speak of her son and the way other people don’t want to talk about him for fear of setting her depression off. The breakup of her marriage also makes sense. I really got a feel for how much this ripped her life apart then as well as now. I think that Eli’s willingness to ask her about Mikey meant so much to her. She awakens emotionally as well as her hormones perking up around Eli. Yet, I didn’t get the feeling that she was (even unintentionally) using Alex as a surrogate. I totally understand the slight paranormal aspect with the marbles and ghostly Ben appearing to Alex. I have a friend who knows her dead child visits her when she sees butterflies. She knows what she knows.

Even if Julia has no doubts or inklings of problems, others in her life are watching Eli – not condemning merely watching. There are so many ways Eli’s past could be discovered at just the time when the plot needs it. The first surprise is that the secret is revealed earlier than I expected. The second surprise is that so many people are willing to give Eli a break rather then immediately think the worst.

Eli’s past issues – the wildness, the drug abuse – all seem natural given the death of his sister when he was young. I have a friend whose son this happened to and it’s textbook. Now we add Alex’s grief issues and the situation intensifies. Eli has reason to be worried about how Alex is handling the changes in his young life. Eli’s cluelessness with a child is understandable. His efforts to win Alex’s trust and love are tireless however. Unfortunately, Eli is in a position to know the pain of loss that Alex is facing. Alex is not a standard issue moppet. He has pain, anger, fright and loneliness and reads as a complete character.

What about Eli’s parole officer? Would Eli have been able to move to another town like this with just phone check-ins? I highly doubt it but for the whole plot to work, it must be so. Points to him for using his business degree in helping Julia’s B&B.

Eli’s time in prison has changed him severely. He’s not only lost his hope for good things in life but is mentally beaten down when the book starts. He doesn’t challenge, skitters away from people, looks twice at offers and situations that most people wouldn’t question. But slowly he gains more confidence, is willing to risk his freedom to right wrongs and reach out. He blossoms just as much as Julia.

More time is spent in the present day and I would liked to have had more in 1865. Charlotte’s reaction when the Union troops appeared is probably what saved her home from complete ruin and deprivation. She saw them as battle injured people and acted accordingly with charity to those whose need was immense. She worked tirelessly and with compassion – but then she is the daughter of a minister. The horror of Charlotte falling in love with the wrong man is that it doesn’t just affect her – another is made to pay dearly. The heartbreaking event that follows then is a horrendous wound, an aching reminder of the powers a husband and a slave owner were allowed. Edgar is the evil to balance Charlotte and the others.

This is a story of painful emotions, loss, grief, love and redemption. It’s loaded with angst but it’s quiet, smoldering angst not in-your-face, slap you upside the head angst. There are happy endings for many, but not all, of the characters. I was surprised that the book ends with two boys still missing but I guess that’s to add the the dual time frame parallels. I found a lot of the actions, feelings and emotions of these people to be true to life and what I’ve been told real life people experience – as painful as those are. Yet the end is uplifting and hopeful enough to reward me after all that anguish. Even the paranormal aspect works for me and that’s saying something. B-

→ Jayne
Previous article: GUEST POST: Top 5 Influences for An Ember in the Ashes by Sabaa Tahir
Next Post: The Complacency of Myth: Why Mac owners must be vigilant