REVIEW: The Martian by Andy Weir 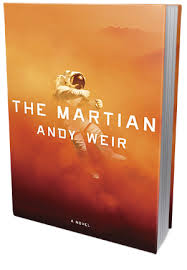 I picked up your first novel, The Martian, because some of my friends had read and recommended it. It sounded geeky enough to please my engineer husband, so I suggested to him that we read it together.

The novel begins on the sixth sol, or Martian day, of a mission to Mars. Six astronauts who came to Mars to conduct a month-long scientific survey are informed of an impending storm. The storm arrives fast, and just as they are preparing to abort the mission at NASA’s command and take their MAV (Mars ascent vehicle) back to their ship, one astronaut, Mark Watney, is struck in the chest with the antenna of their communications dish.

Mark passes out, and because the biomonitor part of his suit was breached by the antenna, his crewmembers, unable to find him in the dust storm, believe he is dead and that they have no choice but to leave his body behind.

When Mark comes to he realizes he is both lucky and unlucky.

Lucky because his blood created a seal around antenna breach that kept oxygen from leaking out, and he manages to fix the suit and get to the NASA Hab (habitat) inside which he can survive.

Unlucky because he is alone on Mars, the communications dish is destroyed and NASA does not know he’s alive. Now he must figure out a way to communicate with earth and survive the four years until the next earth mission arrives in Mars’ environment which is hostile to all life.

After a single day of panic, Mark begins to think about how to solve these problems. He is aided by the food supplies that were meant to last six people twenty four more days. He is aided by his scientific education and by the tools and materials at his disposal. Most of all he is aided by his own ingenuity and his ability to keep a level head.

The book’s high concept could be described as Apollo 13 meets Robinson Crusoe with liberal amounts of MacGyver sprinkled in.

I don’t want to spoil the details of how Mark fights to survive or the setbacks he encounters, but they involve a lot of technical and scientific stuff that checks out as far as I can tell. At times the book felt like a fun refresher course in chemistry and electronics, bringing back my high school education. It was never dull because Mark’s situation was dire and his life depended on his ability to improvise solutions to the problems that cropped up during his stay on the red planet.

At its core, The Martian is about the triumph of Mark’s spirit over a situation that was almost impossible to survive, and thus it manages to be both a man-against-nature story and a feel-good story, no easy feat.

This is also the kind of science fiction that is accessible even to people who only read SF on rare occasion. There are no aliens or ray guns, no faster than light travel or hyperspace. The story takes place in the near and all too easily imaginable future.

It was an exciting read. I cheered for Mark every time he surmounted a seemingly insurmountable obstacle, something that happened more than once. It’s impossible not to root for him because he faces such impossible odds and yet he stubbornly clings to life.

He is also good-natured, and doesn’t blame either NASA or his crew for his horrible circumstances. He does not dwell much on his past or on who might be missing him, focusing instead on the here and now and what he must do to survive. While he has one or two moments of “Fuck this fucking planet,” he lets himself vent and then gets back to work.

The focus on the here and now serves to keep the book about Mark’s struggle for survival in the story’s present, and also to make Mark into an everyman, a character easy for readers from a variety of backgrounds to identify with.

One of Mark’s personality traits is his snarky sense of humor, and while it only gave this reader a chuckle on rare occasion, it was clear that it helped Mark keep his spirits up for all that he had to face.

The story is far-fetched because even with all his skills and hard work, Mark is also very, very lucky not to have more disastrous setbacks than the ones he encounters.

My husband pointed out some plot devices to me—it seems unlikely that NASA would want the crew to take off during a storm, or that the crew wouldn’t leave more working cameras behind to capture images for NASA. He also felt that NASA would have had enough sense to make the Hab modular.

A bigger issue was the writing. Mark is an astronaut, so I didn’t expect elegant prose from his log entries. But the whole book was written in a similar style, and the dialogue especially included some clunky lines, with multiple characters sharing similar verbal ticks. (Many of them were fond of saying “Mmm” for example).

Additionally, many of the characters shared a certain immaturity which may be believable in a few but seemed too widespread. The office politics at NASA were not that convincing, for example.

The denouement had believability issues, too.

In resolving the dark moment, side characters displayed the same kind of quick scientific thinking and improvisation that Mark had employed throughout the book. While I could believe this aspect of Mark’s personality, ingenious as it was, when others showed similar brilliance in this arena, it became harder to suspend disbelief.

A quick decision made by those characters without discussion in that same part of the book also defied believability.

The Martian is not a masterpiece of characterization or word smithing, but it has some terrifically entertaining storytelling, a very heroic hero, and it makes science fun. C+/B-

→ Janine
Previous article: REVIEW: True Pretenses by Rose Lerner
Next Post: Daily Deals: Box sets so you can get more bang for the buck