REVIEW: The Lovers by Eden Bradley 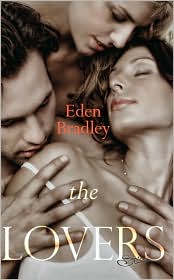 Some months ago I heard that you were writing a ménage romance for Harlequin Spice.   Although I don't read much m/m/f, I die for f/fm and have trouble finding it.   A full-length book in which two women and a man have a sexual relationship is unheard of in mainstream romance.   To say that I eagerly anticipated The Lovers is an understatement.   Brava to you for writing it, and to Harlequin for publishing it.   Squee!!

Before I get into the actual review, I suppose I should disclose our publishing connections.   I write for Harlequin/Silhouette (not Spice).   We also used to have the same editor at Bantam Dell.   I don't think this has any bearing on my review, but it seems appropriate to share.   There are times when I've felt uncomfortable writing a negative review for personal or professional reasons.   I probably would have declined to review The Lovers if I'd hated it.

Luckily, I didn't hate it.   I didn't love it, either.   Perhaps because of my giddy anticipation, I was delighted and disappointed in equal measures.

The story is written in first person, present tense from Bettina's point of view.   She is an author of somber women's fiction, shy and reserved, the kind of person who feels inhibited and holds herself at a distance.   Bettina has come to Santa Barbara for a two-month retreat with a group of authors she met online.   These authors gather annually and it is Bettina's first time joining them.   She wants to stop living like a recluse and step out of her comfort zone.

Bettina has a strange reaction to Audrey, another author who seems like her polar opposite.   She's never been attracted to a woman before, but the winsome, free-spirited Audrey captivates her.   Audrey flirts with everyone, male and female.   Bettina falls under her spell and the two begin a torrid sexual affair.

Although The Lovers doesn't become truly compelling until Bettina takes the edge off with Audrey, the writing is lovely.   This California girl was in raptures over the descriptions of the Santa Barbara coast.   The ocean works well as metaphor for Bettina's sexual awakening, and for female sexuality, in general.

It's low tide and seaweed lies in dark, curling strands at the edge of the water, waiting to be carried back out to float on the sea.   I can smell the salt, tangy and fresh and energizing.   I can feel the power of the waves as they surge in, then out.

Audrey is impulsive, charismatic, and easily distracted.   Her ADD is a nice foil to Bettina's OCD.   While Audrey is with Bettina, she's a loving friend and a sexual dynamo.   She's not the type to settle down, but Bettina is smitten nonetheless.   The contrast between Bettina's reflective, obsessive qualities and Audrey's flighty recklessness creates tension.   We know Audrey will break Bettina's heart-‘any second now.

The sex is hot, hot, hot.   These are the most explicit f/f scenes I've ever read:

I stroke her with my fingertips, making her squirm.   Then I grab her hips and pull her lower, guiding her, and let my tongue flick over her wet, pink flesh.   She does taste like the ocean: dark and damp and a little salty.   And she is so slick under my tongue, the taste of her, her scent, her arousal making me hot, pleasure rolling over me in undulating waves.

The relationship between Audrey and Bettina is more than just physical.   Both women feel comforted and empowered by female touch.   Neither seems concerned about labels or societal norms.   I absolutely loved this positive, fluid portrayal of female sexuality.

She takes my hand and we climb into bed.   And I am thinking vaguely how different this is, being with a woman, just as she'd said.   It's softer, and perhaps I have needed this.   Because I do feel healed, somehow.   And it's not just Audrey's magic, but the femaleness of it.   Of her, of us together.

We are curled up together, naked, on top of the blue-and-white quilt.   Like a pair of kittens.   That sweet.   That innocent.   And we sleep in the gentle afternoon sunlight, the ocean soothing us, like a mother's lullaby that neither of us can remember.

Enter Jack, brilliant author of dark thrillers, Audrey's off-again, on-again boyfriend.   If Bettina was surprised by her attraction to Audrey, she's even more confused about her feelings for Jack.   When Audrey and Jack kiss, Bettina doesn't know who to be jealous of.   She wants them both.   Bettina spends the next week fantasizing about Audrey and Jack, listening at their bedroom door, obsessing over them as a couple.

Audrey tells Jack about her affair with Bettina.   He's turned on (predictably) and mentions this to Bettina when they're alone.

He smiles, all too-good looking charm, his mouth wide and soft.   He has the most incredible bone structure, his dark stubble outlining his strong jaw.   Despite myself, my confusion, my small bit of outrage, I am melting again.

"The image of you two in bed together makes a pretty picture in my mind," he says, his voice low.   "I'm sure it was even more spectacular in person."

I feel my mouth open in a small o.   I have no idea what to say to this.   The idea that he's fantasizing about Audrey and me together.   The idea that Audrey told him about us!   The still-fresh painful confusion over her leaving me in the dust for Jack.

During the encounter, which Bettina participates in with great pleasure, she realizes that Jack is the one she really wants.   This progression seems organic to the story and it keeps the tension high.   Who will get burned first?

[spoiler]After a long night of debauchery, Audrey spies a hot guy on the beach and takes off with him.   OMG what?   This is typical behavior for her, as the character is presented, but I found it so shockingly rude and cruel that I couldn't get over it.   Why anyone would put up with her is beyond my comprehension.   Worse, Jack and Bettina still want her!   Surely anyone with a modicum of pride or self-respect wouldn't subject themselves to Audrey's casual disregard.   Not more than once.

Jack has said all along that Audrey is no one's girlfriend, certainly not his.   He's a no-strings kind of guy.   He has good reasons for his behavior (or so he thinks), but I was bothered by his inability to commit.   He has this misguided idea that he's saving his lovers from disappointment by refusing to make promises.   Perhaps because Audrey was so fickle, I wanted to believe Jack could be faithful.   Or maybe his womanizing took away from the girl-power themes of the story.   I don't know.

Right after Audrey ditches them, Jack asks Bettina how she feels.   When she acts surprised by his concern, he remarks that she is "bitter about men."   Jack shows a lack of self-awareness here.   First of all, he's incredibly bitter about Audrey, despite their open relationship agreement.   He's also left many bitter women in his wake.   Damn you, Jack!

Audrey is the catalyst to Jack and Bettina's sexual relationship, and she continues to overshadow them as a couple.   When they go straight to bed, it seems like a reaction to Audrey's betrayal rather than a manifestation of their innermost desires.   Later, Jack and Bettina watch Audrey have sex with her new lover, both becoming aroused by the sight.   I wondered more than once if this book would delve into foursome territory.   The focus on sex-‘and Audrey-‘took away from Jack and Bettina's tenuous emotional connection.

Bettina falls hard for Jack, but he's still hung up on Audrey, and too set in his bachelor ways.   He's angry, and caustic, and hurt.   Bettina is obsessive, and pensive, and melancholy.   Again, her routine seems unhealthy and repetitive.   She sleeps with Jack, he warns her not to get attached, and she agonizes over her feelings.

I didn't want or expect Bettina to wind up with Audrey, but lowering my estimation of her did not heighten my estimation of Jack.   Bettina calls Jack out on his bullshit a few times, but she holds back more often.   Audrey has the most influence over him.   She brings Bettina to Jack, breaks his heart, and makes a series of sleazy moves that force his capitulation.   Does Jack deserve Bettina?   Does Audrey deserve a push off the Santa Barbara cliffs?   I can't decide.
[/spoiler]

In the end, Bettina has grown from her experiences.   She came to the writers' retreat to broaden her horizons, take emotional risks, and connect with people.   Mission accomplished.   She finds love, and (more importantly, perhaps) finds herself.

As I read over this review, I realize I had quite a bit to say, so cheers for writing a thought-provoking story.   The Lovers is a special book and I was moved by it.   The characters are deeply flawed, sometimes unsympathetic, and their relationship is a work in progress.   B-