I am baffled why such a good book has such a stupid title. Really, I am. When I first saw your book The Legendary Playboy Surgeon I snorted.  The cover is awful–some dark-haired dude wearing oversized aviators is going for sexy and coming across surly–and the series description, “Heartbreakers of St. Patrick’s Hospital. The delicious doctors you know you shouldn’t fall for!“sounds like an atrocious reality TV show. I was sure, as someone who has worked in  hospitals and  is married to a not-playboy surgeon, I’d read your book and mock and jeer at the incorrectly rendered medical world and shallow portrayals of dick-obsessed doctors. I was wrong. The Legendary Playboy Surgeon not only is spot-on in its portrayal of a working hospital, but its hero, Dr. Connor Matthews, is a compassionate physician who reminds me of surgeons I’ve known–the good ones whose patients are beyond grateful to have them as their caretakers. 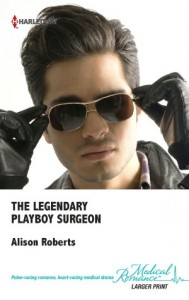 A running joke in medicine is that surgeons know nothing and do everything, internists know everything and do nothing, and pathologists know everything and do everything but it’s always too late. There are no internists in this tale, but there’s a do everything while breaking the rules orthopedic surgeon and a conscientious do and know everything pathologist. Connor, the surgeon, is a playboy in that he’s dated a string of babelicious blonde nurses at his hospital, but, really, he’s always been an honest, generous lover and he’s never lied to get into anyone’s scrubs. All of his ex-conquests think he’s a good guy and kinda envy who’s ever currently warming in his bed. He’s dedicated to his patients, savvy about hospital politics, and more or less an emotional loner. Kate, the pathologist, does both regular pathology and autopsy work. She’s driven, determined to correctly diagnose not only the cause of death in her cadavers, but the exact pathogen sent by the OR to her diagnostic lab. She’s also a survivor of childhood abuse; she copes with her past by keeping her distance from men and by walling off any strong emotional responses.

I did find the opening scene in the book a bit much. Connor, wanting to make the day of a dying little boy, actually rides his motorcycle into the kids’ ward. (I kept thinking about all the filtrating oxygen masks being besieged by noxious particulate matter.) Kate can not believe he’s done such a rule-breaking, possibly dangerous thing. Connor, wearing black leathers, tells Kate not only is she way too uptight, her tightly buttoned up lab coat looks stupid, and she seriously needs to get a life. But, once I got past the unlikeliness of even a hot-shot surgeon being able to ride a chopper into a ward, I liked Connor, Kate, and their relationship.

Kate, in particular, is a moving character. She was raised in an abusive home, and, like many a survivor of childhood chaos, is most comfortable when she is in complete control. She’s 34, lives alone, and has never let her guard down with a man–even when she’s had sex, she’s always distanced herself from the experience. She can’t stand what she knows of Connor–he’s a rule-breaker, the kind of guy who charms his way past regulations, and he seems to sleep around. (Kate doesn’t do casual sex.) When she confronts him about the inappropriateness of his stunt with his bike, she’s shocked to realize his motivation wasn’t to look hot in front of the nursing staff, but rather to grant a child’s last wish.  When he then lashes out at her personal life, she’s at first angry and then, much to her chagrin, focused on whether or not he’s right.

Connor, a nice guy, is appalled he was flat out mean to Kate. He has always thought of her as Princess Prim and Proper from Pathology but he knows she’s a good physician and a dedicated caregiver. She certainly didn’t deserve him dumping all over her. Over the next few days, Connor keeps revisiting their confrontation in his mind. She’s not his type–in fact there’s a new nurse on his service, a bubbly blonde named Bella who has his name written all over her come-thither smiles–but he can’t stop thinking about Kate. She’s so tightly locked down–Connor wonders what Kate would be like if she let down her hair and defenses.  One afternoon in the OR, Bella injures her foot and Connor, who is considering sampling her charms, offers her a ride home on his bike. He is stunned to deliver Bella to Kate’s house–Kate, though less than a decade older than Bella, is her aunt. Connor takes one look at Kate when she does indeed have her hair down and is oddly entranced.

The relationship between Connor and Kate develops slowly. They work together on developing a mini pathology lab for the OR and become friends. Kate struggles with her fear of intimacy; Connor is content to let her find her way to him even as he’s not sure what sort of relationship he wants. I usually like my romances to have more spice than this one does, but the lack of lusting and fevered passion suits this story.

There’s much in this book to enjoy–Connor and Kate have interesting pasts, especially Kate. Her relationships with Bella, Bella’s father–Kate’s brother–, and her own father are complicated and, at times, surprising. There’s a suspenseful subplot around the diagnosis and treatment of one of Connor’s patients. Connor and Kate both think a great deal about their work and their musings on modern medicine are thoughtful and thought-provoking. The prose is clear and unflowery; the setting, modern New Zealand, easy to visualize. The Legendary Playboy Surgeon is nicely done and deserves a much less eye-roll inducing title.

The only thing I disliked about the book was the speed of its resolution. The first 90% of the book is well-paced–I especially liked the way facts about Kate’s and Connor’s backgrounds were parsed out. The last 10% passes in a blur and Kate and Connor find their happily ever after far too quickly. Furthermore, so much has been made about Kate’s inability to let go sexually–she’s always been a big faker–, it’s disappointing to have her first joyful physical encounter summed up in a few cursory sentences.

So, awful title, pretty good book. I’d willingly read another in the series–I’d bet the next story is about Bella whom I liked. I give The Legendary Playboy Surgeon a B-.