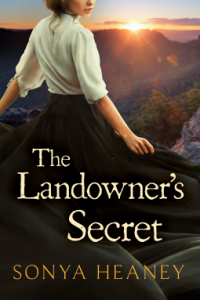 When Alice Ryan wakes to find thugs surrounding her cottage, on the hunt for her no-good brother, she escapes into the surrounding bush.

It is wealthy landowner Robert Farrer who finds her the next morning, dishevelled, injured, and utterly unwilling to share what she knows. With criminals on the loose and rumours that reckless bushrangers have returned to the area, Robert is determined to keep Alice out of danger, and insists on taking her into his home-despite the scandal it may cause. Convincing her to stay on with him for her own safety, however, is going to take some work.

What Robert doesn’t expect is his growing attraction to the forthright, unruly woman staying in his home. Before either of them can settle into their odd new situation, their home and well being come under threat and they will need to trust each other to survive. But they are both keeping secrets, secrets that have the potential to ruin their burgeoning love, their livelihood … and their lives.

Confession time, I’ve recently started watching the reality TV series “Outback Truckers” on Netflix. I think our Aussie reviewer Kaetrin secretly despairs of me. So with Australia on my mind, the first part of this blurb jumped out at me. Alice is tough, hardy, and not someone to mess with. Alice could easily handle driving a road train. By the end of the book, I almost felt a teensy bit sorry for the bushrangers.

The opening scene sets the stage for the kind of danger lurking around Alice’s life due to her feckless brother and gives a solid reason why she needs to stay at the nearby wealthy sheep station of Endmoor. Alice’s life has been hard but she’s managed to eek out an existence. Still she can’t help but notice how much easier everything is at Endmoor. After being found out in the bush, shivering with a possible fever and having been bit by something (the doctor thinks spider as the usual snake suspects would probably have killed Alice by morning), Alice gets put on a bed softer than she knew existed, treated by a doctor who comes straight out to see her, and generally fussed over.

Still worry over her brother drives her to eventually attempt to sneak out of the luxurious house back to her own little shack. She doesn’t get far but is seen by the local Big Man Around Town who likes to manipulate people. The person he wants to mess with now is Robert and Tom Wright can make Robert’s dream of beginning a vineyard blow away before it’s even begun. So when people stop returning Robert’s telegrams and letters, he knows he’ll have to propose to Alice to quell the rumors that he’s keeping her as a mistress. Yeah, people must not be thinking of the spider bite.

Surprisingly Alice doesn’t leap at the offer. She’s not averse to living a better style of life and has no sweetheart she’s losing but she has Robert spell out that he realizes the social inequalities and yes, really wants to marry her before she agrees. Alice is practical and for the most part, I loved her. Once she and Robert marry, Alice neatly deals with those who can’t quite manage to adjust their viewpoint of a woman from a shack marrying so far up. Her new sister-in-law approves of how Alice keeps her head high and almost dares anyone to look down on her. So does Robert.

Robert is almost too good to be true for most of the story. He’s good looking, educated, hard working, concerned about Alice and her reputation, and pretty good at the bed stuff that Alice learns about “on the job.” It’s not until late in the book that Robert is given some toes of clay and frankly, this subplot felt tacked on just for that purpose alone. I wish Robert had had a bit more fire in him but maybe once the vineyard gets going (hopefully in book two) he will. The bushranger threat hanging over Endmoor also gets elbowed to the background for a good part of the book and wrapped up fairly quickly.

Though the romance is sweet and ends well, Alice is the reason to read this book. Alice and seeing life in New South Wales in the mid 1880s when the whisper of the word “bushranger” was enough to send people anxiously scurrying for their sidearms. I learned that beds must be checked nightly for spiders (there’s one in Australia with fangs that will puncture toe nails!), that flocks of cockatoos are noisy, and if you go out in the bush, stomp.along to scare off snakes. Alice is feisty and determined. She’s smart and takes advantage of Robert’s library. If well brought up young Australian women can learn to use fancy words, well then Alice can, too. She’s proud but not (too) stupid about it – with one exception but she rescues herself. I liked Alice and hope to see more of her in the next book. B-