It’s always exciting to read a debut book by a fellow blogger, although it can be a bit daunting, too. What if I don’t like it? Will that affect the way I read your blog? Fortunately, I enjoyed The Lady’s Secret, a book that mixes old and new genre conventions in interesting ways. In one sense it reads like a love letter to many older trad Regencies, but with a progressive streak that updates and adds new dimension to vintage tropes like the cross-dressing heroine and her brother who is trying to prove his legitimate claim to an earldom. 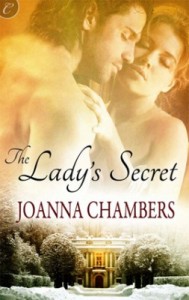 While her brother Harry travels the English countryside, looking for written evidence of their parents’ marriage, Georgiana Knight works at the Camelot Theatre in London, where she makes sets and costumes, her promising acting career cut short by crippling stage fright. Georgy and Harry inherited their actress mother’s share in the theatre, but Georgy still works hard, in part because Harry is using a good portion of their savings trying to confirm their parents’ marriage and, ultimately, his claim as the legitimate Earl of Dunsmore. Their parents married in secret after their father was told he’d be disinherited if he married an actress. After his death, their mother was paid off to keep quiet about the marriage, and her suspicious death has left Harry and Georgy financially stable but technically illegitimate. And while Harry is optimistic that he can find evidence of the marriage, Georgy has another plan: get into the current (i.e. illegitimate) Earl of Dunsmore’s house and search for evidence there.

Finding a way inside one of Dunsmore’s homes is easier said than done. However, a position becomes available in the Earl of Harland’s household, which would give Georgy the opportunity to visit Dunsmore’s house with Harland’s other servants for Dunsmore’s holiday house party. The problem is that it’s a position as valet to the earl himself, which would require Georgy to function in a state of daily intimacy with the man she is trying to fool into believing she is both a male and an experienced valet. Still, the temptation of being able to search Dunsmore’s house for evidence is immensely appealing.

It is a foregone conclusion that George Fellowes will get the job; the real challenge is in putting her considerable acting skills and somewhat androgynous appearance to use in close quarters with other servants and a “beautiful” man who makes her “ache.” Where Georgy is slight and almost boyish in appearance, Nathan has “lushly, extravagantly lashed” eyes and a mouth that “might have been thought almost feminine in its beauty, were it not for the firm, purely masculine line of the jaw beneath.” Where Georgy is spare in speech and manners, Nathan is elaborate and highly decorated, and elegant dandy who nonetheless thrives under Georgy’s unassuming but highly attentive maintenance.

For me, the first half of the book is the most interesting, because there seems to be no rush to reveal Georgy’s secret and let the sexxoring begin. Instead, Georgy spends the first part of the book watching and learning about Nathan and his household – how he prefers to be shaved and dressed; how his cravat should be tied, how his body looks and moved as he casually displays himself in Georgy’s presence. She is attracted and intrigued, but not tempted to reveal herself. And Nathan suspects nothing amiss, even after a facial massage Georgy gives him to relieve a headache physically arouses him:

These rationalisations did nothing to relieve his horror though. He felt embarrassed and awkward. And exploitative. Especially when he remembered what had brought Fellowes to his door—a master who had tried to take advantage of Fellowes’ youth and inexperience.

But still there is no unveiling, or even suspicion on Nathan’s part, that George is other than he seems. I appreciated this, because as difficult as it often is for me to suspend my disbelief that these young women make convincing young men, it is particularly frustrating to me when the cross-dressing device is used primarily as foreplay. In The Lady’s Secret, however, Nathan and Georgy move on from the massage incident, and it is not until some time later that Georgy’s secret is revealed. And even then the relationship between them does not change. I won’t spoil the secret of how Nathan finds out, because it’s quite a delicious scene, but I will say that his discovery is probably my favorite part of the book, because instead of calling Georgy out, he decides instead to observe her:

She was like that secret drawer in Lady Dunsmore’s tea chest. Now that he knew the secret, he wanted to know how it worked too. He wanted to see her with other people and watch how she did it.

Nathan, who has a scientific bent of mind, studies her like she initially studied him, although for different purposes. And what is wonderful about this part of the book is the way their relationship beyond master and servant, but not yet friends or lovers, begins to develop, with Nathan testing and teasing Georgy, trying to understand what she’s about and enjoying his secret knowledge of her:

He levered himself off the bed and stretched his long body with languid grace while Georgy, who was trying not to look, brought a straight backed chair forward for him to sit on while she shaved him. As soon as he sat down she began to dab lather over his face, noticing that his eyes were on her own face as she did so. It was disconcerting. Usually he was inattentive, his gaze elsewhere, but today he followed all her movements, and when she finally leaned over him, brandishing a razor, he tilted his chin to stare up at her. The silence between them seemed to take on weight and charge—it became a physical thing with uncomfortable edges.

It’s not just a sexual thing, although mutual attraction is part of it. There is a real intimacy in the relationship between a man and his valet, and the way Chambers plays with the budding sexual attraction in the context of this other intimacy is very well-done – you feel the tightness of desire between the two, the uncertainty, the slipping of the masks and yet at the same time the remoteness between two individuals of such apparently different social status. The writing throughout is also quite nice, not florid but not completely spare, either.  There is some over-description and explanation of things I wish had been trimmed a bit, but overall there is a real deftness to the construction of this part of the book.

Where things break down for me is when Georgy discovers that Nathan knows her secret, and the two begin what feels like a much more conventional relationship. The snapping tension loosens and for some reason the growing emotional intimacy did not feel as powerfully wrought. Georgy’s agenda – which she does not immediately share with Nathan – keeps some distance and tension in the relationship (can she trust him?; can he trust her?), as does the social inequity between the two and Georgy’s own resistance to leading the conventional life of an earl’s mistress. That Georgy does not give up on her quest to find evidence of her parents’ marriage at Dunsmore’s home adds a good deal of plot suspense, as well, and much of the second part of the novel is taken up with the complications that arise from Georgy’s determination and Nathan’s curiosity about what she is up to. In fact, I really love a curious and scientifically minded hero, although I even felt that part of Nathan’s character weakened over the course of the book, giving way to the equally clichéd and definitely not my favorite insensitively boorish aristocrat type.

There is also a secondary relationship between two male aristocrats that intersects in interesting ways with Georgy and Nathan’s relationship. I liked that the relationship was not included for titillation or novelty; Chambers constructs several clever scenes that make a substantial contribution to the central plot and romantic relationship, and for the most part she handles the relationship with a cognizance of its necessary secrecy. However, there is a point later on in the novel where a very unlikely (and dangerous) public scene seems to contravene the previous discretion shown (and while homosexual feelings themselves were not a capital offense, in 1810, arrest for sodomy was still very much a frightening possibility). This shift wasn’t a deal breaker for me, but it did seem a bit inconsistent, given the previous handling of this relationship.  I also think it is a difficulty inherent in wanting to give two men a happy romantic outcome during a period in history when their relationship was a crime.

Ultimately, it was the gradual slipping of Nathan and Georgy’s relationship into the conventional romantic mode, combined with the rather dramatic and somewhat clichéd resolution to the unfairly-denied noble inheritance subplot, that kept The Lady’s Secret from being a perfect read for me. Not that I did not enjoy the book as a whole – and I especially appreciated its generous length – but the promise of the first half or so was just so high, I wanted that wonderful engagement I had with the characters to last longer. Still, I would recommend The Lady’s Secret as a book that makes nice use of many genre conventions, making it both a familiar and a novel read and a substantially promising debut. B-