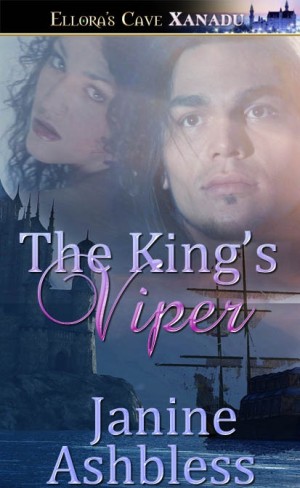 “When Lady Eloise of the Isle of Venn becomes betrothed to the King of Ystria, she looks forward to a life of luxury and status at the royal court. She certainly doesn’t anticipate being shipwrecked on the way to her wedding, escorted by the Kings assassin, Severin de Meynard, the most hated man in the kingdom. Nor does she anticipate them having to make their way back home to Ystria on foot, through hundreds of miles of enemy territory. Above all, she doesn’t expect to fall in love with the cynical, ruthless Severin. Eloise and Severin struggle to control their growing attraction to each other because if they do not if she returns to the King no longer a virgin then they will both be executed. Yet their passion threatens to be far stronger than their self-control, leading them to other ways to satisfy their desires. Severin and Eloise are torn between duty and their burning need for one another, and both will face bitter sacrifice before the end.”

Ever since I fell in love with “Heart of Flame,” I’ve been meaning to try another one of your books. After reading blurbs and hemming and hawing, I finally took the plunge and got “The King’s Viper” since I couldn’t resist the image of the title – that of a deadly man willing to do anything for his King.

The opening of the story threw me off a little. Told from Eloise’s POV, we learn almost nothing about the ruthless Severin beyond the fact that he truly does come across as silent and deadly. He’s a man who could and probably has done just about anything and I wondered why she’d agreed to marry him when she was already miserable from something he’d probably done. The reason is in the story and the story is compelling.

Severin shows his steely nature from the start. When Eloise asks him why the King, his best friend, asked her, a quiet woman of few worldly accomplishments, to marry him, he’s blunt and honest. The King thinks Eloise will be pliable and on her father’s death, his land will revert to the crown. How’s that for plain speaking?

But the festivities are already planned and so off the bridal party goes via ship to the mainland. When disaster strikes, the King’s Viper lives up to his name and reputation. All he does is for his King and since Eloise is to be his Queen, he’ll kill, lie and do whatever is needed to see that she gets where she’s supposed to go Virgo Intacta since anything less will be seen as treason against the man who raised Severin from nothing.

Most of the book is thus spent on an extended road trip across enemy territory with Severin and Eloise watching every step they take and word they utter. Severin sets Eloise straight on their likely fate should they be discovered and later he fesses up what their likely fate will be if they make it home. Along the way, they fall in love.

What does this cold man see in Eloise that not even her betrothed has noticed? Eloise starts the journey as a naïve, young woman. She’s been sheltered but to Severin’s relief, she’s practical and willing to go along with the lies he invents to save their lives. She’s a hard worker, doesn’t complain and impresses him by her ability to improvise. Yet this isn’t what finally cracks his heart.

Eloise is honest above all things. Severin has warned her to guard her emotions and thoughts at court and to beware of those who would use her for their advantage. He’s used to lies, treachery, and flattery as a way of life among the mice and the snakes of court. Eloise’s innocence and truthfulness calls to something deep in him. Yes, she’s a touch teeth clenchingly naïve during their “everything but vaginal intercourse” sex but she’s refreshingly open – and I don’t mean that in only a sexual manner.

So what can the future be for Severin and Eloise who have to prove their loyalty to the King or die? Well, it’s here that the book faltered a bit for me. Severin has laid it out to Eloise – the reasons she will need to be proven a virgin, the ways he’ll be tortured to prove he didn’t despoil the King’s intended and how it’s all going to go downhill from there. After the intimacy of their extended road trip and period of falling in such deep emotional love, this felt like a let down in intensity. Things started coasting along and slowing down. But from the opening events in the story, I knew there was more to come.

The ultimate scene when these two were finally back together and could express their emotions is cathartic. It’s also slightly sad since, as no one has to point out, they still have roles to play in order to keep from losing their heads. As I finished the book, I hoped that there was a sequel since Severin and Eloise aren’t currently faced with a lot of options for a conventional HEA. And this, along with the coasty part above, is why the grade dips. I loved how dark Severin could be, I loved seeing him fall so hard, I loved watching Eloise find a man who would steal the moon for her but, damn it!, I want some payoff for the emotional ride I’ve been taken on and the bitter sacrifices these two have made. I want some rainbows and happy bunnies for these two and right now, I don’t have them. B-