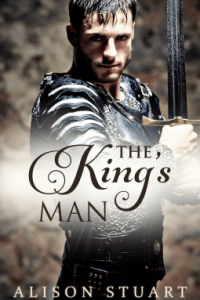 The villain is fond of rape. There are no scenes of rape just mention of it.
–

London 1654: Kit Lovell is one of the King’s men, a disillusioned Royalist who passes his time cheating at cards, living off his wealthy and attractive mistress and plotting the death of Oliver Cromwell.

Penniless and friendless, Thamsine Granville has lost everything. Terrified, in pain and alone, she hurls a piece of brick at the coach of Oliver Cromwell and earns herself an immediate death sentence. Only the quick thinking of a stranger saves her.

Far from the bored, benevolent rescuer that he seems, Kit plunges Thamsine into his world of espionage and betrayal – a world that has no room for falling in love.

Torn between Thamsine and loyalty to his master and King, Kit’s carefully constructed web of lies begins to unravel. He must make one last desperate gamble – the cost of which might be his life.

Like the first book, “By the Sword,” the time frame is after the death of Charles I. The action starts not in the Civil War nor during the various attempts of Charles to regain his throne but during the (for Royalists) bleak days of the Protectorate rule of Cromwell. Kit initially appears to be but one more former fighter who has accepted the (seeming) inevitable and cried pax in order to return to England. As such, he’s welcome in the plotting circles of those still trying to instigate a royal return even if the plots are fantastical and doomed before they begin. But is he?

Kit is also not exactly hero material. He’s got a mistress, shamelessly sponges off of her and turns his hand to milking those with whom he plays cards in order to support himself. His actions save Thamsine yet he’s no savior as he just as quickly dumps her in a tavern job and leaves her to her own devices. He’s been too chicken shit to visit his only surviving relatives in England because he just can’t face them after some things that happened and he almost waits too long to save Thamsine even after he knows what kind of danger she’s in. World weary and tired, he’s not exactly a White Knight.

Thamsine is a gentlewoman who has lost everything – her home, her family and her status in life. Now alone on the streets of London during winter, she’s sold everything there is except herself. At this point, I wasn’t quite sure what to think of her. She certainly doesn’t come off as a tower of strength or cunning, instead relying on Kit to continually come to her rescue while slumping over crying. Not that she doesn’t have a lot to cry about but I wanted to see more than this impersonation of a squashed cabbage.

Spymaster John Thurloe is a delightfully fun character to read about and even if I’d never want to owe him a debt, I’d want him working on my side. He’s the kind of guy readers love to hate but he does have some kind of code by which he abides and comes through, barely in the nick of time, in the end.

The conflicts here are realistic and not of the easily solved variety. Kit has been in Thurloe’s power for years, selling his soul bit by bit. Now he’s got more guilt on his conscience. Thamsine’s attempt to escape her vicious betrothed has landed her in Thurloe’s clutches – also with no way out. A further betrayal lands her in the fire after she’s thrown out of the frying pan of spying.

Thamsine’s past catches up with her sooner than I expected though it still takes all parties involved a while to put the pieces together and call out the hounds. Now what will happen? Well, a trip to a place where no one wants to go and which would have broken her had Kit not raced to the rescue. Meanwhile Kit has a narrow escape from exposure as a spy while still needing to set another doomed restoration scheme in motion.

Thamsine finally grows a pair of ovaries when she bucks up and decides to use her money and influence to help Kit endure the Tower. She comes through for her sister and nieces as well as her arch enemy’s helpless sister. She does have a kind heart, I’ll say that for her. Kit has a deplorable habit of sinking into the drunken doldrums and avoiding people he doesn’t feel up to facing when he thinks he’s past redemption. I hope he works on that or Thamsine lights a fire under him when needed.

The plotting, scheming and kidnapping were getting so involved and convoluted that I was having trouble keeping it all straight. I’m not sure how Kit managed for so long. There are two evil, despicable characters who wreck havoc wherever they go and who frankly got off too easily though Kit’s mercy towards them helped me think better of him for stopping to rub down the lathered horses before facing Morton. Normally I’m all “but what about the animals?” however they could have waited a bit longer and been fine while Kit went to save lives.

The last part of the story seemed almost tacked on and I found it hard to believe that Kit and Thamsine would travel as far as they did and endure what they did only to leave with the mystery still unsolved. I have a feeling about how this issue will be resolved. I guess the third book will tell.

Kit is a lovable rogue and I appreciate that he isn’t all shining knight Uber-Hero but I did want to shake him a few times. Thamsine isn’t a kick-ass, “don’t mess with me” heroine but she does stand up to wrong and see that justice is done. I did enjoy lots of the secondary characters and as violent as some scenes got, they were probably close to the truth or what might have happened. Like the first book in the series, this one is darker in tone even with a relationship HEA. I’ll be waiting for book three. B-