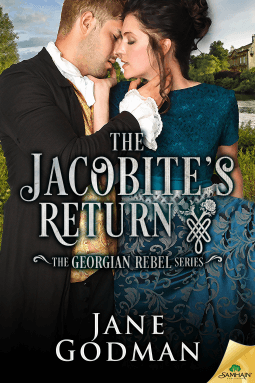 Their love never died…but now they must fight to get it back. The Georgian Rebel Series, Book 3 Before he rode off to the cataclysmic battle of Culloden, rebel Lord Jack Lindsey swore he would return to make Rosie Delacourt his bride. Instead, Rosie’s heart was broken by the news of his death on the field. Her burden of heartbreak only grew as she was blackmailed into marrying Sir Clive and mourned her father’s mysterious death. By the time Jack emerges from a coma, retrieves his memory and returns home with a royal pardon in hand, it’s two years too late. Rosie belongs to his sworn enemy. Yet her cool, indifferent façade doesn’t fool him. This pale shadow of the woman he knew is suffering, arousing his chivalrous instincts.When Sir Clive shows his true colors, danger throws Jack and Rosie together, reigniting the passion they once shared—and revealing the devastating secret she has tried so desperately to protect.

Warning: Contains a handsome, rebellious lord who’d sooner forget his own name than the girl of his dreams, a woman who’s been forced to hide the home fires she’s kept burning for him, and a classic love-that-never-died tale.

Wow, this cover. In a series with vaguely 21st century bridesmaid covers this one hits the ball out of the park. Still it’s a Georgian and for the promise of a true mid 18th century Georgian novel I set aside my thoughts on the cover and the things mentioned in the blurb which would usually send me running. Let me see we’ve got long term heartbreak, presumed death, amnesia, coma, and – in an age with basically no chance at divorce – marriage of the heroine to another man. Okay, Jack’s got his work cut out for him but right from the start I can tell he’s a go getter.

This is obviously part of a series but previous action and characters are quickly outlined and it’s on to this story. Our hero returns from his two years of exile from England with a Royal pardon arranged for his fighting at Culloden which raised my eyebrows but … okay. He knows the love of his life is married to a right arse but perhaps Jack can eventually find a woman to marry who won’t balk at his eternal devotion to Rosie. One look at her and he knows he’s still lost and that she’s miserable with something to hide.

Chivalrous instincts kick in and he and his very promising friend Sir Percy begin to keep an eye on Rosie. Let me just stop here and say I have hopes for Sir Percy. I have suspicions about Sir Percy as well but enough of that and on with the review.

Jack is desperate to know why Rosie married this complete dipshit who is worth less than something to be scraped off the bottom of Jack’s boots. Rosie is intelligent, was vibrant and he knows she loved him so why the two year marriage from hell? Perhaps this was addressed more in the previous books. One reason is fairly obvious from the start but from the many hints mentioned and Rosie’s anguished thoughts on the matter, clearly there are more – though this is a Culloden era book so more can be guessed – reasons and she thinks them sufficient.

Meanwhile Rosie has obviously been through the ringer. She’s married to an threatening asshat and trying to keep her child, her younger brother, his estates, her money and herself safe. She’s thought the love of her life dead but she’s managed to keep it together anyway. Rosie is a strong heroine even if she does (usually) decide that no one is going to tell her to stay away from trying to help those she loves. This turns and bites her a time or two but she’s a game woman in the face of danger.

It’s truly a breath of fresh air that Jack doesn’t go all pouty, injured “the faithless hussy has betrayed me” so “I’ll never love again” or “I’ll make her suffer. Suffer, I say!!” Here is a man who readily admits he loves Rosie despite all the (still) unanswered questions and who sticks to his promise to be there for her if and when she needs him. His occasional moments of high handedness are nicely balanced by his charming, roguish sense of humor.

A road trip and a chick-in-pants bit (Rosie is headstrong, after all) later and the final act begins. Some of the end bits I had pretty much figured out. Some were a bit shocking. The villain turns into one of those “foaming at the mouth” types I dislike but one action of his saves Jack or Rosie from having to do something that might have haunted them. Jack and Sir Percy – please, may I hope I have him figured out? – tie up some loose ends and then the HEA Jack and Rosie waited for finally arrives. I did wonder at Jack’s comment about adopting Rosie’s son as his heir – Jack is, after all an Earl – and I was slightly confused about how a possible way out of that dilemma doesn’t appear as if it’s going to be used but blurb worries aside, I am glad I gave this one a try. B-