As the madam of Aphrodite’s Grotto, the most infamous brothel in London, Coral Smythe knows everything possible about men’s needs and desires. Yet she’s never experienced the love of a single man-‘not even that of Captain Isaac Wargate whose hawk-like eyes stare at her with both condemnation-and lust.

Captain Wargate heartily disapproves of the sensuous madam who always wears a golden mask. She lures his officers from both his ship and their duty. But when Coral herself is offered up as the prize in a game of chance, Wargate impulsively enters-and wins.

Now the puritanical navy captain has just seven nights to learn everything he can about the mysterious madam and what she knows of a man’s desires. But when Coral is threatened by the new owner of Aphrodite’s Grotto, will Wargate take a chance on the woman beneath the mask-and on love?

Yep, Sin, ecstasy and love. The perfect blurb description. Except, wait a minute!, there’s no Duke and the heroine is, gasp, a madam of a brothel. I had started to read this novella when you began to publish chapters on your website but after a while I forgot to check for new material and time slipped away. When I finally looked at it again, I saw it had been published as an ebook and decided to just buy the whole thing. I enjoyed Coral during her appearance in “The Raven Prince” and am not disappointed in her story. 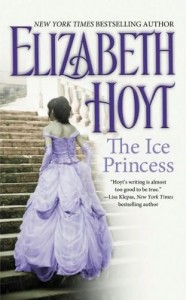 old, like the other “Princes” books, with a fairy tale – Coral is obviously the Ice Princess whose heart is frozen even while she longs for love. She’s encased herself and her heart to avoid pain, separating herself from what she does. She won’t let a man into her private life and is therefore shocked and angered when Isaac demands to be taken to her private rooms for their 7 nights vs the gaudy, stage set whore’s rooms she initially takes him to.

Isaac plays his hand carefully, like luring a skittish wild animal into trusting and believing him. He’s quite clever at this – just sleeping one night and playing a game the next. He talks with Coral thereby treating her like a person unlike all the other men who just wanted sex. He wants to get to know HER. This flabbergasts Coral. Who is this man? Why won’t he act like all the others and be satisfied with the outer shell of herself that she’s sold for years? He also lures her into revealing that which she’s kept hidden for years – the face behind her golden mask.

He keeps her off balance throughout the week, never going the easy way or accepting the pittance of herself she’s willing to offer. I kept thinking how horrible would it have been for her had she allowed him inside her heart only to end up being stuck back in Aphrodite’s Grotto once he’d left. He demands a lot of her but he also shows her himself – now, now don’t think nasty – to her so she can see him as a man rather than just a customer.

I like that Isaac doesn’t denigrate Coral for choice she made to begin her life of prostitution – she’s engineered things well for a person in her position and gotten the best deal out of life that she could. Isaac shows her sexual pleasure and makes sure that she feels it unlike the other men in her life who have been content or accepted that she got no enjoyment out of the acts they’ve done. As Coral thinks, prostitutes don’t deal in love, they deal in sex. That is until Isaac shows her real love.

Only the fact that she’s mainly kept to protectors vs the general public allows me to keep buying into the fairy tale that she isn’t a bubbling pot of venereal diseases after so many years in the profession. But then the story really does have to be read as a fairy tale and not just because of the “Ice Princess” one sprinkled throughout. It’s well known among his officers that he’s been to Aphrodite’s and I can’t imagine that the story won’t spread. That plus the fact that “Aphrodite” suddenly disappears only for Isaac to, equally suddenly, marry a few months later would have to be put together, like 2+2, by someone. But if they want to believe that her mask will have protected her identity as a madame, who am I to quibble?

After Coral buys out Jimmy and turns the Grotto over to the girls and bully boys, she leaves and hopes that Isaac will come after her. But as God told the man who kept praying to win the lottery then got disappointed when he didn’t, “You have to at least buy a ticket!” So since Coral didn’t intentionally leave any info about where she was going, she can’t get but so mad at Isaac for taking so long to find her. And he does propose so nicely.

So yes, it’s better to put on rose tinted reading glasses while checking this one out but I did and enjoyed myself. Thanks for giving Coral a HEA with a man who demands all of her so that he can love every bit of her. B-