“It started with a baseball…

Which shattered Lauren Russell’s perfectly ordered life. Lauren’s new neighbors were about to see the Southern lifestyle columnist’s temper! Then she met Cole Donovan, the sexy single dad. He was not the man from her husband list; he was too tall, too sexy—and definitely had too many kids! But somehow, looking into his blue, blue eyes, she forgot all that….

Lauren was too elegant, too prim and didn’t understand that his three rambunctious kids were the focus of his life. But his tempting neighbor smelled delicious, looked luscious and cooked like a dream. Cole wasn’t looking for a wife, but he couldn’t stay away from Lauren. Was it a recipe for disaster—or marriage?” 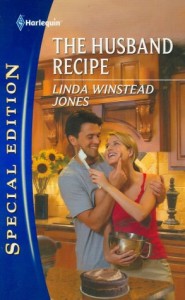 There still sure are a lot of Harlequin authors who I haven’t tried yet and it just happened to be your newest book which caught my eye next. My own house is a disaster and my cooking – though I love to do it – often depends on how many pots and pans I’m willing to get dirty at a time. I envy people who can look into their pantries and whip up something scrumptious from what’s there so Lauren’s profession called to me. Then it’s also kind of fun to watch an ordered person’s world upended and it appeared that these three children would accomplish that. And who isn’t interested in sexy? So, selection made I got to reading.

Cole and Lauren begin to interact almost cautiously. Neither had counted on meeting the other, both have lives and plans and they take things fairly slowly, get to know each other and establish a foundation before jumping into bed. They get to like each other before they start to love each other. They’ve also dated in the past and are open to possible relationships. This is important to me because I don’t like characters who fixate on one past love to the exclusion of all others. I’ve just read that trope too often. Here, Cole and Lauren seem like fairly normal, well adjusted adults.

The three children also come across as such. They’re definitely not plot moppets and are neither perfect, lisping angels nor spawn from out of a nightmare. They run around, they play, they like to eat fish sticks and don’t want to brush their teeth. The’re also intelligent and view their dad’s relationships in the way young children would – how the dates would affect them. I especially think Meredith’s character is well drawn as a young woman on the verge of growing up but who’s still got a bit of maturing left.

A major thing I like about the book is that both Cole and Lauren don’t immediately dissolve in a puddle of lust. In fact, despite noticing each other’s better physical qualities, they remain relatively in control until after quite a few meetings. When things do heat up, they sizzle yet at the same time there’s a degree of humor that had me laughing such as the first time Cole arrives at Lauren’s house and sex is on the agenda.

“Reality intruded like a splash of ice water. “Oh, tell me you came prepared.” When she’d thought about not overthinking, that hadn’t meant they shouldn’t think at all.
His voice was raspy as he responded, “Do I not look prepared?”
She smiled, touched him, leaned in so her breasts rested against him. He was so warm. Almost hot. “A condom, Cole. Please tell me…”
He squatted and reached into the back pocket of his jeans, pulling out three wrapped condoms. A baby monitor and a three-pack. He was most certainly prepared.”

I do like some humor with my sex. Some smiles along with the sparks. And things were going well until the last minute additions of Complications to the mix combined with the panic button pushing done by both Cole and Lauren. One person sounding the “I’m not sure I’m ready for this” alarm is understandable but when they both did it, it was too much. This followed by the quick realization by both of them that they’d messed up all seemed too much like plot manipulations and running out of space rather than the natural flow of a relationship.

This slight hiccup is somewhat redeemed by a good, solid ending. Both Cole and Lauren have come to their senses, they talk and it doesn’t appear that Lauren is ready to throw over her career to be a baby maker. The children and adults are all on the same page about the relationship and things look good without an immediate frog march down the aisle to show how deliriously in love everyone is. Overall, I’m impressed with “The Husband Recipe” and have added you to my list of watched authors. B-