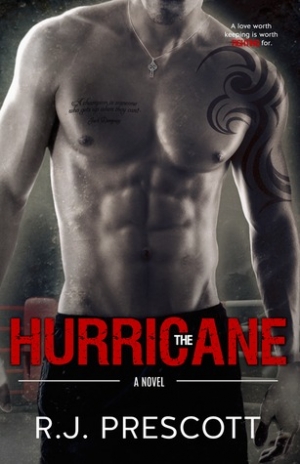 Angela James told me to read this. I do whatever she tells me. Actually I think she read this because she asked for feel good romances on Twitter and someone recommended this. She (and the original reader) are right that this is a feel good story about a damaged heroine and a dedicated hero.

Emily McCarthy escaped an abusive stepfather to start a new life at University of College London. She works at a cafe part time and attends classes. One of her regulars is an older man named Danny. He takes a shine to her and asks her to come do the books part time at his gym.

Cormac O’Connell works construction and is a member of Danny’s gym. From the moment he laid eyes on Daisy, he’s been intrigued. He’s a gifted fighter, but hasn’t put a lot of effort into training, much to Danny’s frustration. When Connor decides that he wants Emily, he also wakes up to the realization that he can’t spend every night drinking and every day giving a half assed effort. He throws himself into training so that he can win matches and gain sponsors.

Cormac and Em are quite poor and I really liked this portrayal. It was a refreshing change from the multitude of billionaires. Em lives by herself in a run down apartment and Cormac lives with a friend, having moved out of his childhood home after one too many fights with his mother. He can’t fix her heating problem or move her to some new fancy apartment and it’s not until he gets a sponsorship that he’s even able to buy her a heavier coat.

The story is mostly about Em moving beyond her past and being able to open herself to love. She does screw up from time to time but fortunately she grows a spine later in the book. Cormac is endlessly patient and loving with her.

One of the best aspects of the book is the secondary characters, particularly the other fighters at the gym. As Cormac is wooing Em, he says that he’ll be fine with being just friends but does things like hold her hand or kiss her. (I read this on Scribd and couldn’t copy and paste).

Kieran is a funny and enjoyable foil for the more serious Cormac. The best man speech he gives is wonderful. 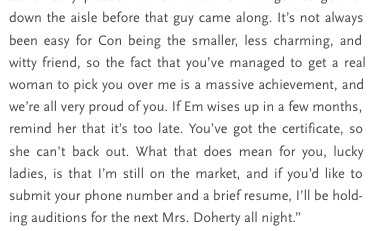 It takes time for the couple to get together because Em is afraid, both of herself and of the shame of her past but Cormac told her that he was willing–and happy–to wait.

There are no surprises in this book. The one female friend is portrayed as better looking and somewhat promiscuous. I did feel that there was some low level slut shaming going on in the portrayal of the villainous women as loose, makeup wearing, short skirt, big boobed women–not to mention that they are referred to as sluts. I could have done without that.

It’s a safe and sweet read and minus the slut shaming, a nice way to spend the evening. I read my copy on Scribd.  B-