REVIEW: The Heir from Nowhere by Trish Morey and The Secret She Can’t Hide by India Grey

The following are two secret baby stories but very differently portrayed. In Morey’s story, the pregnancy arises out of a botched fertility experiment and in the Grey story, amnesia leading to a lost father.  I am always terribly amused when HP authors manage to bring in more than one romance trope to their stories.  Secret baby and amnesia? It deserves a positive grade just for that. 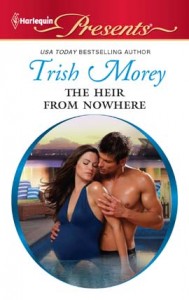 The Heir from Nowhere by Trish Morey.  There are two problems with the story for me, the first being believability. Oh, I know that seems like a crazy accusation to level against an HP, a series that pretty much thrives on the fantastical more than even paranormals but in bringing together two disparate individuals, the circumstances of their connection needs to be authentic.  Angie Cameron was mistakenly impregnated with the fertilized egg belonging to the wife of Dominic Pirelli.  The results of the mistake are found 12 weeks later and Angie contacts Dominic to tell him the news.

Angie becoming pregnant with Pirelli’s child in the first place seemed impossible.  The clinic that Dominic used was so expensive and so exclusive that Angie shouldn’t have even got through the door let alone be allowed fertility treatments.  This was even more baffling because Angie’s husband didn’t want her to go through with the treatments so why would he “scrape together the money for the procedures” and then “cancel a holiday” and get “a subsidised place in the Carmichael Clinic.”  Angie’s supposedly despised husband’s actions didn’t match up with what we needed to believe about him – that he was an emotionally cruel man who left Angie with nothing.  To make Angie seem even more desperate, Angie’s husband left her for a teenage girl and took the car and all of the furniture except a couple of chairs.  Angie is living in her house with mounting bills, no food, no furniture, and “thin” ragged clothes.  It’s like a Dickens book, only not.  How could they have afforded any fertility payments if they were one step away from true poverty?

Angie was left so destitute that it was a miracle she wasn’t homeless in the streets. At least, that is the picture that is portrayed.   She was described as thin, waiflike; a “ragged urchin” with an “unkempt ponytail.”  The imbalanced power dynamic was troubling. I kept wondering why Angie had to be made so down in the mouth, so virtually incapable of taking care of herself in order to make the romance work.  Ultimately, it was Angie’s weakness that really led to my dislike of the book. I know I was supposed to see Angie as this internally strong woman, refusing to have an abortion, carrying on like a martyr, but I kept thinking that maybe if she got a job and a little public assistance she wouldn’t be the lonely street urchin just waiting for the rich man to sweep her up into his arms.  Good thing that she is a presents heroine, though, because Dominic takes her away and solves all her problems. Yay!

I know I’ve enjoyed Morey stories in the past, but the extreme self pity Angie presents was too much for me to take.  D 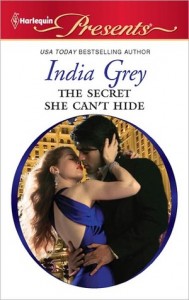 The Secret She Can’t Hide by India Grey. Kate Edwards was sent to interview Grand Prix race car driver, Cristiano Maresca, and instead ended up in bed with him, in love with him, and impregnated by him. Only Cristiano was involved in a terrible racing accident after they met and lost his memory.  His handlers, a jealous woman in particular, kept everyone at bay, even Kate.  Kate’s pregnancy and Cristiano’s  fatherhood was kept a secret from him.  Cristiano decides to return to racing four years later and Kate screws up the courage to tell Cristiano once more about the son that they made together.

Kate, unlike Angie, was not a martyr.  She had friends and was able to have her baby and take care of her son without the help of some Presents hero.  She even has a house and furniture!  But she does acknowledge that she should make one more attempt to bring Cristiano the news he has refused to hear previously. There was a good enough explanation for me on both sides as to why Cristiano was still unaware of his son’s existence.

What I liked was that Cristiano, upon seeing Kate again and still suffering from memory loss, is attracted to her again.  Whatever connection Kate and Cristiano had four years ago wasn’t fleeting.  The amnesia of Cristiano’s is used to affect the right amount of agnst. Oh, the pain that Kate feels when Cristiano treats her like he has never seen her before is delicious. I ate it up with a spoon (I know this sounds macabre but this agnst is exactly the reason I read HPs).  What was surprising was the direction the story took. It many ways it was unpredictable even though it incorporated many of the HP mainstays – the secret baby, the amnesia, the marriage of convenience, misunderstandings.   I was always a little off balance in the story and I wasn’t sure whether I liked that. In some sense, I felt like I wasn’t given the time to absorb the characters’ feelings about one issue and then the next. I wasn’t allowed to savor the moments. But I liked Kate and Cristiano who seemed like equals, maybe not in the pocketbook, but certainly in all other areas. B-

→ Jane
Previous article: First Page: Where the Boys Are (Futuristic Romance)
Next Post: Why DRM Won’t Be Abandoned Soon