REVIEW: The Handbook to Handling His Lordship by Suzanne Enoch

JaneB- ReviewsHistoricalComments Off on REVIEW: The Handbook to Handling His Lordship by Suzanne Enoch

The best thing about the romance was how it brought up and addressed the repercussions of an interclass relationship during the Regency period.  Often you have dukes and maids or shopkeepers getting married but there is no resulting social approbation.  Given how classist society was during that time period, these romances are always tainted with the specter of unbelievability. 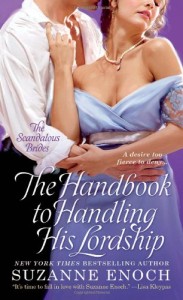 Emily Portsman is a woman with a secret.  That’s why she’s working at the Tantalus Club.  What started as one woman’s way to earn a living and gain independence has blossomed into a haven for other females.  No one asks too many questions which is a good thing because Emily has a lot of things to hide.

Nathaniel Stokes is man who people hire to ferret out secrets.  He had to retire from as a spy when a distant cousin died and the title of the Earl of Westfall passed to Nathaniel.  He isn’t a very good Earl but he has continued to help people find things, accepting a nominal fee in exchange.   The Marquess of Ebberling hires him to find a governness he once employed, accusing her of having killed his former wife.  The Marquess is set to marry another woman and wants this extraneous detail taken care of.

After not much success in looking for  the governness, Nathaniel heads to Tantalus where he raises the interest of Emily with his not so discreet probing of the Tantalus Girls.  Emily is attracted to Nathaniel and scared of him so she takes him to her bed, hoping that in between the sheets he will divulge enough information for Emily to know whether she has been compromised.

The murder mystery is resolved fairly early on.  Nathaniel puts two and two together and decides either his instincts about Emily are completely off or the Marquess of Ebberling hasn’t told him everything.  But Nathaniel is an Earl and Emily is not only lowly born but she works at the Tantalus Club where, for all its protections, is not much more than a Casino with a few backrooms that the girls can use for their own pleasure and private business.  Marriage between the two of them would be fairly outrageous.  Moreover the specter of the Marquess of Ebberling’s accusation continues to hang over Emily.

Emily and Nate are intelligent and while they are dancing around their half truths with each other, they are insightful enough to know that the other isn’t being fully forthcoming.  The fact that neither are deceived by the others’ half truths and omissions makes this work.

And even though Nate is an Earl and Emily is a Tantalus Girl, they seem to be equal in power.  Emily takes Nate to her bed because she wants him; not because she has to.  She has support in the form of other Tantalus Girls and the owners. Emily is not alone.  Nate wears his earldom uncomfortably.  He was a spy and feels most at home when he is doing detective work, instead of idling at the club and memorizing Debrett’s.  They match.

While the resolution to the class issue made sense and was seeded from nearly the first page, the way in which the Marquess of Ebberling was handled seemed farcical and not intentionally so. You aren’t much for epilogues and I think your books, out of all books, could use a few.  Definitely the end of this book met the romance standards but I could have used another chapter seeing both of them easing into their married life together. This is my favorite so far in the Tantalus Girl series but probably because I liked Emily so much.  Her pragmatic demeanor and adult manor when it came to sex was refreshing.   B