REVIEW: The Girl in the Park by Mariah Fredericks

I was in the mood for something different when I ran across your novel. A reader can take only so many paranormal and dystopian YAs before she loses it. A YA mystery/thriller sounded right up my alley. Your novel delivered what I needed, along with something more. 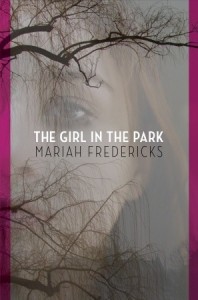 Rain was once best friends with Wendy Geller. Both outsiders at their exclusive high school — Rain, because of a cleft palate that left her speech imperfect and Wendy, because she came a less privileged background — the two bonded immediately. Rain was shy and quiet; Wendy was outgoing and took no crap. But they drifted apart over the years as Rain remained shy and quiet while Wendy became a bonafide party girl with a penchant for messing with other people’s boyfriends.

Then the worst happens. Wendy doesn’t return home one night after a party. When her body is found in Central Park the next day, people shake their head and hold her up as a cautionary tale. Look what happens to party girls. Never go home drunk or high. Don’t walk through a park alone at night.

But Rain thinks differently. She was at that party. She talked to Wendy. She didn’t seem drunk and she didn’t seem high. Something doesn’t add up. Everyone assumes it was a random attack, but Rain fears the murderer might be closer than everyone thinks.

I enjoyed this book. It was a fast read, not just because of the short length but also because of the way it was structured. Rain made a wonderful narrator. She’s never been able to speak up for herself. But now that Wendy’s dead and no one can speak for her, she takes it upon herself to do just that in order to find her friend’s killer.

I also liked the look into Wendy. Her character is one that’s often vilified in fiction and in real life. The book pulls no punches and makes it clear that Wendy liked to mess with other girls’ boyfriends, usually in retaliation for the way those specific girls treated her. But there are two details everyone forgets. First, the cheating boyfriend also holds some responsibility; just because a girl goes after you doesn’t mean you have to take her up on it. And secondly, for all that Wendy is treated like crap and gossiped about, she’s still accepted into their social circle because she entertains them. Everyone was always looking forward to seeing what she would do next. In fact, many of them egged her on in her antics and boyfriend-stealing ways. That’s hypocritical.

The incorporation of Facebook was also well done. You always hear the warnings about social media and not putting too much online. You never know the impression you’ll leave. Often this is in the context of seeking employment. If employers are checking up on you, you probably don’t want to make those photos of you doing body shots in Aruba public for anyone to see. But the aftermath of Wendy’s murder shows how else putting up photos, status updates, and videos can leave an impression. With those things used as evidence, Wendy would obviously look like a party girl of the worst kind. And if no one speaks up for her, that’s the image everyone will be left with.

I also liked the commentary about the media and how it’s a feeding frenzy when it comes to cases like this. They swarm the school after Wendy’s death. They comb over the relevant Facebook accounts and exploit everything there to put together the story they want to tell. After all, with the victim dead, who’s going to gainsay them? I liked how all those things came together.

The true identity of Wendy’s murderer really took me off-guard. Looking back, I should have predicted it. I knew the person who eventually does get accused of it was too obvious a choice, but I never even considered the possibility of the real killer. Perhaps because the thought is just too horrible in many ways.

Rain’s emotional struggle throughout the novel — her guilt, her anger — really pulled the story together for me. I liked the exploration of how the faces we present to other people don’t necessarily capture the entirety of us. In fact, one person may see a different face than another. Yes, Wendy was a party girl and it’s easy to paint her in a completely negative light. But people are more complicated than that, and I thought this novel did an excellent job showing that. B-