REVIEW: The Geography of You and Me by Jennifer E. Smith

KaetrinB- Reviews / C+ ReviewsContemporary / YAComments Off on REVIEW: The Geography of You and Me by Jennifer E. Smith 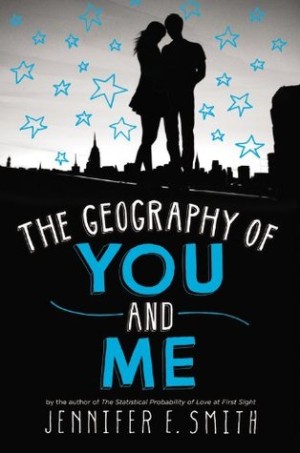 Lucy and Owen meet somewhere between the tenth and eleventh floors of a New York City apartment building, on an elevator rendered useless by a citywide blackout. After they’re rescued, they spend a single night together, wandering the darkened streets and marveling at the rare appearance of stars above Manhattan. But once the power is restored, so is reality. Lucy soon moves to Edinburgh with her parents, while Owen heads out west with his father.

Lucy and Owen’s relationship plays out across the globe as they stay in touch through postcards, occasional e-mails, and — finally — a reunion in the city where they first met.

A carefully charted map of a long-distance relationship, Jennifer E. Smith’s new novel shows that the center of the world isn’t necessarily a place. It can be a person, too.

I was quite charmed by the blurb and there was something about the title that piqued my interest, so I requested this book for review.  I had hoped it would be an epistolary book – something for which I have much love.  I hoped to see the postcards, text messages, letters and emails they exchanged when they were in different places.  Unfortunately, it wasn’t what I was expecting.  I can’t really say how much that informed my overall opinion of the book, but I know it didn’t help.

While I understood from the blurb that Owen and Lucy would spend a lot of the book apart, I had hoped to see their connection grow via postcards and other communications.  Instead, the story seemed to me more about the individual growth of each character, with a dash of romance thrown in.  It has a hopeful happy ending and there are parts of the story that are very romantic, but… it didn’t quite scratch my itch.

Perhaps the fault is mine – I have little experience reading YA and my main interest is romance (if it’s a YA romance, that’s fine but I know that YA is a far wider category and romance is a subset of it).

Owen’s mother died and he and his dad are trying to put the pieces of their lives back together and, during the course of the book, slowly, they do.

Sometimes it seemed as if his whole life was an exercise in waiting; not waiting to leave, exactly, but simply waiting to go. He felt like one of those fish that had the capacity to grow in unimaginable ways if only the tank were big enough. But his tank had always been small, and as much as he loved his home—as much as he loved his family—he’d always felt himself bumping up against the edges of his own life.

Lucy is, not exactly estranged from her parents, but they seem to live quite separate lives – little satellites not really connecting.  Lucy longs for that connection and over the course of the book, slowly, this grows between her and her parents.

The coming of age aspects of the story were moving and I think if I had approached this book as that kind of story, it would have worked better for me.  (Let’s leave aside that if that were the case, I probably wouldn’t have approached it at all because I’m primarily a romance reader.)

I enjoyed the word pictures created for me – like here, where Lucy is considering the elevator where she first speaks to Owen:

And how many times had they all been stuffed in here together? Dad, with his newspaper folded under his arm, always standing near the door, ready to bolt; Mom, wearing a thin smile, seesawing between amusement and impatience with the rest of them; the twins, grinning as they elbowed each other; and Lucy, the youngest, tucked in a corner, always trailing behind the rest of the family like an ellipsis at the end of a sentence.

There was some beautiful writing in the book.  Some of it seemed… lightly written but heavy with meaning and portent.  I found it wasn’t a book to skim – it felt a disservice to the prose to do so.  I felt the need to read more slowly and let my mind roll over the words and their various meanings. There was a kind of spare beauty to much of it.

“What do you want to see most?”

“Notre Dame,” she said without hesitation.

“Why?” he asked, expecting to hear something about the architecture or the history or at least the gargoyles, but he was wrong.

She nodded. “There’s a little plaque with a star in front of it that marks the spot: Point Zero. And if you jump on it and make a wish, it means you’ll get a chance to go back there again someday. There’s something kind of magical about that, don’t you think?”

“It’d be nice if every place came with that kind of guarantee.” He leaned over to draw an X between them with the piece of gravel, then rubbed it out with the heel of his hand and replaced it with a crooked star.

“Does that mean we’re in the exact center of New York?” she asked, nodding at it, and he felt momentarily unsteady beneath her gaze.

“I think,” he said quietly, “that we’re in the exact center of the whole world.”

I find the book hard to grade because as a romance, it didn’t deliver what I was hoping for, but at the same time, what it did deliver wasn’t bad by any stretch.  I ended the read feeling vaguely melancholy and unsatisfied.  The other aspects of the story were meaningful, important and well written but there was something that kept me distanced from the prose. It may have been a function of the style which was episodic –  more like little glimpses into what each character was doing and feeling. I didn’t find it immersive and I couldn’t just relax into it like I wanted to.  In the end, it was a book I admired but did not love.

I think, if one approaches this as a YA coming of age book with a gentle romance arc to it, it would probably be a B/B- but for me, with my expectations and my distance, I ended up at a C+.