I first encountered your debut novel on NetGalley. I admit I’ve always been fond of historical YA, especially if there’s a paranormal flavor. Your book sounded like the ticket. It was a nice change of pace from the urban fantasies and dystopians overwhelming the genre right now. The unique setting was just icing on the cake. 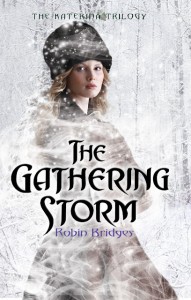 Katerina Alexandrovna is a young aristocrat in late 19th century Russia. She’s expected to marry rich and marry well and thus, is attending finishing school. The very idea is sheer torture to her. She hates the balls, which she considers to be meat markets. In fact, she’d much rather spend her time studying medical textbooks. Katerina dreams of becoming a doctor even though the profession is considered absolutely out of the question for a woman. Especially a noble one, because what suitable husband would allow his bride to do something so pedestrian as treat the sick and poor?

But Katerina has one little secret: she can raise the dead. Some people would consider it a gift. She thinks it’s a curse and has kept her ability hidden from everyone. After all, it’s abnormal and she doesn’t want to be viewed as a monster. Unfortunately, her gift is discovered and soon Katerina finds herself embroiled in a political conflict between the supernatural forces that rule Russia.

I really enjoyed Katerina as a protagonist, but I admit I have a weakness for heroines who love science. I thought it was a good choice, however, given that this time period in Russia is one characterized by superstition and folk belief. Katerina’s mother depends on her tarot cards and routinely holds séances. In fact, it was at one of these séances that Katerina accidentally discovered that she was a necromancer. But she loves science and the advances in modern medicine. There’s already conflict between her career aspirations and her class. To toss in her ability, which drags her back into old world beliefs is great.

One thing I did have a little trouble following was how the supernatural world overlapped with the Russian court. In this world, the Light and Dark faerie courts battle it out in a political dance of power. Some families are aligned with the Light Court (like the tsar) and others are aligned with the Dark Court. Katerina is, I believe, aligned with the Dark Court due to her family’s social circles. It’d make sense considering the fact that she is a necromancer. But on top of that, there are werewolves (I thought it fairly obvious who the werewolves were) and vampires. So many different kinds of vampires, I lost track of who was important, how, and why. At times, it was a little tough to figure out which characters were allies based on their family ties and which were enemies based on their supernatural ones.

I thought the plotline involving Katerina trying to find a way out of the Montenegro family’s schemes was interesting. After all, who wants to become the sacrifice to make a new living vampire? Certainly not me. On the other hand, I thought the romantic subplot was poorly executed. It was fairly obvious who Katerina would ultimately fall in love with, given the fact that one of the potential suitors is Evil with a capital E. But even though I knew and expected it, I needed something more to go on. It seemed like Katerina went from arguing with and disliking him to realizing she was madly in love in a snap. That transition phase between the two states didn’t entirely come through, in my opinion.

While the ending was a little too heavy-handed in setting up the sequel, I really enjoyed Katerina as a heroine. I’m a big fan of characters that love their family and do everything to protect them, even if it’s a mistake by our standards. I’m interested to see how future books balance her career aspirations, burgeoning powers, and new obligations so I’m definitely on-board for the continuation. B-

→ Jia
Previous article: GUEST REVIEW: Surprises According to Humphrey by Betty G. Birney
Next Post: REVIEW: Still Hot For You by Diane Escalera