REVIEW: The Forgetting by Nicole Maggi 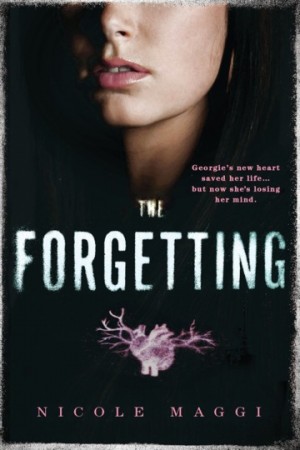 Your novel, The Forgetting, has a familiar premise if you watch lots of horror movies. Person needs an organ transplant. They get it. Then the person begins to catch glimpses of the donor’s life and discovers the donor may have been murdered.

Georgie’s story has less of a horror aspect, though. Hospitalized for a severe case of pneumonia, Georgie is the extremely lucky recipient of a heart transplant after her heart fails. Her young life isn’t cut short. Prognosis is good for a full recovery, and hopefully she’ll be able to fulfill her lifelong dream of attending Julliard.

But things soon go awry. Georgie begins to experience memories that aren’t her own. For example, she remembers eating strawberry cake for her birthday—even though Georgie has a severe allergy to the fruit. What makes things even creepier is that for each memory she experiences, she loses one of her own. Talk about making a traumatizing experience even more traumatizing. Because of this, Georgie looks into her donor’s past and discovers the existence of a local sex trafficking ring.

It’s past life/new life week here for me on the blog, I guess. It’s interesting to read this book after Megan Miranda’s Soulprint. Annabel isn’t Georgie’s past life, but her actions and choices resonate into Georgie’s present. I don’t think it’s shocking that our heroine goes through a worldview shift after the transplant. Everyone expects her to be the same as before, with the same priorities. But when you almost die, maybe your lifelong dream of attending Julliard loses its importance. When you learn the plight of other girls your age, maybe you end up looking at your own privileged life with new eyes.

Much like those horror movies I mentioned, there’s no explanation for why Georgie catches glimpses of Annabel’s life. You just have to accept this is a thing that can happen. If you can’t, then the rest of the book will be a slog. Because there are a lot of lapses and coincidences that happen in order to propel the plot along — such as how Georgie discovered enough information about her donor to unearth the identity or how she ultimately obtained her donor’s case file.

I liked that the book acknowledged the screwed up nature under which Georgie and Nate met. Nate loved Annabel, and Georgie is attracted to Nate, but is she attracted to him because she has Annabel’s heart? Does he reciprocate because some part of him recognizes Georgie has a piece of the girl he once loved? The way her secret spirals out of control, and the way Nate reacts when he finds out were well-handled in my opinion.

While I appreciated that the book handled some heavy themes, there were parts that read a bit preachy to me. Not just the plight of the teenage prostitutes, but also the explanation of trans issues or privilege felt very anvilicious. Don’t get me wrong. I’m glad these aspects were addressed, but I thought they could have used a little more subtlety in the way they were presented.

I also wish Georgie’s friends were more present. I get that the transplant changes her, and those changes strain their friendships, but it would have been nice to see that strain play out more on-page rather than putter out and fade away. I want to see female friendships in all their glory – the good and the bad, particularly when that bad has nothing to do with fighting over a boy.

This book is a little hard to grade. There were parts I really liked and parts that made me tilt my head a little. Balancing things out, though, I’ll give it a solid B-.