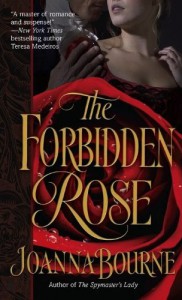 Those who have read The Spymaster’s Lady know that William Doyle, one of the greatest British field agents married a French aristocrat named Maggie. The Forbidden Rose is their love story. Set approximately five or six years before The Spymaster’s Lady, readers are introduced to Marguerite de Fleurignac. Marguerite is one of the leaders of La Fleche, a group of French men and women dedicated to saving people from the guillotine. Robespierre’s Reign of Terror had been going for approximately five years and while history places this at the end of the Reign, the participants in the book are in its full grip..

William Doyle was sent to find Marguerite’s father who is suspected of providing names of key British people to the French. The men on the list are slated for assassignation. Find the father. Get the names. Those are Doyle’s orders. The father cannot be found, but Marguerite is easily located at the family chateau in the country, particularly after said chateau is burned to the ground and Marguerite is chased into the countryside. Marguerite presumes this is because someone has found out that she is part of La Fleche and when she is helped by William Doyle aka Guillaume LeBreton, she decides to travel with him and his young manservant, Adrian Hawker.

Marguerite is convinced that La Fleche has been totally compromised and is trying to find spread the word to the operatives to disband. Doyle plans to follow Marguerite believing she will lead him to her father.

Marguerite was a cipher for me. I never understood why she had involved herself in the movement of saving the aristos. She thinks of them in quite disdainful terms and without much affection. I’m not sure if she was supposed to be a casual anarchist, lover of no government, but her allegiance wasn’t to France. She was presented as a woman of strong convictions due to her involvement in the smuggling of those threatened by the Reign out of France, but her philosophies seemed non existent. I kept asking what drove her to take such risks, not just with her life, but with those around her. She was described as a leader, a brilliant strategist, but again, I saw none of that. Even at the end, when this was supposedly on display but even her brilliancy rested upon two good ideas. Most of the time, she followed Doyle’s direction, relying on him and Hawker to get them out of spots. Maggie, for all the excellent prose, seemed like a very superficial character.

Doyle was fairly straightforward. He became a member of the Service at a young age and his allegiance was clearly to Britain. This isn’t to say he wasn’t nuanced, but I understood him.

Adrian Hawker was probably the most interesting. Aged 12, Adrian had worked, killed, spied for a notorious man in London called Lazarus. Adrian undertook a task for Lazarus which placed him in proximity with the Service and Doyle took Adrian under his wing, so to speak. Watching Adrian sneak around, playing his spy games at the age of 12 (almost thirteen) lent poignancy to the situation. Was this how it was for Doyle when he had run away from home? It lent depth, even, to The Spymaster’s Lady particularly when we are introduced to yet another young child, a girl, who was heavily involved in the spy game. It is Adrian and this girl, Justine, and her younger sister, Severine, that provide a very bittersweet and memorable part. It is this story that stuck to my guts far longer than the romance of Maggie and Doyle.

As mentioned previously, the prose is superb. The dialogue is witty. The sensuality moving without being coarse. The lovemaking in the story expresses the evolution of the romance. Maggie is someone who is good with topography and maps and she looks and thinks about Doyle in that manner:

She could become lost in this man, in territories of amazement, countries of sensation. She felt the currents of his blood. He was not merely LeBreton, villain and rogue. He was more complex than that, and simpler.

She bent toward his mouth. He stretched upward to her, to meet her. It was as if she attached a string to a mountain and it came to her when she pulled. His lips were smooth and hot. The trembling she felt was all her own. The doubt and the nervousness, all hers. He had no doubts at all.

The Forbidden Rose is a gorgeous story yet I felt distanced from it because I never was able to connect to Maggie. That said, I feel really fortunate to have an author like you currently writing so I can look forward to future stories. B-

This is a Berkley mass market. Berkley is a division of Penguin and subject to Agency pricing.