The McKenzie family epitomizes the Byronic creed of being mad, bad and dangerous to know. The MacKenzie head of the family was a horrible man who beat his kids, sent his youngest son into an insane asylum, and ultimately killed his wife. Hart MacKenzie, the eldest, did all he could to protect his family, saving his brother, Ian, providing money for his brothers. But the instability of his home life drove Hart to become obsessed with power, believing that power would save his brothers and even when the brothers no longer need saving, Hart can’t let go of his quest. It is his obsession.   Yet for all the money and power, Hart could not protect his family.  The unofficial motto of the MacKenzie family was that they broke everything that they touched. 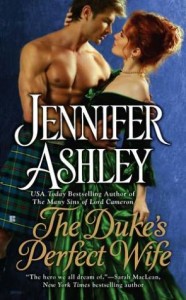 Their fortunes began a reversal when the youngest brother, the Mad MacKenzie, Ian found love with Beth.  If Hart is the head of the family, Ian is the heart and the glue that holds them together.  The two have a complicated relationship.  The MacKenzie series begins with The Madness of Lord Ian MacKenzie and it is in that book that we are introduced to Hart.  I have a feeling that if The Duke’s Perfect Wife is the introduction a reader has to the MacKenzie brothers, this book will generate a much different opinion.

Hart has built up a certain reputation in the past of having a dark sexual nature.  I was not able to separate what I learned about Hart in previous books with what appeared on the page in The Duke’s Perfect Wife.  Ultimately I felt like you wimped out on Hart, that I was promised to see a man whose bedroom tastes became a source of conflict for him and his beloved.  How would this be resolved. Unfortunately, how it was resolved was to make Hart out to only want to have control in the bedroom, much like he wanted control in every other aspect of his life.  This was a natural extension of Hart’s personality but again, not consistent with what we were previously told. (In one scene in The Madness of Lord Ian MacKenzie, we are told that Hart engaged in sexual asphyxiation, for example)

What new readers and followers of the series may have in common is attempting to understand the exact reason that Eleanor refused to marry Hart years ago and why she reverses her decision now.  While I believed in the deep love that both of the characters had for each other, Eleanor had jilted Hart over his treatment of women. It wasn’t that she was afraid of his sexual activities or that she was particularly upset that he kept a lover.  It was something else, something that led her to be frightened but I didn’t get it and because I didn’t get why she left, I wasn’t sure why she came back.

The setting is Victorian England and the political unrest of the time was used to great effect.  This was not a story you could have lifted out of its setting and have had the same result.  Hart’s quest to be prime minister and the conflict over the vote for the Irish Home Rule were integral to the plot arc.

If I take the book alone, without referencing the previous series, other than Eleanor’s thin and confusing reasons for leaving Hart (and she had good ones but it was asserted that she did not leave him for any of those good reasons), it is a strong romance.  Hart’s obsession with power is met with increasing resistance from supporters of the Irish Home Rule. Some radicals begin targeting Hart’s family with violence and Hart’s control over his life unspools.  Not helping is the reappearance of Eleanor, his first and only love.  Hart had proposed to Eleanor, the daughter of an impoverished but well respected Scottish nobleman, when she first came out.  They fell madly in love.  But Eleanor spurns Hart after a summer of engagement based on something.  Over the years, Hart has had other women and even married and lost a young son, but he has never been able to fully forget Eleanor.

As for Eleanor, Hart was her one true love but as a teenager, she could not have met power with power.  Hart was older than she and already a man.  Eleanor had not yet come into her own. In the intervening decade, Eleanor grows into her own person and when she returns to Hart, she does so fully able to counter his demands and exert her own will.  I really loved Eleanor.  She had a strong personality tempered by vulnerability.  She was capable without being foolish.  She was unafraid of what Hart perceived to be his demons.  Because Eleanor was so great, I was doubly disappointed at the watering down Hart’s sexual nature.  Eleanor was completely Hart’s equal and I wanted to see that challenge met inside the bedroom as well as outside.  In glossing over the history of Hart, I felt both Eleanor and I were cheated. B-

→ Jane
Previous article: Julie James and the Art of Interviewing
Next Post: REVIEW: Mariana by Susanna Kearsley (and giveaway)