REVIEW: The Duff by Kody Keplinger

Your book has been getting some of the biggest press I’ve seen for a YA title.  It’s very rare that I have people that read heavily in the romance community telling me to pick a YA title up.  The Duff, however, seems to be a title that captured many people’s attention.  In finally reading it,  the hype was brought back down to earth for me.  This is a smart title for the YA set that gets a lot of things right, but I didn’t leave it with the astounded feeling that I wanted to have. 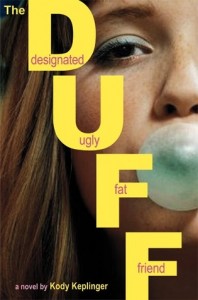 Of her group of friends, Bianca Piper knows she isn’t the prettiest.  The smartest, probably, but not the prettiest.  Some would even say she’s the DUFF.  The Designated Ugly Fat Friend.  Bianca doesn’t party like her friends.  She’s the girl who sits and chats with the bartender while her friends dance to Top 40 pop songs at an all ages club.  Bianca is the classic example of the DUFF.

DUFF or no, Bianca is smart.  It’s because of her intelligence that Bianca is able to see where other people go wrong.  Like boys.  Her friends may not understand it, but dating someone who’s simply hot and gigilo-ish like Wesley Rush isn’t what Bianca wants.  She has her eyes set on a better guy.  Someone who wants to go to an Ivy school and who likes politics.

Certainly not a man-whore who has dated and slept with a good portion of the high school girl population.  Wesley Rush infuriates Bianca to no end.  He stands for everything she dislikes.

It comes as a complete surprise when kissing him sparks something in her.  Bianca can’t stand him as a person, so why does kissing him feel so good?  The need to escape the stuff she experiences at home – a divorce and other parental problems – makes Wesley and his kisses all the more tempting.  Bianca strikes up an unusual deal with Wesley that isn’t the normal high school relationship.

Bianca and Wesley can have sex, but nothing else.  As far as Bianca’s concerned, she’s still really in like with another guy.  What she doesn’t realize is that her connection with Wesley is more than just in good sex, and when the time comes her choice between guys may not be so clear.

I really appreciate what The Duff stands for as a book.  For me, that is really what makes it such a recommended read.  There isn’t enough YA that combines a fun tone of voice with serious discussions on sex positivity.  The premise is well done enough to impress me, and that’s a good foot to start off on.

From the positive end of the spectrum, I enjoyed reading about Bianca.  She’s an unusual female narrator in the YA world.  She’s not afraid to be bitchy and cutting, and it’s not in the drama-filled sense.  Bianca swears and gets things out in the open with brutal honesty.  YA is home to a lot of quieter/subtler protagonists, so reading about someone like Bianca had me going through a sort of assimilation.  At first I found her to be quite the asshole, but as I read about her I realized that there was a lot more behind her than I first expected.

Bianca’s strength as a protagonist is  this growing amiability.  The more you read, the more you get invested in her character.  Family troubles and self-image issues easily lead her into the asshole territory at times, and it’s something the reader can understand.  It also gives due cause for her attachment to Wesley throughout the story.  You establish a strong basis for the overall plot via Bianca’s problems, and on that end she’s really strongly developed.

On the other hand, Bianca has moments that don’t speak well to her character at all.  Some of them can be said to be in every average teenager – moments of snark and bitchy bluntness.   The problem is that she fundamentally goes against traits that she establishes at other  moments in the story.  I’ve heard many claims that Bianca is a feminist character, and while I appreciate that she’s very sex-positive and all for the unconventional romantic relationship, I don’t feel like she lives up to the feminist label that’s been put on her by the reading community.  On the contrary, I felt that she was extremely negative in some places.

The opening scene takes place at an all ages club, and I was surprised to find that Bianca was criticizing her supposed friends and their dancing.

Once again, Casey and Jessica were making complete fools of themselves, shaking their asses like dancers in a rap video.

I think this just describes a bigger tonal problem I had throughout the novel.  While Bianca eventually learns her lesson about judging people and using connotations that revolve around a girl being loose, I don’t feel like it’s a lesson that’s really learned by her.  Throughout the book she is consistently and frequently cynical and cutting about the actions of the teenagers around her.  Her feminism is something that stems from just disliking what is considered the cultural norm for teenagers.  I’m not saying the cultural norm is devoid of problems, but I am saying that feminism in a character should not simply stem from her going against the grain in almost everything.

That was really my biggest problem with Bianca.  She is so intelligent in a teenager way in some moments, and then in others her attitude and mannerisms shift over towards a very adult connotation.  It gets to the point where she doesn’t have any fun with her friends and talks with the bartender.  She uses words and phrases that just feel really out of place for the teen canon in every day usage.  I’m friends with some very intelligent people, and even I found the mannerisms and attitudes to be really prudish and overblown at times.

Bianca’s relationship with Wesley is arguably the best point of the book.  I feel like this is where you really shine.  You portray a really complicated emotional relationship that stems from two teens with problems that knowingly use sex as a diversion.  It’s real.  It’s something people ignore.  But the reality is just so striking that one has to appreciate it.  Wesley is very rakish and barbed in his wit, and he easily wins his way into the reader’s heart.

The characterization issues did get in the way here as well.  The dialogue between Wesley and Bianca could easily go into contrived/wooden territory, and as the book went on some scenes felt very odd because of the word choice and cadence of the dialogue.  An out-of-character moment with a side character also occurs.  He acknowledges Bianca’s existence one time and then decides to tell her about his Ivy League acceptance letter first.  Such a huge moment felt really out of place when Bianca and this character didn’t exactly build up a strong relationship beforehand.

Despite the problems with characterization, I think The DUFF has a strong plotline.  You speak really well to teenage mannerisms in the way you use common swear words and sex.  You don’t shy away from the harder stuff, and readers like me really appreciate that in a novelist.  This book portrays the sexual relationships and parental relationships effectively, and it links them together in a way that I haven’t read in a YA novel before.  The sex-positivity is just such a huge win in that regard.

That being said, I feel like such a wonderful message and depth gets shallow in some spots of the book.  You have great ideas and threads connecting them, but they don’t slip into the story in such a way that they are just that – ideas and themes.  Instead, they feel like life lessons.  Ones that are far too blunt.  As the end nears you start to express a very obvious way of dealing with Bianca’s problems with her misconceptions of the school’s loose girl, and other issues that go on throughout the book.  It wasn’t enough to make me dislike the section, but it could have been handled better.

What ultimately made this book so hard to put down was your authorial voice.  Yes, I’ve found many critical problems in a reading that is admittedly quite critical due to the hype machine, but your voice is beyond what I expected.  It has moments of brilliance in its humor and its topic.  You have established yourself quite well from a debut novel, and that is something to be commended.  It’s easy to read The DUFF despite how much it deals with in reality, and that’s a really good thing.

The DUFF is not perfect by any means.  The over hype did give me some problems in reading it, as did the reader assessment of feminism in Bianca.  I also had problems with the way dialogue and situations were handled in an unbelievable manner periodically throughout the text.

Bianca and Wesley saved this book, though, and made me enjoy it despite the problems.  The DUFF portrays a complicated sexual relationship that is very frank for YA, but sends a really good message about teenage sex with its messages.  Your voice as a debut author won me over, and I will be looking forward to seeing how your writing progresses and matures over time.  B –