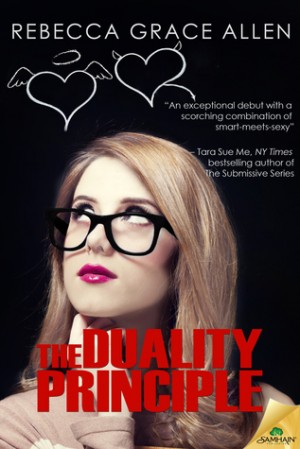 The Duality Principle: A principle that says if a theorem is true, it remains true if each object and operation is replaced by its dual.

I like geeks so much that I married one so my interest was piqued when I saw your book was about a geeky girl completing her PhD in Mathematics at MIT in Boston.  I am allergic to maths (*shudder*), so thankfully, there is little actual mathematics in the book.

Gabriella Evans is in Portland, Maine for the summer. She is staying at the house of her (now deceased) Nana – it will be her one last chance to do so, as her parents plan on selling it as soon as possible.  Gabby’s parents are high achievers and her mother in particular is fixated on appearances and Gabby has never felt she measured up.  She spent summers with her Nana in Maine and they are the fondest childhood memories she has.  Her Nana encouraged Gabby and was one of ther few people in her life who loved her “just the way she is”.   She also met Jamie, the outgoing and earthy girl next door and they become somewhat unlikely friends.

The novella begins when Gabby is on her way to a blind date, set up by her friend Jamie.  Gabby has little hope that the date will be a success.  She had a kinky side and whenever she’s let it out to play in the past, she has been rejected.  Her most recent boyfriend was a dud in bed –

Kevin was an engineering student, a promising husband in the making who also happened to need a detailed topographic map to find her clit.

– and to add a cherry to the crappy sundae, he disapproved of her sexually adventurous side.  Gabby has got to the point where she thinks she’ll just have to lock away her kinky nature, that no-one will accept all of her romantically.

Connor Starks is a boy from the wrong side of the tracks.  He spent a lot of his teen years in trouble with the law and having loads of sex with any girl who would put out.  It wasn’t until his grandparents (who raised him from the age of 15 when he was abandoned by his mother) gave him an ultimatum: “clean up your act or when you’re 18 you’re out of here” that he was finally motivated to change. He’s good with his hands and found work in an auto shop specialising in motorbikes and he stumbled into computer coding and web design.  Eventually he went to community college to get a degree and he now works as a programmer.  He wants to escape from the reputation which clings to him and when he meets Gabby, he’s trying hard to be the man he thinks she will want, rather than the man he is.

Both of them then, are trying to lock down aspects of themselves and present an… aspirational personality rather than their true selves.  Gabby is so unhappy with the duality of her own nature, she has decided to do her thesis on disproving the duality principle (which is maths, so naturally, I didn’t understand it).

Connor tries hard but his inner bad boy is very tempted by Gabby and Gabby’s inner kinky girl is drawn to all that Connor seeks to keep hidden.  There is an element of the big misunderstanding to the set up but I was able to go with it because a) it’s a novella and the miscommunications didn’t last too long and b) they each had good reason to feel and act the way they did.  Once they talk to one another honestly they are delightedly surprised to find that they both have dual natures which complement each other extremely well.  The only thing left to resolve romantically is what happens when the summer ends and Gabby goes back to MIT.  Is it true love or is it a fling?

The chemistry between Gabby and Connor is strong and they have a matching libidos and an affinity for semi-public sex.  When the sexytimes happen, they are creative and fun.

The story was just the right length – I didn’t think the plot could sustain a full novel but at about 110 pages, it felt like a good fit.  I enjoyed the humour of the story and the underlying message of acceptance.  The very beginning was a little clunky and there was a “mystery” which I felt was a little heavy-handed but it was a sexy fun short which amused and entertained.  I was tossing up between a C+ and a B- for the grade but I eventually settled on a B- mainly because of the charm of the main characters.