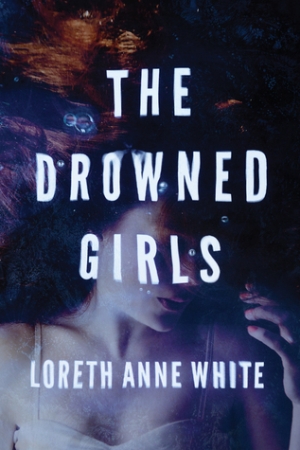 Trigger warning: graphic sexual and other violence – both in the book and in this review.

One of my reviewer friends raved to me about this book and I was curious enough to give it a try. My friend also reads mysteries and thrillers and isn’t exclusively a romance reader but she told me this crime thriller had romantic elements and a satisfying (HFN) ending so I thought it was something I could enjoy. I found it to be a little uneven at the start and the serial killer who was the (main) villain of the piece was a bit too grisly and gruesome for my preference but overall, the book did work for me.

The Drowned Girls is the first of the Angie Pallorino series – there’s another book coming out in November this year. I believe the series is only intended to be two books but I guess that could change in the future?

Canada-based Detective Angie Pallorino is a member of Victoria’s Metro Police Department, working in the Sex Crimes unit. Her ambition is to move to Homicide and she is actively trying to make this happen. Six months prior to the book’s beginning, Angie and her then partner Detective “Hash” Hashowsky were involved in a domestic violence attendance. The man had been sexually abusing his three year old daughter and had shot the child after a restraining order had failed to protect the toddler and her mother. Angie had been performing CPR on the little girl and while this was happening, the man shot and killed Hash, the mother of the toddler and then himself. Angie is likely suffering a degree of PTSD about those events. Even though Angie was cleared of any wrongdoing by an internal investigation, there is an element of the MVPD out to get her because Hash was very popular and if he died she must have done something wrong, right?

The only thing stopping Angie’s formal application to join Homicide is the department mandated psych-evaluation. Something she hasn’t yet been able to bring herself to do. (Even if she goes ahead and passes, that’s no guarantee she will get into Homicide – there’s only one position and lots of detectives want in. Also, Angie is not regarded as a team player and this is likely to count against her as well as the ongoing suspicion by other detectives in the MVPD about the events which led to the death of Hash.).

When the story begins, Angie and her dad have returned to his home after spending the day admitting Angie’s mother to a residential mental health facility. She had been suffering from schizophrenia for years and more recently had been diagnosed with dementia – her symptoms could not be controlled sufficiently for her to live at home safely anymore. Angie is distressed because she did not know until that day the length of time her mother had been symptomatic. Part of her distress is selfish (not a judgement); schizophrenia can have a genetic component and Angie is approaching the age where her mother first had symptoms. Angie herself is in some psychological distress and she’s frightened she might have schizophrenia too.

The opening (very short) chapter is from the perspective of “Jane Doe”, a victim of the serial killer Angie will try to catch over the course of the book. It was a very unusual way to open a book in my experience – perhaps it’s more common in crime thriller type books than romantic suspense? In any event, I found it a difficult way into the story.

The next chapter is from Angie’s third person (past tense) POV and this too I initially found somewhat clunky. There was a bit of info dump in there. I felt you wanted to let readers know about the thing with Hash and the toddler (in particular) dying and also that Angie has a visceral and negative reaction to snow and Christmas. The transitions didn’t really work for me here.

Since Hash’s death Angie has been engaging in somewhat risky sexual behaviour – going to a bar and picking up a stranger for no-strings sex. After the stress of the day, she heads to the bar again and this time she picks up a handsome, big, dark-haired man and takes him to a nearby motel which rents rooms by the hour. She’s a bit nervous about this guy because he rings an alarm bell within her – not of physical danger but of emotional risk. This is a guy she could like. Who could hurt her heart. But she has sex with him anyway.

Jane Doe is a young girl who has been brutally sexually assaulted, her genitalia (pre-mortem) was mutilated and a crucifix carved into her forehead. She was then mostly drowned in freshwater and then displayed in a cemetery at the feet of a statue of the Virgin Mary. I’m saying this here because the violence and the descriptions of what was done to the various victims is very graphic. I’ve toned it down a bit here by not describing the genital mutilation in detail but if this stuff is beyond a reader’s comfort zone here, then I don’t think the book will be for them. I must say, I’m becoming more sensitive to violence (particularly sexualised violence) as I get older and I found the killer’s sadistic predilections very disturbing. It meant that I had to take the book in small bites because it was a bit too much from time to time. Honestly, if I hadn’t committed to reviewing the book, the violence alone may have led me to put it down. It’s not a book for the faint-hearted.

“Jane Doe” is identified but succumbs to her injuries and the investigation then becomes a murder investigation. As Angie is in Sex Crimes, she is fearful the case will be taken away from her. Another body is located the next day and it is clear that Victoria has a serial killer on its hands. There were previous rape cases which bear striking resemblance to some of the killer’s MO and Angie is seconded to a task force. No prizes for guessing that the sergeant in charge of the task force is James Maddocks – the man from the hotel the other night.

As the case progresses, the sexual tension ramps up between Maddocks and Angie. I admit I found this a little incongruous in the beginning. It was more about my reaction to the graphic violence I think, but I found it difficult to move into “romantic” headspace from “cringing in the corner grisly serial killer” headspace.  However, I did end up buying into the romance and I did find it quite satisfying.

Angie begins to suffer from what she believes are hallucinations – which is exactly how her mother’s illness first manifested and she starts having strange possibly-memories which are incongruent with what she knows about her personal history.

All of this plays together as the investigation progresses. There is also political corruption, office/departmental politics, sexism and misogyny and an anonymous officer leaking information to the press. There are far more than one “bad guy” in this book but the serial killer is the worst of them. (Although there are a couple of candidates for close second.)

The back half of the book worked a lot better for me than the front. As the case progressed and as the relationship between Maddocks and Angie developed (not merely in the romance department, the professional relationship and friendship as well) the momentum built up and the last 50 pages or so were very tense indeed.

Ultimately I have mixed feelings about the book. It had a satisfying enough amount of romance but the nature of the violence was difficult for me to read. At first I noticed some “clunkiness” with info dumping but this reduced as the story progressed. Overall, I ended up thinking the book was a satisfying read but “enjoy” isn’t quite the word I’d use.

If a DA reader likes the kind of Thomas Harris kind of serial killer book with a healthy dash of romance however, it might be for them a very successful read.