By now the Lady Julia Grey series is well known among fans of historical mysteries. And it’s also had time for flaws to emerge from it. I doubt any long running series is immune from this. The initial bloom is off the rose so to speak. You also have to balance a continuing romance in with the mystery and that always opens up a new can of worms since new ways of maintaining the tension in the relationship must be found after a dueling pair get married. In “The Dark Enquiry,” I think you succeed in one sphere while stumbling in the other. 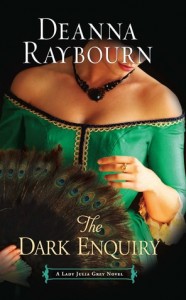 September, 1889. Lady Julia Brisbane and her fairly new husband Nicholas are returned to London from their latest adventure in India. It’s time to settle into married life post honeymoon. Nicholas has promised Julia a bigger role in his detecting if she can master the skills needed and she dives into this with gusto. She’s making progress even if she’s also irritating the landlady of their business quarters, and a few of the neighbors, with her less than successful forays into replicating self igniting gunpowder.

But even with Nicholas’s promise to include her in his business, Julia still feels the need to push his envelope. When she spies on Nicholas and sees her eldest brother emerging from the consulting rooms, Julia is hot on the trail of why Bellmont has professionally approached the brother-in-law he dislikes. What starts out as a simple blackmail case quickly balloons into something much worse – something that, if not stopped, could end up bringing down the entire government and tipping the balance of power in a Europe poised for war.

The last two books in the series had the problem of long separations between Julia and Brisbaine. This book fixes that and the two of them are center stage for much of the story. Once again, Julia is almost desperate to be included in Brisbane’s work and pushes far past the level of involvement that he thinks is safe for her. But I can see that this is her nature. She grew up in a large family that held few secrets from each other and which delights in getting in each other’s affairs. I don’t think she’s capable of just sitting at home and not trying to figure out the why of the cases Brisbaine gets hired to do. She’s also an aristocrat and honestly seems to think that, due to her status as such, nothing really bad could happen to her.

Nicholas, on the other hand, knows all to well and continues to grind down his back teeth in exasperation at the hijinks she gets into. But in this book, I truly see why Nicholas is so concerned and reluctant to include her. He grew up without much either materially or emotionally and in Julia has found the woman he loves almost to distraction. When he tells her that he loves her above all else it’s almost as if it has to be dragged out of him and this makes me believe it more than pages of flowery declarations of undying devotion. He isn’t just stubbornly putting her off, he’s trying to protect her.

Here I think their relationship truly advances – once they’ve butted heads a bit – as they talk and open up about why she feels the need to keep pushing and why he can’t help but want to swaddle her from all hurts. They’re still going to have problems about this issue but at least they’re dialoguing about it and not at such cross purposes.

So, on to the mystery part of the book. The basic premise here is fantastic and something that I can easily see happening. What is it about politicians and sex? Every time a new scandal emerges I can’t help but think, “Do these idjuts not pay any damn attention to the others who have – pardon the pun – fucked up with their peckers?” Since it has kept happening for centuries, I guess the answer to that is “No.” But while the basis for Brisbane and Julia’s investigation is age old and totally believable, the resolution of the case here leaves me cold. One thing I hate in a mystery is when the villain is out of the blue and totally from left field. Authors don’t have to drop BIG OBVIOUS CLUES throughout the book but some hints that might allow me to work out the villain’s identity is appreciated. When the reveal occurs and my first thought is “where the hell did that come from?!” I get pissed.

Here everything hinges on one piece of information that Julia conveniently forgets until a gun is being brandished in her face. Oh yeah, that clue! This is augmented by a couple of “let me spell out my complete involvement in this case” scenes wherein various people suddenly and happily quote chapter and verse to Julia and Brisbane about all they know regarding the case. Let’s hear it for deus ex machinas solving everything.

There’s also one last thing that I didn’t see the need for. When the villain is overcome, something happens to Julia which is another “where did this come from” issue. Since nothing is even hinted about it until that moment, I have no emotional investment at all and when it is seemingly just as quickly moved past, I have to wonder why include this at all? To me, this is a pretty major deal to be tacked on and then rushed over.

I finished the book conflicted about the grade. On the one hand, the relationship between Julia and Brisbane is delved into and focused on much more than in past books. Everything still isn’t rosy and smooth sailing, which I see the need for as the series will continue – on to Rome next – but at least the two of them are physically together more and talking. Julia also shows Brisbane that she’s learning to reason out a case and not just plunge into it. But the resolution of this case sideswiped me in more ways than one and that does not make me happy. End balance? a B-

→ Jayne
Previous article: REVIEW: The Amorous Education of Celia Seaton by Miranda Neville
Next Post: REVIEW: The Rites and Wrongs of Janice Wills by Joanna Pearson