I was a big fan of your Gardella Vampire Chronicles. While your other novels, including those written under other pen names, haven’t worked as well for me, I’m still willing to give a new project of yours a try. When Jane sent me this, I was skeptical but game. 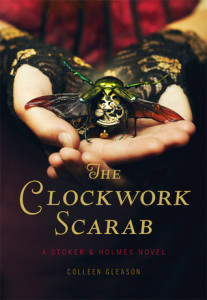 The Clockwork Scarab relies on a fairly absurd premise. It’s one of those that will either make readers laugh or make grabby hands. The suspension of disbelief required is pretty high: Sherlock Holmes’s niece and Bram Stoker’s sister work as a team under Irene Adler to investigate the deaths of young women in Victorian England. See what I mean?

I normally don’t like these sorts of mash-ups but apparently I was in a receptive mood. Much to my surprise, I enjoyed it despite being quite aware of how silly the whole thing was. Maybe it was because I was in the mood for something featuring multiple female main characters and The Clockwork Scarab definitely gives us that.

Mina, the niece of Sherlock Holmes, is brilliant and observant but awkward and not at all comfortable maneuvering proper London society. This is further compounded by being abandoned by her mother, who’s run off to Paris, and a father who’s present but long since checked out. Evaline, the sister of Bram Stoker, is the pretty ingénue but in reality, is a vampire hunter. To readers thinking this sounds familiar, there’s a reason for that: Evaline is Victoria Gardella’s descendant. Yes, this in-universe wink-wink tie-in can be trite and cutesy but given the premise of the book, I think it’s a little too late to quibble and throw stones. What I found interesting about Evaline, however, is that she’s a thwarted vampire hunter. There are few vampires left running around, leaving her with all this strength and speed and no way to apply it. The one time she does come face to face with one, she freezes and that failure haunts and drives her throughout the novel.

It was pretty refreshing to read a novel about female partners. I mean, I usually read fantasy and am drowning in a sea of male partners going on adventures. It’s nice to read about female partners doing the same once in a while. (I’d actually like it if this could be more than once in a while though.) Mina and Evaline don’t get along when they first meet and it takes them the majority of the novel to trust each other. What I liked about their interpersonal conflict is that it’s all personality based. Both are used to being outsiders and working alone. They have no idea how to work with one another. Mina is very cerebral and a careful planner whereas Evaline is a fighter and lives on instinct. These are two very different approaches and it causes many mishaps in their investigation. I also liked that they were mutually intimidated by each other. How often do you see female characters jealous over other female characters’ skills?

While there were multiple love interests set up for each girl (but none of whom overlap so there will no “fighting over the same boy” shenanigans, thank goodness!), the potential romances remain low-key. The mystery and their investigation very much remain at the forefront. The girls have an objective and while they may get momentarily distracted, they never take their eyes off the prize.

The downside of this focus, unfortunately, is that the mystery never gets resolved. The girls’ deaths are linked to an underground organization devoted to the Egyptian goddess, Sekhmet. It’s purportedly a radical (for the time) women’s lib organization interested in letting escape the shackles of marriage and the like. What never quite made sense to me was how this goal would be accomplished by resurrecting an Egyptian goddess in Victorian England.

There’s also a random time traveler. I have no idea what purpose he serves. Other than being a love interest, of course. I don’t even have a clue about how time travel fits into all this. It’s somehow tied in the Sekhmet cult but since that mystery is never completely solved, I got nothing. Dylan never fit into the story so whenever he showed up on page, I found it jarring.

The Clockwork Scarab is the first of a series and it suffers from the same unresolved conflict issues that plagued many other YA series. We never learn what the Sekhmet cult was all about. We never learn how or why Dylan travelled through time into a weird alternate past. But because of the female leads and their interactions with one another, I’m willing to stay on the ride for at least one other book. B-