REVIEW: The Chosen and the Beautiful by Nghi Vo 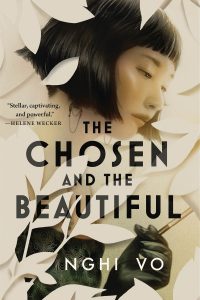 Jordan Baker grows up in the most rarefied circles of 1920s American society—she has money, education, a killer golf handicap, and invitations to some of the most exclusive parties of the Jazz Age. She’s also queer and Asian, a Vietnamese adoptee treated as an exotic attraction by her peers, while the most important doors remain closed to her.

But the world is full of wonders: infernal pacts and dazzling illusions, lost ghosts and elemental mysteries. In all paper is fire, and Jordan can burn the cut paper heart out of a man. She just has to learn how.

First let me confess that I’ve never read “The Great Gatsby” and have only managed to force myself to watch bits and pieces of the 1974 movie. Frankly, the plot and characters never interested me. When I saw this arc on offer with your name attached, I jumped at the description of it before realizing that it would be a retelling of the story. Still based on my love for “The Singing Hills Cycle” novellas, I was psyched to give it a try.

After a while, I thought I ought to skim through “Gatsby” to read the scenes with the original “Jordan” in them. That is when I saw how carefully and skillfully bits of dialog and action had been snipped out of it and used as the basis of this Jordan and this reimagined world. Here the book is told from the POV of Jordan Baker, a queer, adopted Vietnamese orphan who was brought back from “Tonkin” as a small child by the missionary daughter of the wealthy Baker family of Louisville. Though it’s never made clear (and I wish it had been), over the course of the book, there were vague hints that this was all more havey cavey than totally altruistic as Jordan had been brought up to believe.

“The Chosen and the Beautiful” who were “dripping with money and magic” (Jordan’s description of the socialites with whom she was raised and with whom she runs wild) have sorta of accepted Jordan but as she gets older, she finds that some doors aren’t as open to her as they once were while others are closed altogether. Daisy Fay has, in and out, been a part of Jordan’s life for years. Now they’re all at NYC nightclubs and speakeasies as well as fabulous Long Island estates. Two people join Daisy, her husband Tom, and Jordan that summer – one who is distantly related to Daisy and one who has loved her obsessively for five years.

The change in narrator allows some scenes to be viewed from another angle while expanding on ones that were mentioned in but not actually a part of “Gatsby.” And then there are the queer and magical aspects that are totally new. These actually turned out to be my favorite parts. In one scene, Jordan visits the Cendrillon club which is a LGBTQIA haven in NYC. I so wanted to spend more time there or revisit it again. A degree of magic cloaks it in plain view and the habitués who frequent it are more interesting to me than selfish Daisy. A few other characters also flirt with lgbtqia kisses and sex during the course of the book.

Beyond hiding the Cendrillon, magic drifts over and peeks through several parts of the plot. Jordan shows early on that she has a talent for paper cutting – creating living things from intricately snipped (using that word again) card stock. Once, as children, she entertains Daisy with a lion and once, as adults, she saves Daisy’s bridal dinner when Daisy drinks herself too blotto to attend. Jordan can also see ghosts – something that is enhanced after drinking some of the demoniac that Gatsby manages to smuggle into the country. Darker magic and forces are in play to account for Gatsby’s rise in fortune giving his outrageous parties a new and disturbing quality.

Yet there were times when I almost forgot that magic was even in this story causing me to startle slightly when it appears again. I felt the magic aspects needed more in depth explanation. Some were one-offs such as Daisy and Jordan floating through the house at East Egg while other things, like how Gatsby got his wealth, are mentioned more at length though not in detail. But the two different types of magic weren’t meshed together at all which seemed clunky to me.

What I did like was that Jordan appeared to be much the same character as she was in “Gatsby” even though some of the motivations behind her actions were different. She was still cynical and skeptical while also shielding her emotions but it was due to her outsider status as an immigrant as well as her bisexuality. As an immigrant, she was also worried about the possible changes to American immigration policy (labeled here as the Manchester Act). A few scenes include other Asian characters with whom Jordan briefly mixes and whom she might see in the future after the tragic events that end the story. This allowed her to ponder how the world viewed her solo or when grouped with others who weren’t the white elite.

The writing is lush and eventually allowed me to sink into this world which moved at a much slower pace then we live now. These are definitely the 1% enjoying their fantastic wealth and privilege whether it’s inherited or gained from black arts. While it’s told from a different POV, the plot is basically the same and as I mentioned earlier and some of the dialog is reused. Since I haven’t read all of “Gatsby” this didn’t bother me but fans of the book might either love it or hate it.

As with the writing of the Singing Hills novellas, what is here is atmospheric and beautiful. I sweltered in the oppressive heat, felt the swish of the gorgeous beaded flapper dresses, and saw the dark, ominous clouds rolling in. The descriptions are evocative without being overwrought (OMG – the dresses!) and I felt that the style managed to slip seamlessly into the original. The LGBTQIA elements are casually yet effectively added but the magic, though fascinating, needed work. I enjoyed this book but not as much as I wanted. B-

→ Jayne
Previous article: REVIEW: A Lady in Attendance by Rachel Fordham
Next Post: What Janine is Reading: A Contemporary Fantasy and a Harlequin Historical