REVIEW: The Chase by Erin McCarthy

I have a feeling that this might not be the favorite book in the stock car racing series and I am going to blame it on Kendall, the heroine.   She is a woman racing in a man’s sport and she feels her minority status keenly.   Kendall Holbrook is the only female stock car racer and she is a member of the 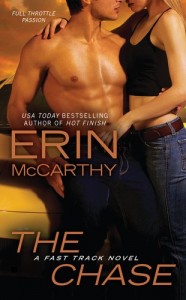 Kendall’s career is on the upswing. She was pulled out of truck racing and into stock car racing (you are careful not to call it NASCAR even though everyone and their cousin does). She’s got a huge sponsor and she is all anyone in the sporting news seems to want to talk to and about. Evan Monroe’s career is moving in the exact opposite direction. He just lost a sponsor worth a half a million a race. His driving sucks. What’s worse is that Evan and Kendall were a hairsbreadth away from being a forever after couple ten years ago and these days she can’t spare him a glance.

I don’t recall many romance stories featuring a woman whose career is more successful than that of the hero’s, particularly if they are in the same industry. I guess it is considered emasculating and therefore not heroic? I haven’t fully thought this one out yet, but when I was reading The Chase, I felt like there was a different dynamic going on. Evan has to come to grips with what he wants to do with his life. Can he be a better driver? Can he deal with the woman in his life having more success than he is having at the very same career? Evan already has to grapple with being the lesser team member as compared to his brother, Elec. And with Elec married to a racing legend’s widow, Evan comes up short in measurement in all areas–personally and professionally.

Like Evan, Kendall is struggling both personally and professionally. Their character arcs mirror each other in many ways (which I always like because it’s the same arc told two different ways in the same book). Kendall hates the publicity that she has to go through to be a driver on the circuit and she has to play up to the cameras because until she starts winning, she has to justify her presence to the sponsors. Kendall is very insecure. Her family isn’t a racing family and they don’t necessarily approve of it. Kendall’s always been trying to gain her father’s approval and initially he was supportive when it was just a fun thing but when Kendall’s racing became serious, his support was withdrawn.

Kendall and Evan’s break up happened ten years ago because they were both immature. What I liked and appreciated was that all parties acknowledged it was immature and were called on it so that we, as readers, aren’t saying these characters are still stupid 10 years later.

"Okay, awkward alert," he told Tuesday in a low voice. "Kendall just showed up and she's seen us. It's too late to make a run for it."

"Why would we make a run for it? I'm the one who invited her."

Evan stared at her. "You invited your friend to join you on your date with her ex-boyfriend? That's fucked up."

"You and Kendall clearly need to talk and clear the air. You're both dragging around ten-year-old baggage and that's just stupid." She gave a cheerful wave to Kendall.

Things I loved about this book include the bromance (which is a term I use inaccurately to describe jocularity between the male characters). I.e., this exchange between Ryder Jefferson and Evan as Ryder tries to offer a hand to Evan:

"Didn't you used to date Kendall?" Ryder asked casually, tossing his helmet in his hands.

Was nothing a goddamn secret in this town? Everyone was always in everyone else's business, and Evan was tired of it. "For about a minute a hundred years ago."

"You still have any feelings for her?"

Evan lost patience with the conversation. He did not have feelings for that woman, other than a lingering annoyance that she'd been such a total wimp about breaking up with him. The least she could have done was have the decency to tell him what he'd done wrong.
"What the hell is this, Dr. Phil? You get married and suddenly you want to talk about feelings? I don't have any feelings."

Ryder laughed. "For a guy who doesn't have feelings you sound pretty riled up. Hey, I'm just offering an ear, man. And since I'm a guy who knows a thing or two about taking a second chance on a relationship, I figured I'd throw it out there that I'm around if you want to talk."

What he was feeling was damned uncomfortable with the direction of this conversation. "Thanks, but I'm good. But I'll call you if I need someone to go get a mani/pedi with."

and the girlmance (is there a better term for this):

"He has no clue why you broke up. It bothers him, it's obvious. Give him an explanation and an apology and give him the opportunity to apologize to you. It's time to move on. You said it yourself, you were eighteen, and you were clearly insecure. Hey, I get that, it's normal at that age to have doubts. But you're twenty-eight now and it's time to deal with the past so you can tackle the future."

"When did you become my therapist?"

"A friend is by definition an unpaid therapist. Trust me, both of you will thank me and sleep a lot better at night. This is called closure."

"Don't make me bring him to your apartment."

My complaints regarding this book are two fold.   First, I thought Kendall had farther to go in terms of character growth and instead of stretching her, I felt that Evan got to make the big bold moves toward the end that endeared him to the readership and left Kendall looking more heartless and immature than she deserved.   I would have liked to have seen Kendall make the big gesture because it would have been more fitting with where she needed to go emotionally to end up in a good relationship with Evan.   I also didn’t feel like I went far enough with Evan.   In other words, his acceptance of his racing career and his place in the world seemed to easy in the end. I got that Evan easy to please and more fatalistic than Kendall and much less driven, but I still wondered at the ease of his recovery.

But I cannot discount that this is a fun, sexy, straight contemporary where we get to concentrate on the characters with few distractions.   I appreciated the plot twist that you threw in there in the end.   It did not seem out of place, as other reviewers have commented, because I think it highlighted Kendall’s basic insecurities and Evan’s growth as a man (I know, this sounds a little contradictory to the above paragraph). B-