Is Tessa always to be overshadowed?

Tessa Morley has spent her entire life in the shadow of her beautiful and bewitching twin sister Tania. Unlike Tania, whose vivacious beauty and outgoing personality have ensured that she is forever in the limelight, Tessa lacks her sister’s confidence and has always been exceedingly shy. Although blessed with the voice of an angel, and musical talent that far surpasses that of her twin, Tessa has never been given the same kind of chances as her sister because she happened to be born lame.

With the dream of a stage career out of reach, Tessa has taken work as a secretary for Quentin Otway, the arrogant and temperamental artistic director for the Northern Counties Festival who, along with famous conductor Oscar Warrender, is responsible for the gathering of significant musical talent for the festival. Tania, determined to be cast in the festival’s production of Cosi fan tutte, convinces Tessa to ask Otway for an audition — and without warning Tessa finds herself having to deny her one great talent…her voice.

As upsetting as the situation is, Tessa is willing to bear the hurt for the sake of her sister, whom she loves dearly, but then it seems Tania will even rob Tessa of the man she loves. Her only consolation comes in the form of Oscar Warrender, whose keen ear identifies Tessa’s skill and who insists that for the first time in her life Tessa must take centre stage.

Will Otway see Tessa for who she really is? Or is she doomed forever to be overshadowed by her sister?

Those of you who know the plot might wince at the violin playing woman on the current cover. No, it’s not as good as some of the other covers for this book but I submit that this is still better than the cover with a brunette heroine gaily playing a cello and the rictus grinning hero backing her up on the Steinway.

It definitely has air of earlier time when women could find fulfillment in being efficient secretaries to great men. But then Tessa’s disparaging family hasn’t exactly conditioned her to expect adulation in the face of her beautiful, vivacious twin sister. A few kind words from her stressed and overworked boss and Tessa would fly to the moon for him. Quentin Ortway is the type to flare into the office then fling himself into a chair all dazzling and energetic.

Tessa isn’t unaware of her limp – her deformity, as if she’s a second from a china factory where perfection is the rule – though she mainly gamely gets on with things. But she does occasionally find it hard to play second fiddle to her physically perfect sister and people would have been astounded at the frustration that sometimes seethed beneath her calm façade. Sister Tania is the brilliant bird of paradise while Tessa is the brown wren. I feel a twinge of uneasiness at Quentin’s ever so slight distaste for things which aren’t perfect as in the form of his damaged renaissance carved wooden angel. Of course the comparative symbolism to Tessa immediately springs to mind. 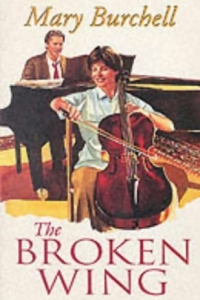 Tessa does have one thing going for her: a pure, beautiful voice which (with typical English understatement) a former music teacher deemed “worthy of some really good training.” Her beautiful and somewhat vapid mother might wonder at Tessa wasting her time when she’ll never have a stage career (because of the limp) and at something that would be hard work but it just shows how little her mother understands her daughter. The lessons remain Tessa’s thrilling indulgence – as she takes over paying for them once she’s earning her own money.

Conflict between the sisters soon emerges as determined Tania insists on Tessa introducing her to her boss – the dark and dangerous Quentin of the flashing eyes and fast reputation.

Burchell has that wonderful way of describing things with little adjective touches which give exact mental thumbnail sketches. Not just people but their emotions, thoughts, attitudes – well everything. And she did it without overdoing it. Tania nails it, though she couldn’t possibly know that she does, when she remarks to Tessa how handsome Quentin is and asks, “How do you manage not to be in love with him?” Duh, of course Tessa is.

The set up for the majority of the book is masterfully done. Tessa simply has to allow Tania her little subterfuges and stretching – no, make that ripping and shredding – of the truth about how Tessa can sing like an angel while Tania is grasping for the opera part, like a drowning woman going down for the third time who’s thrown a rope, and willing to sweetly push her sister under a bus to get it. Tessa seethes some more but short of ratting her sister out, what can she do? Me, I wanted Tessa to rat away until the cows came ambling home. Oooh, that Tania …

Tessa can get a little testy about things and I enjoyed watching her feelings peeking out from under her attempt at a cool exterior. Her passionate protest of Quentin’s casual dismissal of the wooden angel finally gave the lunk-head pause. For someone who is supposed to be so finely attuned to artistic temperament he can be amazingly obtuse. Now Mrs. Hurley, I like her. Quentin’s grandmother is a Force of Nature. Before meeting her though, Tessa is scared spitless by a meeting with the great Oscar Warrender – and now that we’ve all read “A Song Begins,” we know who he is. It is during a drive from the train station that she gets a first-hand introduction to his powers of observation and keen intelligence. Not much gets by Oscar. ::Queue dramatic music::

I’m not sure whether to mark this down to the 60s time frame when the book was written or to Burchell making sure Tessa comes off as insecure around men but wow does Tessa come off as insecure around men. Trembling before the Great Oscar Warrender who instills fear in the hearts of all performers I can accept but Tessa’s boss plays her a bit and says some waspishly cruel things – at least initially. It is lovely to see the continuance of Anthea Warrender’s story and get a glimpse of her new life in music and as the beloved wife of said imposing conductor. Oscar may not suffer fools but he does adore his wife even as he makes her practice, practice, practice. He also takes a surprising turn at romance in his advice to Tessa – even if it is given dryly and with the utmost cynical knowledge of how the hero works and what will work on him. 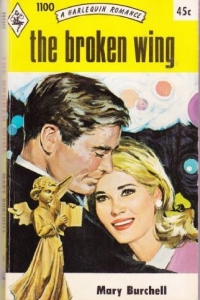 I’m liking Quen’s gran more and more. She’s a tough old bird and has lots of wisdom and hard won experience to lavish upon those whom she chooses – luckily Tessa is one. She must be taken on her own terms and yes, she does utter some waspy things herself – though in defense of Quentin.

The aura and excitement of the theater life is wonderfully portrayed but then Burchell knew that world well. As she did the secretarial one which Tessa is given. We also see the arrogance, cattiness, single-minded determination and ruthless ambition that this world germinates. Plus Tessa and Quentin scratch and claw each other from their painful emotions and misunderstandings.

I’m a little troubled by the inference – from several characters – that Quentin adores and is drawn to perfection and that once Tessa has wowed the crowds with her singing, he’ll be at her feet. Then yikes! something happens I wasn’t quite expecting. Though it does makes sense to avoid what was done in “Song” I was so invested in the situation that I wanted to wail and snarl. Then the era-centered gender dynamics come into play, as Sunita mentioned, and all I could do is think, “yeah, that was then and not now and don’t judge too harshly.”

The characterization is marvelous, the view of the life of the theater and performers is stupendous, in the end a HEA is achieved and the heroine and hero do appear to be supremely happy but oh, my the Big Mis, the self-effacing heroine who truly seems to think she deserves so little, the family who ignore her or blithely dismiss her, the hero who can be a “shoot him now, please” shit at times, and the “out of nowhere” declarations of love coming in at the last second – GAH! I wanted to scream at times but I also was glued to my ereader to see What Happened Next. It’s very hard to grade this one. Parts are an A and parts make me want to pull my hair out. I don’t think we have a “pull my hair out” grading so I’ll go with a mixed bag B-

→ Jayne
Previous article: What Janine is Reading (and Seeing at the Theater) in Late 2016
Next Post: Open Thread for Readers for February 2017