Your debut initially piqued my interest when I read the premise: a teenage girl with the ability to sense death gets tangled up with a serial killer. For all my purported weariness with the urban fantasy genre and its related subsets, I can’t seem to stay away because I love the paranormal and all things fantasy. I admit it’s not the most original concept but as with many things, it’s all in the execution. An added element is all that’s needed to elevate something from merely good to great. For me, that was the relationship of the heroine with her male best friend and the promise of a childhood friends turned lovers trope, which remains a surefire favorite of mine. 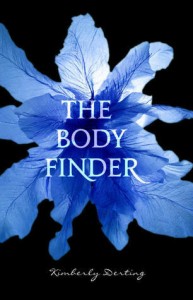 For as long as she can remember, Violet Ambrose has been able to sense death. This means primarily two things: finding dead bodies and being able to tell if someone has taken a life. Obviously, neither hospitals nor cemeteries are her favorite places. Violet’s ability manifests in any number of sensory cues, including: visual distortions like bright colors or oily films, bells ringing, or bitter tastes on her tongue. When she was little, her ability was mostly confined to finding dead animals. That changed one day when she found a dead girl buried in a forest.

Now Violet is a teenager, coping with the every day concerns of being in high school and struggling with her growing feelings for her best friend, Jay, who’s experiencing a sudden burst of popularity due to “suddenly” becoming hot. Nothing out of the ordinary but given Violet’s special ability, we know that can’t stay the case for long. Soon girls start disappearing and turning up dead. Violet has the unfortunate luck of finding the first corpse at the last lake party of the summer. And as the victims start hitting closer to home with each disappearance, Violet finds that staying uninvolved and denying her ability is no longer an option.

It took me a couple chapters to get hooked but once I did, it was hard for me to put the book down. I chose this book for the premise but I’ll be honest. The relationship between Violet and Jay is why I stayed. Violet’s struggle with taking the chance to jump from friend to something more was really honest and heartfelt. The steadfast denial of her true feelings, even though it was obvious to everyone except for the object of her affections, is something many people will be familiar with. I also really empathized with her bafflement over what to do when her best friend suddenly becomes the most wanted boy in school and what that means for their very close friendship.

Another thing I enjoyed was Violet’s frustration over all the adults in their lives viewing their relationship as being platonic with no chance of anything more — the scene in which she gets angry because her parents are completely fine with Jay being in her room with the door shut when that certainly wouldn’t be the case with any other boy made me smile. Overall, I really thought the romantic aspect was well done and I believe any reader who’s a fan of this particular trope will like this book a great deal because it’s very well-done.

Bonus points for Violet having a family that’s present, supportive, and not dysfunctional! This shouldn’t be so extraordinary that I feel the need to comment on it but coming from a fantasy reading background, I’ve had more than my fair share of dead or non-present parents in a protagonist’s backstory. To have parents not only be present but be aware of Violet’s abilities? And be at turns supportive and protective of her because of it? Miraculous. In addition, we got to see Jay’s mother and Violet’s aunt, uncle and cousins. It was nice to see a character have normal, healthy relatiionships with both immediate and extended family.

One thing I wasn’t so keen on were the brief passages from the villain’s point of view. I really don’t know why this is such a popular method used in thriller-type books. They never add suspense to my reading experience and instead often conjure the mental image of a villain caricature who’s twirling his mustache and flinging his cape over a shoulder. I don’t know about other readers, but that doesn’t keep me on the edge of my seat.

There was also a (thankfully very brief) scene towards the end of the book with a very off-putting incident of homophobia and biphobia. It was so out of place from the rest of the book that I couldn’t even understand why it was included in the first place. It’s not important to the plot. It didn’t add anything to the characterization other than making me think Violet’s flighty friend is now a homophobic jerk. I don’t know if it was meant to be “realistic” or what, but it struck me as unnecessary. Given that this is a young adult novel, in which a portion of the target audience is coming to terms with their sexual identity (in this case, specifically bisexual girls), I really felt that this however-brief scene should be mentioned with a cautionary note because it does come out of left field.

But other than that bit of unpleasantness, I did enjoy the The Body Finder. I don’t think the mystery-thriller part is particularly that outstanding but it was functional enough to hold together. I think the main reason to read the book is the changing relationship between Violet and Jay, which was lovely and well-done. Everything else was sidelined for me. B-