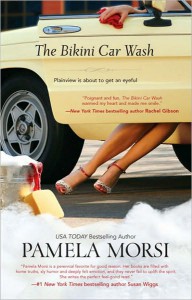 I, for one, am glad that your husband sat you down in front of a typewriter all those years ago and urged you – in so many words – to write that novel that you wanted to. My reading would be the poorer if he hadn’t. “The Bikini Car Wash” is a book which is not quite the straight romances you used to write but has more romance than the usual fiction book.

Andrea, Andi, Walkowicz knew she was taking a risk by leaving her good job in Chicago but when her mother unexpectedly died, someone had to come home to help her father with Angela. Or so Andi thought. But Walt Walkowicz and Andi’s mentally impaired sister seem to be doing just fine delivering Meals on Wheels. Now Andi’s been pounding the pavement for months looking for any work in this small community of Plainview but with little luck.

Her latest rejection comes from Guthrie Foods, owned by the wealthy Guthrie family for four generations. Pete Guthrie runs it now. Pete the same person whom Andi still has some simmering resentments about left over from high school – and no, she’s not proud of that but that’s life. With few other options, Andi decides to turn her father’s closed car wash into another business. She would have thought the other downtown merchants would be delighted to see a shuttered business come back to life so she doesn’t take it well when Pete’s retired father, who’s now on the town council, stymies her efforts to turn the place into a drive through coffee shop.

Well, since she can’t get permission to change the business and her father can’t find a buyer for the property, Andi’s only other option is to reopen it. But she needs a gimmick and finds it from an unlikely source: two other out of work young women who also desperately need money. Together they decide to wash, buff and wax cars the old fashioned way… but in bikinis. Soon the town is in an uproar over the new business and Andi finds an unlikely friend in her corner. Could she have been wrong about Pete all those years ago?

Though I wouldn’t call this women’s fiction, it’s definitely more than about a romance between Pete and Andi. Both of them have to find out who the other person really is rather than merely relying on their old memories of each other as the town golden boy or the athletic math geek. Andi also needs to, as you say, “figure out her own life.” I like that after some initial reserve, they quickly form a friendship after a night of passion. But I’m also glad that they step on the brakes after that initial night rather than just jumping into true lurve.

And they’re actually a much closer fit than a lot of people might think. Both love running a business, both have had people assuming things about them rather than discovering who the real Andi and Pete truly are, and both have issues to deal with from their parents’ marriages. But they also laugh together and never run out of things to talk about with each other. They support each other but not blindly. They’re there for each other in the other’s moments of need. And the sex is great too. I like that Pete falls in love with the woman behind the bikini while Andi soon comes to see past Pete’s status in this small town.

Both Pete and Andi develop over the course of the book and this centers a lot on the other people in their lives. Pete has clashed with his domineering father for years over how Pete runs the store. He’s learned how to ignore his father’s bullying but when Hank Guthrie goes after Andi’s business, Pete finally hands Hank some public set downs. Andi thought she knew her parent’s marriage but discovers some things which shock her and rock her world. She has to reexamine what she knew and accept what truly was and is. I like that neither Pete nor Andi are perfect and both have their moments of jealousy, pay back and resentment. But they emerge stronger and seem ready to take their relationship to the next level.

At first I wasn’t sure why Jelly, who seems to serve as the ‘wise old grandmother/neighbor who says whatever is on her mind’ role, is written as mentally retarded. It wasn’t until I read some of your blog that I realized how RL she and Walt probably are. She’s not presented as “poor Jelly” or “brave Jelly” or “see how well Jelly copes with life” – thank you. Instead you show her matter of factly and without anyone stepping onto a soapbox about her. I found it hard to believe that Walt and his dead wife were so saintly over the years about all they had to be saintly over. But after reading your tribute to your father, it seems like Walt is probably based on RL too.

There’s more to this story than just a gimmick about women wearing bikinis – as the town of Plainview discovers. Though I do mourn the fact that you no longer write the historical romances I first loved from you, I’m no longer afraid of reading your second style of book. Some people I will follow away from traditional romances and you are one of them.

→ Jayne
Previous article: REVIEW: The Search by Nora Roberts
Next Post: REVIEW: Crocodile on the Sandbank by Elizabeth Peters