REVIEW: The Best Man in Texas by Tanya Michaels 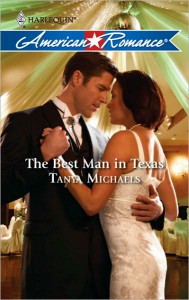 I admit to being a little leery when I picked this book out to read. The story begins with the heroine engaged to a man not the hero. To make matters worse, the hero and the fiance are best friends. On the one hand this meant the fiance wouldn’t be demonized but on the other, there are a whole host of issues from what kind of person falls in and out of love and back in again in the course of a short novel to the kind of fall out between the hero and his best friend.

Brooke Nichols grew up in an unstable household.   Her parents were prone to dramatic displays of emotion.   Her sister flits from one interest to another (in this book she has decided she wants to be a private investigator).   When she met Gifford Baker, he exuded characteristics which she had always longed for: strong connections with his family, stability, dependability, decency. That he was handsome and wealthy made it easy for Brooke to say yes when Giff asked her to marry him after dating for two months.

Only Giff’s best friend dares to challenge this match. Initially Jake, who had been away during the time Giff was dating Brooke, questions Giff in a really awkward scene. Giff brings Jake to a restaurant to meet Brooke and Brooke goes to the restroom. Jake takes the opportunity to ask Giff if he really knows what he is doing. Unfortunately, Brooke is back before Jake’s inquisition starts. Brooke tries to laugh it off “I”m sure we’ll look back on this moment and laugh.” Giff gamely jumps in “Say, on our fiftieth wedding anniversary, when we’ve show Jake how needless his worrying was.”

What worked here was that Jake is not instantly attracted to Brooke, and that Brooke, while recognizing what a hunk Jake is (Mr. July in the calendar), is as unethused about Jake.

But Jake is as close to Giff as a brother and Brooke is Giff’s fiance and so Giff asks both of them to make an effort to get to know each other. Giff is busy with his job and suggests that Jake take Brooke to a concert. Jake does and begins to get to know Brooke. The more that he sees of Brooke, the more convinced he is that Brooke isn’t in love with Giff and that she isn’t the right person for Giff. What sucks is that Jake starts to think that Brooke is the right person for him.

Brooke is at first angered and then hurt when confronted with Jake’s suggestions that perhaps what she is seeking from Giff is safety rather than love. Jake’s suggestion that this isn’t fair to either Giff or Brooke hits home. Has all she been doing in life is taking the path of least resistance, not actually living, for fear of ending up with a life of turmoil like her parents.

Jake is the straight man to Brooke’s uncertain character. He has little character growth, but instead provides the contrast for Brooke. Brooke has only seen how impulsivity leads to ostracization. More than anything she has wanted to fit it and belong. Jake shows that there can be a balance between taking chances and being out of control.

These characters seemed vivid to me. I could imagine them living next door and telling me their love story over cocktails. It was realistic and ordinary yet emotional. Importantly there was no cheating, not even emotionally I felt, even though the couple does kiss before Brooke breaks it off with Giff.

I didn’t think I would like this story but the characters pulled it out although I clearly see a future romance between solid Giff and the undecided sister of Brooke. B-