This book won the 2015 RITA in the best short contemporary category, and I was curious because it sounded like something I’d enjoy, but I hadn’t heard anything about it. That may be because I don’t go through the Special Edition lists the way I do other lines. This installment is the last of a trilogy focusing on three Texas brothers, but I didn’t need to have read the other two to enjoy this. 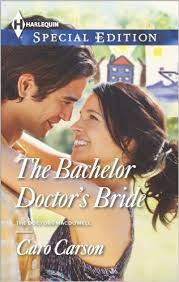 At first I thought this was a Medical romance, but only one of the characters is in the medical profession, so it wouldn’t fit in that line. The heroine, Diana Connor, is a real-estate agent who is offered her boss’s ticket to a fancy charity event. There she meets Dr. Quinn McDowell, a workaholic cardiologist (is there any other kind), who she tries to set up with various attractive and eligible women as dance partners. This sets the tone for the novel: Diana can’t imagine that she has anything in common with the rich, handsome, well-connected doctor. She’s working class, he’s silver-spoon.

I really enjoyed that Diana was in a profession we don’t see very often, even though lots of women wind up getting real estate licenses. And her connection to Quinn makes sense. She finds Quinn’s sister-in-law her house (in a previous book), which gives her connections into a world she doesn’t usually inhabit.

Quinn, of course, is smitten with Diana because she’s not like his usual dates. And she sees through his stiff upper lip to his pain when a beloved patient dies, which leads to a one-night stand. Quinn wants to take it further, but Diana refuses to go along with the compartmentalized relationship that Quinn takes as a given. Of course this makes her even more appealing to him, so they embark on a “real” relationship.

This is not the type of story I usually gravitate toward, but the author does a good job with the setting and Quinn is a believable and yet sympathetic character. He’s driven and committed to his career, but he tries to be honest and honorable with the women he dates. Diana was a harder sell for me. She was so very insecure and unwilling to be honest emotionally. She is portrayed as kind to everyone and always putting on a happy face, but you can’t live a full life like that and you can’t be honest with other people. It’s great that she devotes herself to animals and people in need, but it’s clearly at her own expense. Diana doesn’t really have friends, just people who show up when she provides food and entertainment.

The rich people (aside from Quinn’s family) are pretty awful, especially the women. This bothered me, not least because it wasn’t necessary. It was a way to set up extra conflict and highlight Diana’s genuine qualities, as well as her insecurities. But that could have been done without making entire classes of people look bad.

On the plus side, the setting is well done, and the writing is good. The romance itself is fun to read even though I didn’t really believe in the long-term viability of the relationship. There’s just not enough time that elapses to make me think that Diana was going to be secure enough to believe in Quinn’s genuine appreciation of her, and Quinn was going to require serious effort to be a full partner.

I can see why this got high marks, though. There were moments while I was reading where I was really immersed in the story, and it’s only when I sat down to write out my reactions that I realized the underlying problems. Diana is so appealing, and Quinn embodies the confidence of a distinguished surgeon and businessman while still being believably vulnerable.

I’d recommend this if you like opposites-attract, dogs, and self-aware alpha-ish heroes. But you’ll have to take an overly needy and insecure heroine along with the package. Grade: B-