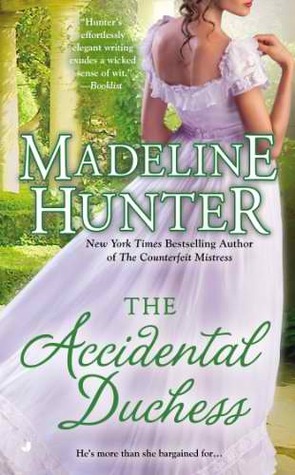 It’s commonplace for the final book of a historical romance series to feature a hero who’s been something of a mystery. The Accidental Duchess goes one better, by having both the hero and the heroine be the least seen and most enigmatic characters in the series. It’s appropriate to give the heroine some of the limelight, since the previous three books have all had a theme of women struggling to achieve their goals and control their lives in a male-dominated society. Lydia is the most overtly fortunate of the four: a privileged member of the wealthy English aristocracy, with no real pressures on her to marry. Yet she is chafing at her confinement in the role of a lady.

Penthurt is a fairly typical last hero: an influential duke, he knows where all the bodies are buried, and how to get things done. He also has a secret of his own, which honor forbids him from revealing: why he killed a close friend in a duel. (Over the course of the series, particularly in The Conquest of Lady Cassandra, we’ve learned that this dearly departed was not the man his friends thought he was.)

Lydia has been an even more mysterious character. Described as once an impetuous, rebellious girl, “animated, loud, and often naughty,” she’s become quiet and self-contained. “Making her better acquaintance these days is like dragging a cart through mud,” says one of her brother’s friends. All we really know about her from the previous books is that she’s curious about sex, is an exceptionally lucky gambler, and was once shocked into quitting a game by Penthurst.

This story opens in 1799. (There were no dates in the previous books, so that’s one mystery solved immediately, thank goodness. I also appreciate that there’s no attempt at the  “oh, la!” dialect of a typical Georgian romance.) It’s a world that is “not rational at the moment.” Lydia is perturbed to receive a blackmailing letter from someone who possesses papers in her handwriting, papers that could be easily misconstrued as treasonous in the current volatile atmosphere. The blackmailer wants such a huge sum of money that Lydia feels forced to take Penthurst up on the bet that had once shocked her, feeling that with her phenomenal luck there’s very little risk:

“You suggested your ten thousand against my innocence, the winner to be determined by a simple draw of the cards.” She tried to sound worldly, as if she discussed such things all the time. She wanted him to know she was no longer the little fool who had been rendered speechless at the vingt-et-un table. His goal had been to dumbfound her. It had worked too well.
“The wager was posed knowing you would never accept it.”
“I know. However, it was never withdrawn either. How careless of you.”

Of course things don’t go as Lydia expected, and she and Penthurst wind up increasingly entangled — a problem, since she has a private reason for loathing him.

Of the two, Lydia is the more interesting character. Penthurst is intelligent, honorable, and protectively domineering in the way of Hunter heroes, but not particularly notable. (There’s a provocative mention of a reason he prefers older women, but it goes nowhere.) Lydia has more inner life. She’s suffering from a grief that no one has realized she’s entitled to, which makes her angry as well. She’s also struggling to be her own person, and gambling — and then giving away the money — is her ticket to feeling she has some independence:

She would like to claim some goodness in doing it, but she received so much pleasure that the gestures almost felt selfish. Nor were her gifts only about charity. With each one she made a little declaration to herself that she had a separate life, was a separate person, and had purpose.

(Incidentally, I had to smack my head for being an idiot when I realized the reason for Lydia’s change of personality — though not as much of an idiot as her oblivious brother. The recurring elements of the series tie together very well.)

The Accidental Duchess is smoothly written, intricately plotted, and consistently engaging, but I didn’t find it compelling or very memorable. Partially that’s because the conflict between Penthurst and Lydia has many echoes of that in The Rules of Seduction, one of my top ten favorite romances — it inevitably came off as weaker in comparison.  I like the graceful mixture of elegance and earthiness in Hunter’s sex scenes, but they have also become quite samey from book to book, always focusing on light male dominance and specific sexual acts. (This one also features an emotional deflowering scene, if that floats your boat.) As a couple, the two have some intense moments and some charming ones — their companionship by the end is delightful — but I didn’t get very invested in them. This is the curse of the voracious reader with a good memory; readers less familiar with Hunter’s work may feel more oomph than I did.

The book as a whole lacked a sense of urgency. It’s understandable that Lydia would conclude that Penthurst would not hold her to the bet; although they’re not longer close, he is her brother’s friend, as well as a gentleman. But even the blackmail plot, which is actually quite significant, feels like a mcguffin; Lydia is very good at putting it in the background of her mind and seems more exasperated by the blackmailer than anything else. There was a sense of the characters often drawing back from more exciting places the book could have gone.

My guess is that readers who enjoyed the previous books in this series will likely enjoy this one to about the same degree. If you found much of the series overly familiar, as I did, the wrap up is unlikely to change your mind. It’s still a better read than many historicals I’ve tried lately. B-