A sports romance! A sexy sports romance!  This is my kind of book. Chad Gamble is an all star pitcher for the Nationals whose contract is up.  Chad takes full advantage of his star power, cavorting with models, actresses and all manner of female flesh. his antics, however, are not impressing management.  .  Other clubs are calling but the Nationals haven’t offered up a deal and Chad wants to remain with the Nationals. His family is all in D.C. and Chad loves his team.  He wants to stay. 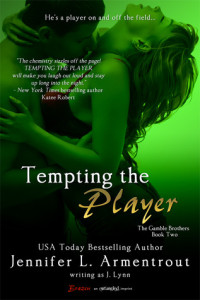 After another sordid picture appears in the tabloids, however, the Nationals come to him and tell him that he either cleans up his act or he isn’t going to get a contract renewal.  A PR maven (not the heroine in this book) provides Chad with a list of do’s and don’ts.

Bridget Rodgers is a friend of the Gamble family.  Her boss is engaged to be married to Chad’s brother.  Bridget has had a crush on Chad for some time but she’s never initiated anything between them.  One night at a sex club, Bridget runs into Chad and he propositions her.  Bridget doesn’t tell Chad their connection and takes him up on the offer.  Unfortunately, in the middle of their hookup, Chad’s phone is texted with an offer from his previous weekend’s hookup.

Bridget is seized with an attack of self consciousness and flees Chad’s place.  The two meet a month later when Bridget goes to lunch with her boss and her boss’s fiance.  After a torrid encounter is captured in the press, the PR maven latches on to Bridget as the perfect antidote for Chad’s bad reputation. If he can date her for some length of time, he would likely be perceived differently by the tabloids and by upper management.  Bridget, a curvy redhead, is as unlike as his previous women.

Chad is presented as this playboy lothario in the beginning but as the book goes on, Chad tries to convince Bridget and the readers that he is not as bad as his reputation.   At times, Chad is so outrageous that I couldn’t tell if you were mocking conventions or playing up the sense of absurd.

I did wonder why Chad couldn’t moderate his lifestyle if he truly wasn’t the playboy.  He wasn’t presented as a sex addict or an alcoholic, why did he find it impossible to keep his exploits out of the tabloids?  Did he secretly enjoy the attention? If not, why couldn’t he be discreet?  Bridget asks this question and Chad simply replies that he shouldn’t have to live his life differently simply because cameras follow him everywhere.

I did get the sense that Chad was an overgrown child with a huge ego.  The ego plays a role late in the book during the characters’ dark moment.  I wished I had believed that he had grown up, but I wasn’t entirely convinced.

Bridget’s lack of self confidence when it came to bedroom antics with Chad seemed misplaced because when she isn’t around Chad, she displays a great sense of self worth and self acceptance about her curvy figure. She knows how to dress it and does so in flamboyant style.  When Chad was with Bridget, he was always panting for her.

I didn’t read the first book in the series and while I felt I missed some things like why exactly the Gamble brothers ran Washington D.C., it didn’t hamper the romance.  The third in the series is between the PR maven and the Gamble brother who plays bodyguard and is cleverly set up with one scene. I appreciated I didn’t get an abundance of sequel bait.  Readers were treated to several scenes of the couple from Book 1, however, and I found the reassurance that these two were blissfully happy irritating.

The story loses steam toward the end when Chad acts like a five year old but not enough for me to come away disappointed. This is a quick sexy read that is fairly superficial but at $2.99, I feel like the reader is getting her money’s worth.  B-

The current Nationals darling is Bryce Harper, National League rookie of the year.  His is well known for his retort to a reporter who asked if Bryce, a mormon, if he liked Canadian Beer with the now iconic “That’s a clown question, bro.”

Most recently, he was seen reaching out on Twitter to the lone remaining star on the Marlins team, Giancarlo Stanton, who took to the micro messaging service to express his unhappiness at the Marlins trading away every piece of talented bat and pitcher.

@giancarlo818 you can always come play for the Nats! We will take you anytime! Get some red, white, and blue in your life!

So while the setup was somewhat believable, I was sorely disappointed at the lack of “bro” incorporated into dialogue. ;)